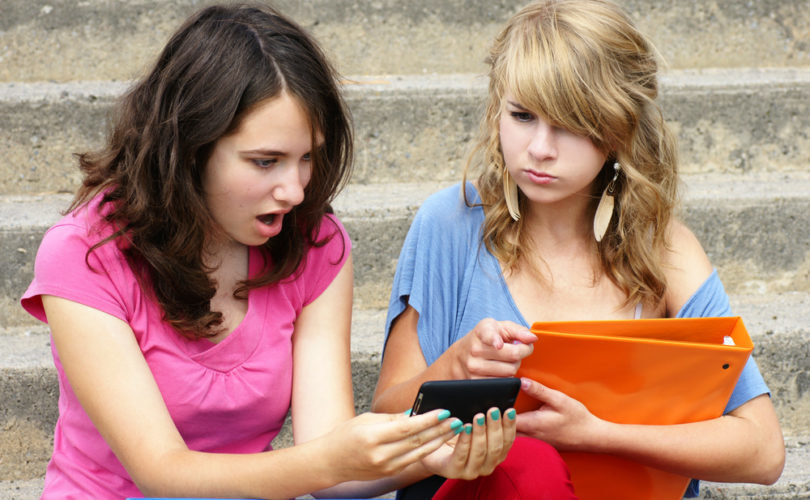 The poll of 500 teens found that 77 percent of teen girls agreed that "pornography has led to pressure on girls and young women to look a certain way."Shutterstock

They also complained that sex education often presents promiscuity as normal, putting additional pressure on them to become sexually active before they might otherwise.

“The images and the type of pornography that young people can access quite readily is much more explicit and more violent than young people have been able to access in the past,” she said.

Eighty percent of the 18 year olds said that it was “too easy for young people to accidentally see pornography online.”

Seven out of 10 said that “accessing pornography was seen as typical” while they were at school, while almost half (46 percent) said “sending sexual or naked photos or videos is part of everyday life for teenagers.”

“The perception is that young people have embraced all of this technology and this is just the way they conduct their relationships and the way they live now,” Ben-Galims said. “Although that part is true, what was surprising is how uncomfortable so many young people feel with the impact of that technology and how easy it is to access pornography, and that is feeding into the their attitudes.”

Ben-Galim said it was evident that pornographic imagery has skewed what some young people see as normal in relationships.

“It is frightening if that is becoming the spectrum of what is normal and expected,” she said.

Part of the survey asked the 18 year olds about their experience with sex education.

Many criticized the sex education lessons they had received at school for not doing enough to discourage them from becoming sexually active, and for not adequately addressing online pornography.

One 18-year-old girl responded to the poll question about her sex-ed experience: “I always felt pressured by teachers, like, 'sex is normal, just be safe OK' when actually I wasn't interested in having sex at the time and was happy to wait for the right person.

“Teaching kids that pornography is almost fantasy is a good idea as well, the amount of plastic surgery, and drugs (viagra, enemas etc.) that are given to the people in the videos should be explained, so that there are no false images in their minds whilst growing up,” one respondent wrote.

The polling data used in the report is available here.

The IPPR survey report titled “Young people, sex and relationships: The new norms” will be published online on August 27.