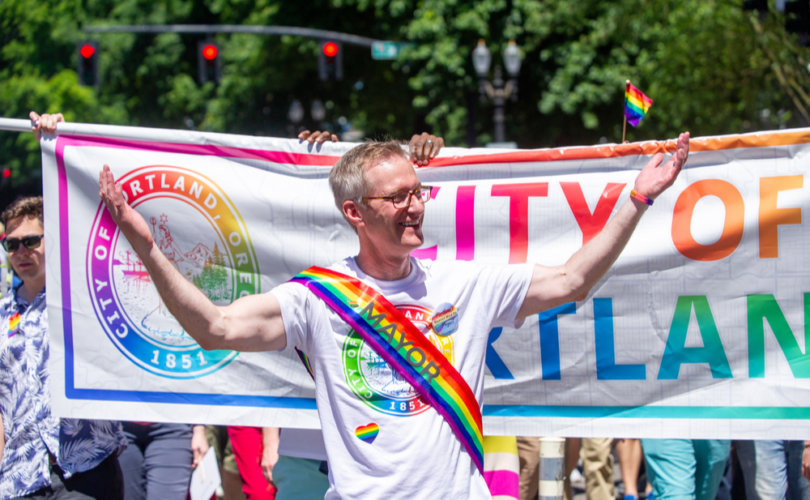 PORTLAND, Oregon (LifeSiteNews) — Portland officials backed down on their pledge to stop buying goods from Texas as a protest of the state’s new limits on abortions when a heartbeat can be detected.

“The City Council in Portland, Oregon, has scrapped a plan to boycott Texas businesses because of a new law that prohibits most abortions there, deciding … instead to set aside $200,000 to fund reproductive care,” the Associated Press reported September 15.

A resolution said the city council “steadfastly believes that all people should have the right to choose if and when they carry a pregnancy, and to obtain an abortion under the care of certified healthcare providers in safe and secure facilities.”

“Texas has put a bounty on every person that may become pregnant as well as the healthcare providers and allies who support people exercising their constitutional right to choose,” mayor Ted Wheeler said in a September 20 statement. “Proclaiming support for reproductive rights is not enough. Declaring allyship is not enough. Portland already welcomes people from around our state and country who seek reproductive care services.”

The city is currently reliant on Texas for an average of $7 million a year in goods and services, according to a city spokesperson. Officials also wanted a ban on taxpayer-funded trips to Texas.

Two days after the Supreme Court denied a request to intervene, Wheeler said his city would soon vote to bar taxpayer funds from being used to purchase services from Texas.

“Mayor Wheeler announced today that the Portland City Council will vote on an emergency resolution next Wednesday, September 8th, with the intent to ban the City’s future procurement of goods and services from, and City employee business travel to, the state of Texas,” his office said. That resolution received a vote on September 15.

Texas Lt. Gov. Dan Patrick criticized the announced boycott on September 6. “Portland boycotting Texas is a complete joke. A city led by depraved officials allows lawlessness, putting their citizens in grave danger,” Patrick wrote on Twitter. “A boycott will hurt them, not us. Texas’ economy is stronger than ever. We value babies and police, they don’t.”

The boycott appeared to be doomed from the start. “The announcement of a possible ban by Portland on doing business with Texas appeared to have come long before the actual policy making,” the AP reported, “as officials scrambled to nail down how such a boycott would work or could impact Oregon’s largest city.”

The Federalist pointed out that the ban could also have included flights from Texas as well as oil, though the city did not answer reporter Jordan Davidson’s questions about the breadth of the potential embargo.

Texas vendors for Portland that could have potentially been affected include Houston-based Aramark Uniform Services, which provides uniforms and food services for institutions such as prisons, universities and city halls. Southwest Airlines is also based in Texas, as is American Airlines.

The boycott, if taken to its logical conclusion, could have also made it hard for city staff to buy computers (Hewlett Packard), toilet paper (Kimberly-Clark) and maintain a cloud or network system (Oracle). Those companies are all headquartered in Texas. Wheeler and other boycott advocates did not put parameters on the protest, however.

Companies with Texas locations have spoken out against the law, too.

Salesforce said it would help its employees move to states where they could abort their babies in response to the heartbeat law.

More than 60 companies have also signed a letter saying that the abortion prohibitions “ban[s] equality.”

“The future of gender equality hangs in the balance, putting our families, communities, businesses and the economy at risk,” the letter said.