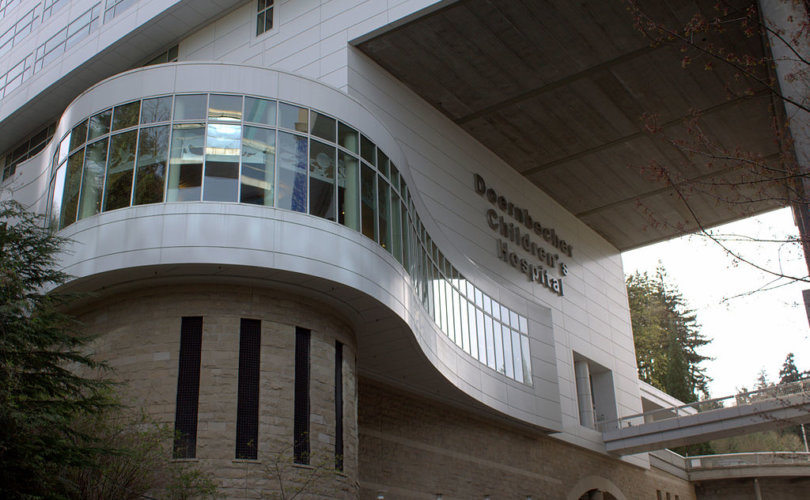 PORTLAND, Oregon (LifeSiteNews) – A children’s hospital in Oregon has been advising young boys on how to “tuck” their genitals in order to appear “smoother and flatter” and directing girls on “chest binding” to inhibit breast growth as part of instructions from its “gender services” team aimed at children confused about their sex.

The Doernbecher Children’s Hospital in Portland, “Oregon’s top ranked children’s hospital” according to the clinic’s website, has a dedicated “gender clinic” with so-called “puberty specialists” on hand to “offer a full range of services for transgender and gender-nonconforming children and teens.”

Part of the “services” offered to children deemed “trans” or “gender-nonconforming” include “hormone therapy” using puberty blocking medication and instructions on “safe tucking” and “chest binding” for children, all administered in a “welcoming and gender-affirming environment,” the hospital states.

In addition, the gender clinic purports to offer “family support from a psychologist, psychiatrist, and social worker” regarding the child’s “gender transitioning” process.

For boys, the hospital advises that “[t]ucking is moving the penis, testicles, or both out of the way. This makes the genital area look smoother and flatter. Tucking can reduce any concerns you have about your body, how your clothes fit and how safe you feel in public.”

“People of all genders can tuck,” the advice states, before cautioning that it will use “the words ‘penis,’ ‘scrotum,’ and ‘testicles’” to describe “body parts that people with tucking needs have, while understanding those words are not for everyone.”

Continuing, the hospital guides boys to push their testicles inside their bodies, in order to disguise their masculinity, and to “pull the penis back” between their legs to secure the placement. Graphic diagrams are provided.

Later, the guidance suggests that boys can purchase “tucking clothing” from a variety of outlets, including “an Etsy shop that offers affordable gaffs and underwear for tucking” which boasts “positive reviews from trans feminine folks,” as well as directing them to SheBop, “a sex-positive adult retailer in Portland for ages 18 and older.”

According to the Post Millennial, a prior version of the guidance handout advised that the shop also sells “sex toys, videos and more.”

A separate document on “chest binding” for young girls advises that the dangerous technique can be utilized by those wishing to “flatten” their breasts. The guidance points out that binding has inherent dangers, including inducing breathing problems, causing a buildup of fluid in the lungs, and can even lead to broken ribs.

The guidelines also point young girls to Portland sex shop SheBop for the purchase of “gender-affirming products,” including chest binders.

Meanwhile, the French Academy of Medicine, an independent but official medical society, published a statement last month decrying the use of puberty blockers in children and teenagers, such as those prescribed by Doernbecher Children’s Hospital, and surgical interventions for young people seeking a gender “transition.”