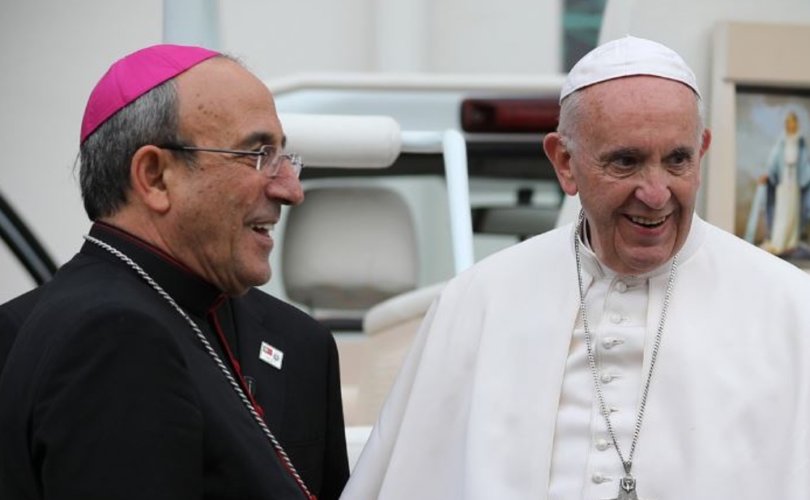 Archbishop António dos Santos Marto, bishop of Leiria-Fátima, in Portugal, prior to becoming a cardinal, with Pope Francis.www.fatima.pt

Three more couples are following a “path of discernment” which will allow them to receive the sacraments after having shown that “they have a good-faith relationship with God.”

The first-ever couple to have obtained such official permission to receive Holy Communion with the approval of Cardinal Antonio Marto of Leiria-Fatima, Portugal, recently went public about their case.

They are a former female catechist and a divorced man who have been in a civil marriage for 10 years. They have been allowed to receive the sacraments since May 2019 after completing a “path of discernment” organized by the diocese of Leiria-Fatima, in Portugal.

The “path” was implemented there in the wake of Amoris laetitia which opens the door to such situations.

The names of Rosalia Rodrigues and Gastão Crespo were revealed on Tuesday in the tabloid Correio da Manhã, which specializes in garish front pages and sensational news, and included a short interview with the couple and with Cardinal Antonio Marto. Pope Francis named Marto a cardinal in June 2018, days after Marto published a “Pastoral note” on May 31st, 2018, giving “pastoral guidelines in view of better ecclesial integration of divorced faithful living in a new union.”

Remarkably, the story came out about the same time that the Argentinian press related how the new President of Argentina, Alberto Fernandez, received communion together with his second official mistress, Fabiola Yañez, although he is divorced and is actively working for the legalization of abortion in his country.

In an added twist, the first time Rosalia, 39, and Gastão, 47, from Leiria, received communion as a divorced and “remarried” couple was May 13, 2019: the feast day of Our Lady of Fatima who appeared to three children from May to October of 1917 in the mountain village of the same name, 30 km away. Since then, they say they are “at peace” and once again feel accepted as “children of God.”

Under the headline “The Church reinstates divorced faithful,” O Correio da Manhã added hard-hitting subtitles: “The diocese of Leiria-Fatima opens the door to spouses in a second union” – “Rosalia and Gastão were allowed to return to Communion and thank the Pope.”

“We’ve gone from a wounded heart to a heart at peace. Thank you, Pope Francis,” Rodrigues told the daily.

Both were actively Catholic before they entered into an adulterous union. According to the Correio, they married civilly 10 years ago and found themselves obliged to “limit their participation in the Church.”

Said Rosalia: “It was painful. It felt like a big gash. I was a catechist and a minister of Communion. I realized, in the moment in which I was getting married, that I would be in a state of adultery.” Gastão added: “We never received Communion again. It didn’t make sense to be in a state of sin. I remain married for the Church and we accepted that consequence.”

It was only when the diocese of Leiria-Fatima, explicitly quoting Pope Francis’ Apostolic Exhortation Amoris laetitia, opened special sessions for divorced and “remarried” Catholics that “a light started to shine in the lives of Rosalia and Gastão,” wrote the Correio. They followed the sessions set up by “Don Antonio’s” pastoral note, which explicitly follow the orientation given by Amoris laetitia. They also quote as a source the guidelines of the Bishops of Greater Buenos Aires, “approved as authentic magisterium by a letter from the Pope,” and those of the Bishops of Germany, Malta, and Emilia-Romagna in Italy. All these directives read Amoris laetitia as allowing the sacraments to be given to divorced and “remarried” couples who remain in their illicit union although their Church marriage was not judged null and void by an ecclesiastical tribunal.

In the same popular newspaper, Cardinal Marto answered the question as to why he “decided to adopt the Pope’s vision for the family.”

“A path had not yet been found for divorced spouses allowing them to be reinstated in the life of the Church and the Christian community, which in this case, can lead to full integration of the sacraments. No one can remain condemned forever, that’s what the Pope said,” he answered.

“Does the Church need to adapt to the times?” the journalist asked him. “Right. It must welcome these families, but this is not only the affair of priests and bishops, communities must do the same,” said Cardinal Marto.

He formally presented the implementation of his “path of discernment” when he inaugurated a new “Support Center for Families” (“Centro de Apoio a Familia, CAF) in the diocesan seminary of Leiria. It caters to families in crisis with a team of 21 volunteers who will give them free psychological, medical, legal and spiritual counseling.

“The family is the best and most valuable intangible heritage of humanity,” said Cardinal Marto. According to the Jornal de Noticias which reported on the inauguration ceremony, the CAF will try to help couples stay together, but it also hopes to “help future divorced couples also to follow this process” of discernment.

Last June, a report on Rosalia Rodrigues and Gastão Crespo, complete with a picture of them with Gastão’s son by his Catholic marriage and the three small boys of the “blended family,” all smiles, was published by their parish journal and then picked up and republished by the communications office of the diocese of Leiria-Fatima. It was titled “A testimony of life.”

Rosalia and Gastão explained that despite having entered into a civil union, they never missed a Sunday mass and made sure their boys were baptized and received catechism. Had Cardinal Marto not instituted his “path of discernment,” things would have remained that way. It was the existence of this “path” that led them to decide to take steps in order to receive the sacraments.

The June article did not reveal that they did exactly that on May 13 – perhaps it was written before – but in it Rosalia and Gastão said that “lately,” they had been “asked” and had “accepted” to become catechists and to join their parish commission.

They also recounted how they had met some time after Gastão’s divorce in 2006: “We fell in love responsibly and it is with full conscience of the religious consequences of our union that we decided to get a civil marriage in 2009.”

Rosalia was a full-time parish social worker and catechist in Santarém (the seat of a spectacular Eucharistic miracle in the 13th century). Gastão was also a catechist and active in the Church. He married in 1998 and had a son. He said he “tried in every possible way” to find reconciliation with his wife, but without success. He also said his marriage was a “conscious and responsible” one for both himself and his wife and therefore valid: “there was no room for a process of nullity.” Besides looking closely after their son, Gastão says he has kept up a “cordial relationship” with the boy’s mother.

The “path of discernment” led Rosalia and Gastão to join bi-weekly two-hour sessions for six months. “At the end of this whole magnificent path, we feel called to the matrimonial vocation and to be even closer to God, even without being united by the sacrament of Matrimony,” they said.

They hope to be “an example” for other couples living in a second union.