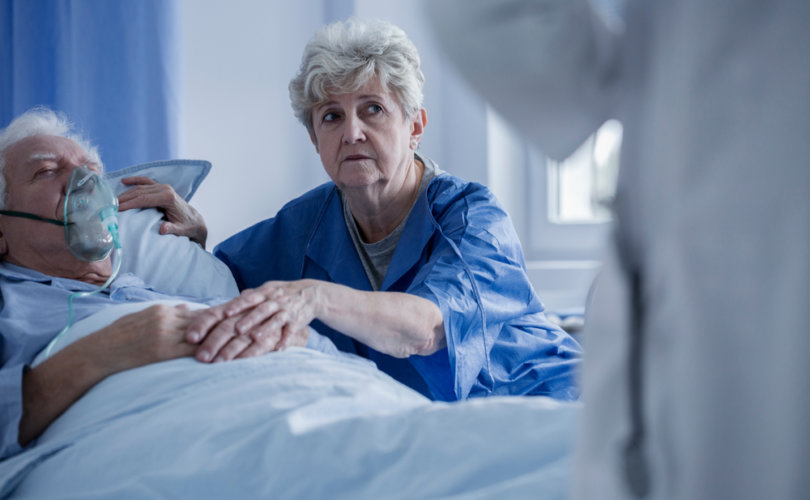 February 25, 2020 (LifeSiteNews) — The Portugese parliament has voted to allow euthanasia and assisted suicide, taking a significant step towards legalizing the state-assisted killing of its citizens.

According to an Associated Press report, the parliament last week approved five “right-to-die” bills, each by a comfortable margin of between 28 and 41 votes.

The pro-life movement in Portugal has been fighting back against the attempt by the government to quickly legalize euthanasia in the country and has been calling for a referendum that would allow citizens themselves to decide if doctors should be killers of sick patients.

Pro-lifers in Portugal told LifeSiteNews that they are still hopeful of gaining the 60,000 signatures needed to request that a referendum be held on the issue.

As of today, a petition for a referendum on euthanasia has been signed by roughly 22,000 people online. Campaigners in Portugal told LifeSite that they now have over 40,000 petitioners in total through simultaneous efforts on the streets of Portugal to collect signatures. Only citizens are able to sign the petition. However, should the necessary amount of signatures be collected, the parliament would still need to approve the referendum.

President Marcelo Rebelo de Sousa, who is reportedly “reluctant” about euthanasia, could “veto” the new laws, but the parliament could override this by voting in favor of them again. The Portugese head of state does not have any executive powers and so cannot conclusively stop the passage of the laws.

The bill will now be discussed by the parliament’s constitutional affairs committee, who have the power to amend it. Following this it will be presented as one piece of legislation back to the parliament for a final vote.

In its present form, the legislation would introduce euthanasia and physician-assisted suicide for patients suffering from “unbearable” pain “without a hope for a cure.” The person must be over 18 years old and supposedly not be suffering from mental illness. Two doctors would be required to approve the death – one who specializes in the involved illness and a psychiatrist.

Portugal’s constitution states that human life is “sacrosanct,” but abortion has been legal in the country since 2007.

According to the Associated Press report, before lawmakers voted, hundreds of pro-life protestors gathered outside the parliament. They carried banners and religious images and chanted in opposition. One banner said, “Euthanasia doesn’t end suffering, it ends life,” and some protesters chanted, “Sim a vida!”, meaning “Yes to life!”

Francisco Guimaraes, a 21-year-old protestor, told Reuters that he believes “life is an inviolable asset, human life has an inviolable value, consecrated by our Portuguese constitution – thank God. We must care for life until it comes to its natural end.”

The parliament acknowledged the significance of the pro-death votes by using a voting procedure normally reserved for moments such as a declaration of war. Lawmakers were reportedly called, in alphabetical order, to state their vote on each bill, rather than the normal process of voting electronically.

Isabel Moreira, a member of the governing Socialist Party, said during the debate in the parliament that the new laws would mean that “everyone can be the architect of their own destiny, as long they don’t harm others.”

Telmo Correia, a lawmaker from the People’s Party, said that euthanasia is “a sinister step backward for civilization.” He also pointed out that none of the parties who introduced the euthanasia bill had mentioned the issue in the run up to last year’s general election.

Portuguese pro-life campaigner Rodrigo Faria de Castro told LifeSite that the Portuguese Medical Associations, Nurses Association, and the National Council of Ethics for the Life Sciences were all against the euthanasia bills.

“These bills arrived from the left, far left, and liberal parties. The Socialist Party, that is in power, had no references about this issue in its political program prior to last October elections. But because the Socialist Party doesn't have a majority in parliament they had to give something back to the far left parties,” he said.

His comments echo those of André Ventura, leader of the new nationalist party Chega – which means “enough” – who appealed to the president, saying “a country where there is no palliative care, in a Parliament that refuses to criminalize the abandonment of the elderly, will now decriminalize their death and will now allow them to have the so-called assisted death.”