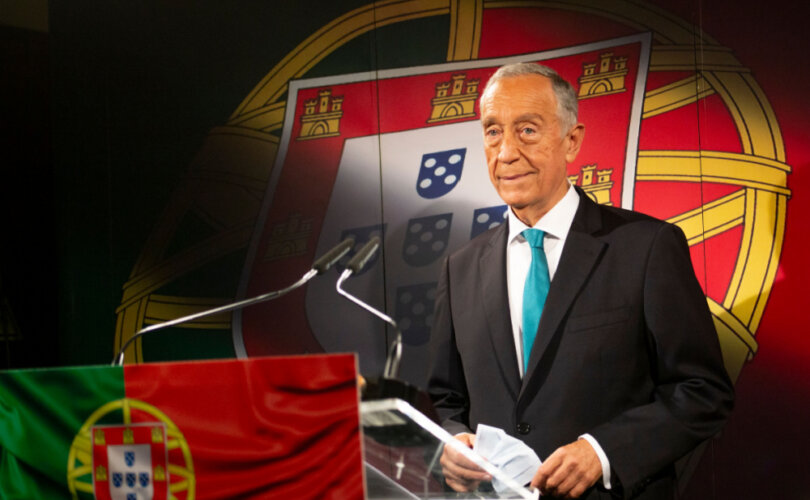 VATICAN CITY (LifeSiteNews) — The president of Portugal voiced his displeasure last week at the Vatican’s restrictions on official delegations and heads of state that many countries in Europe and elsewhere were sending to the funeral of Pope Benedict XVI.

The Vatican had officially invited delegations only from Italy and Germany and stated that any other delegations or heads of state would be attending in a private capacity. The Secretariat of State further asked such delegations to refrain from wearing formal attire as dignitaries, an honor ordinarily accorded even to a deceased cardinal.

Portugal President Marcelo Nuno Duarte Rebelo de Sousa, however, took issue with the statement that heads of state were attending in a private capacity. Speaking to journalists in the Lisbon airport, he said, “I’m not going personally; the President of the Republic does not go to these things personally; he goes on behalf of the Portuguese State.”

Insisting that he was representing the country of Portugal in attending the late pontiff’s funeral, the president said, “It is not the citizen who goes there; if it were the citizen, I would not go there. Obviously, what matters is to represent the Portuguese state, for a very simple reason: Portugal will organize the World Youth Day here and this is a very relevant fact in relations with the Catholic Church and the Holy See and has universal projection and, just for this fact, justifies my going there.”

— Article continues below Petition —
Stand with brave priest who was SUSPENDED after defying the LGBT agenda against his abbot’s wishes!
Show Petition Text
12817 have signed the petition.
Let's get to 15000!
Thank you for signing this petition!
Add your signature:
Show Petition Text

Portugal was one of many countries, both within Europe and beyond, to send either heads of state or special delegations to the papal funeral. These included, among others:

In addition to downplaying the presence of dignitaries of state at the papal funeral, it was noted that no official mourning was declared in Vatican City or in its extraterritorial dependencies and nunciatures. Within the Vatican walls, the death bell did not toll or were flags hung at half-mast. In contrast, Italy, Spain, and Britain flew flags at half-mast to commemorate the late pontiff after his death.

In another sign of indifference to the burial of Pope Benedict, Vatican workers, both clerical and lay, reportedly were only granted leave for the morning of Jan. 5 to attend the funeral after making known their intentions to take the day off should the normal working schedule not be suspended. The work schedule officially resumed at 1 p.m. that day.

Another disappointment reportedly came when many cardinals and bishops were not able to be part of the procession in which the body of Pope Benedict was transferred from the Mater Ecclesiae monastery to St. Peter’s Basilica for viewing by the faithful. In any monarchy, this procession is especially solemn, even if it is for one who is not the reigning monarch.

During the procession, the body of the late pontiff was oddly transferred to the basilica in a gray van rather than a black funeral hurst, and neither Pope Francis nor the Cardinal Vicar presided over ceremonies. Instead, Pope Benedict’s personal secretary, Archbishop Georg Gänswein, presided over the transfer of the body, accompanied in the procession by the women who assisted them in recent years.

Pope Francis also refused to attend the actual burial of his predecessor in the Vatican grottoes in the crypt of St. Peter’s after the funeral, and reportedly had to be persuaded not to leave the funeral prior to the coffin being carried into the basilica.

Such incidents of indifference and apparent snubs to both the deceased Pope emeritus, the cardinals and bishops of the Church who wished to honor him in death, and the numerous heads and dignitaries of state who came to Rome to pay their last respects, perhaps show how deeply the late pontiff was hated by those who have done everything in their power to undermine the good he sought to do in the Church, dismantling and undoing one good thing after another.

When those who hold secular power must reprove the highest-ranking officials of the Church for failing to properly honor in death a departed pontiff, and certain marks of respect afforded even ordinary Christians are found to be lacking, it is woefully revealing of the terrible state in which the Church and the Vatican currently finds itself.

The darkest point of the papacy of Benedict XVI