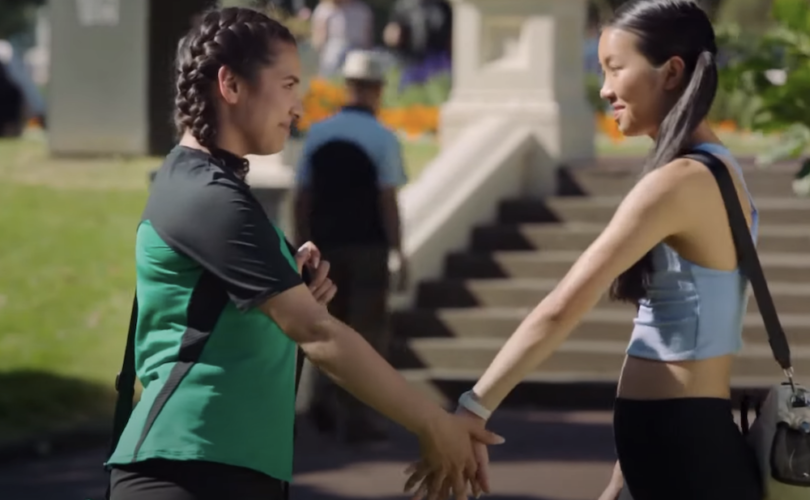 (LifeSiteNews) — Yet another long-running kids entertainment franchise has taken steps to appease LGBT activists’ demands for “representation” by revealing a character as homosexual, this time with a member of the Power Rangers superhero team.

Power Rangers debuted in the United States in 1993 as a blend of action footage from the Japanese series Super Sentai with American-filmed story elements, and quickly became a pop-culture phenomenon. It is currently in its 28th season, Power Rangers: Dino Fury, which airs on Nickelodeon.

In a scene from an upcoming episode (which was originally viewable in a tweet that has since been made private) that has aired in France but not yet in the U.S., the Green Ranger, Izzy (Tessa Rao), is seen walking off to dinner, hand-in-hand, with female companion Fern (Jacqueline Joe).

To make clear the moment is not just one of platonic friendship, it’s prefaced by a conversation in which one of Izzy’s male teammates says, “I thought she had feelings for someone,” to which another says “you weren’t wrong” and gestures to the new couple.

Dino Fury executive producer Simon Bennett took to social media to tout the “overdue” development, and confirm that it was done with the support of the show’s owner, toy company Hasbro, as well as longtime Power Rangers producer Judd “Chip” Lynn.

Also staff writers Maiya Thompson and Guy Langford – as well as support from Chip Lynn and everyone at Hasbro.

I assure you, it was no marketing ploy. And yes, we’ll overdue.

Notably, despite declaring that there was “nothing morally or ethically problematic with being LGBTQI+” (without addressing whether or not it was age-appropriate subject matter for the show’s target demographic), Bennett also claimed that the “cops and robbers”-themed Sentai series Lupinranger vs Patranger was rejected for adaptation partly on the grounds that police-themed Power Rangers would be “problematic in today’s climate.”

There's nothing morally or ethically problematic with being LGBTQI+

While this overture to LGBT activists is the most explicit, most visible, and the most directed at children, it is not the first for the franchise. While aimed at a slightly older audience, the 2017 Power Rangers reboot film (rated PG-13) hinted at the potential LGBT status of Yellow Ranger Trini (Becky Gomez) by having her decline to answer whether she was having problems with boys or girls. Director Dean Israelite said the message of the scene was that Trini “hasn’t fully figured it out yet,” and “that’s OK.”

The moment was part of a broader effort to depict the teen heroes as more troubled and complex than the wholesome role models of the original series. While that decision won praise from some, the film ultimately lost the studio an estimated $74 million.

Whether intended to promote social agendas or merely to appease vocal and persistent “representation” demands, this infusion of children’s shows with LGBT characters and messages inevitably forces families into discussions for which parents may feel their children are too young, as well as sets impressionable young viewers on a collision course between the shows’ feel-good presentation of controversial issues and parents’ own values.