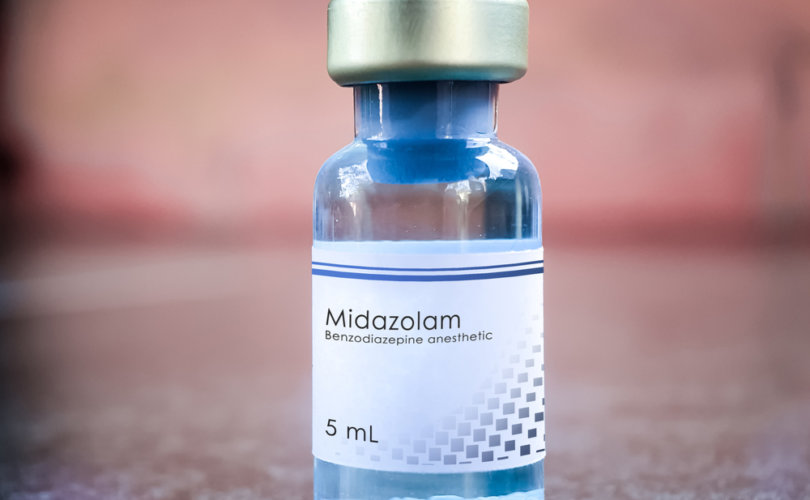 (LifeSiteNews) — Former Pfizer Vice President Dr. Michael Yeadon has suggested that a powerful drug may have been used intentionally to hasten the deaths of COVID-19 patients in U.K. nursing homes during the peak of the COVID-19 pandemic.

According to Yeadon, who had also served as the chief scientist of allergy and respiratory research at Pfizer and is now the chief scientific advisor for the Truth for Health Foundation, information has “come to light” indicating that the drug midazolam (a potent sedative which can cause fatal respiratory depression)  has “played an important role in the spring 2020 excess deaths.”

“It is alleged that medical procedures were distorted substantially and that, essentially, this drug was used to kill people, very large numbers of people, in the U.K.,” during the early days of the COVID response, Yeadon said during an online conference last year.

The shocking claim, which the U.K.’s Association for Palliative Medicine has strongly denied, is supported by figures which indicate that out-of-hospital prescriptions of midazolam more than doubled in April 2020 compared to prior months, according to the Daily Mail.

While for the past five years an average of 15,000 out-of-hospital midazolam prescriptions were reportedly written monthly in England, in April 2020 that number skyrocketed to 38,582, the Daily Mail reported.

Midazolam is similar to, but “twice as powerful” as diazepam (more commonly known as Valium). It “reduces anxiety, relaxes muscles and, if enough is given, provides ‘total sedation’ for dying patients in extreme pain or distress,” the report continued.

Though a widely used sedative in hospital settings, the depression of breathing caused by the drug can be fatal, particularly in people with suppressed immune systems.

According to an article published by CovidVaccineHub in June 2021, “Midazolam has a United States Food and Drug Administration [FDA] black box warning, which notes that the medication has been associated with respiratory depression and arrest because it can slow or stop breathing.”

“Black box warnings are issued to consumers when medications or products may have serious or life-threatening side effects that could lead to severe illness, hospitalizations, and death,” the resource noted.

This isn’t the first time that Pullicino, who earned his M.D. at the University of Malta and trained at the National Hospital in London and the University of Rochester in New York, has warned about healthcare providers using drug protocols to effectively euthanize critically ill patients. In 2012 Pullicino raised the alarm about the Liverpool Care Pathway (LCP), a protocol for treating the terminally ill, arguing the method was a “death pathway.”

According to the Daily Mail, Pullicino suggested that in reference to COVID-19 deaths, a flowchart which was designed to help healthcare workers triage COVID patients had “wrongly consigned those deemed too frail to end-of-life care.” For Pullicino, this meant that some patients who may have been helped by being put into intensive care were never taken to the hospital but were instead given drugs like midazolam.

“Certainly there have been more [unavoidable] deaths because of Covid-19,” Pullicino said. “But to me this flow-chart encouraged use of end-of-life sedation with midazolam — effectively resulting in euthanasia pathways.”

Yeadon said that the evidence that midazolam was used to hasten deaths can be found in an assessment of midazolam supply quantities which surged during the early days of the pandemic.

“[F]or the whole of the year 2018–19, normal quantities of this material were ordered but not dispensed, so the whole year’s worth of stock was required,” Yeadon said. “And then early in 2020 the generic suppliers of midazolam ordered [a] two-year’s supply which was delivered. Which meant as we went into the beginning of the lockdown, there [was] a three-year supply of this end-of-life drug.”

Yeadon also pointed to a graph depicting the increase in midazolam prescriptions which he called “prima facie evidence that U.K. government & certain actors within the NHS [National Health Service] & the care home sector deliberately planned for & then executed such a plan to murder tens of thousands of trusting people using respiratory the depressant drug, midazolam.”

According to Yeadon’s assessment of the data, “[t]he record show[s] that two years stock was purchased from one supplier & shortly afterwards, use spiked to up to 300% of baseline values.”

Per Yeadon’s claims, on April 27, 2020, Accord Healthcare in the U.K. — one of five manufacturers of the drug — issued a memo noting that it had ordered midazolam from a French supplier to mitigate a “supply disruption” and ensure adequate quantities of midazolam were on hand to contend with COVID-19 through October of the same year.

According to The Pharmaceutical Journal, a spokesperson from Accord Healthcare said the company “had to gain regulatory approval to sell French-labelled supplies of midazolam injection to the NHS, after having already sold two years’ worth of stock to UK wholesalers ‘at the request of the NHS’ in March 2020.”

Meanwhile, U.K. Health Secretary Matt Hancock announced a loosening of restrictions on painkillers in care home and hospice settings, ostensibly to ensure that COVID patients weren’t subjected to unnecessary suffering leading up to their death.

It’s unclear whether the sharp increase in midazolam prescriptions can be causally linked to an increase in nursing home deaths, or whether the U.K. government ordered high quantities of midazolam in a bid to deliberately speed up the deaths of terminally ill COVID patients. It’s also unclear whether the spikes in U.K. COVID deaths more broadly can be causally linked to increased drug prescription, when the relationship may be correlative.

Along with the U.K.’s Association for Palliative Medicine, the article published by CovidVaccineHub has denied that the use of midazolam in COVID-19 patients had hastened deaths, arguing instead that the drug “was most likely used on ventilated patients with COVID-19,” since the sedative is a “commonly used” drug used in the ICU.

“This medication is frequently used in critically ill patients to keep them calm, allow their bodies to recover through rest, and ease discomfort and other physical symptoms,” the resource stated.

However, the explanation does not address the alleged prescription of midazolam to COVID patients in nursing homes who were never admitted to the hospital and therefore would not have gone to the ICU.

Meanwhile, some, including Robin Monotti, an Italian film producer, activist, and outspoken critic of lockdowns and other restrictive COVID-19 measures who frequently posts in cooperation with Yeadon, have pointed out that reports suggesting people died “of COVID-19” after receiving drugs like midazolam are suspect, and have urged the assessment of the data to ascertain whether it was the virus or the drugs that more directly led to the deaths.

Over-prescription of midazolam is not the only charge levied against the U.K. government for its handling of the COVID-19 response with regard to nursing home residents.

In October 2020, Amnesty International, a non-governmental organization comprised of some 10 million members worldwide, reported that “[o]lder people in care homes” had been “abandoned to die amid government failures during [the] COVID-19 pandemic.”

“Key failings included decisions to discharge thousands of untested hospital patients into care homes and imposition of blanket DNARs [Do Not Attempt Resuscitation orders],” along with allegedly leaving care home staff and managers “without guidance, PPE or access to testing,” the group alleged.

Amnesty International’s complaints line up with those of Dominic Commings, a former advisor to British Prime Minister Boris Johnson who in May 2021 told a committee of MPs that “tens of thousands of people died, who didn’t need to die” due to mistakes made by the government, the BBC reported.

With over 42,000 COVID-related deaths in the U.K. occurring in nursing homes, according to the Office for National Statistics, Cummings contended that assurances that elderly people “were going to be tested before they went back to care homes [from hospitals]” were proven false.

The allegations regarding the U.K. government neglecting proper care for nursing home residents also mirror similar charges from across the pond in the United States, where disgraced former New York Gov. Andrew Cuomo was hit with a massive scandal after evidence emerged that elderly New Yorkers who had tested positive for the virus were shipped back into nursing homes where they succumbed to their illnesses without receiving proper treatment.