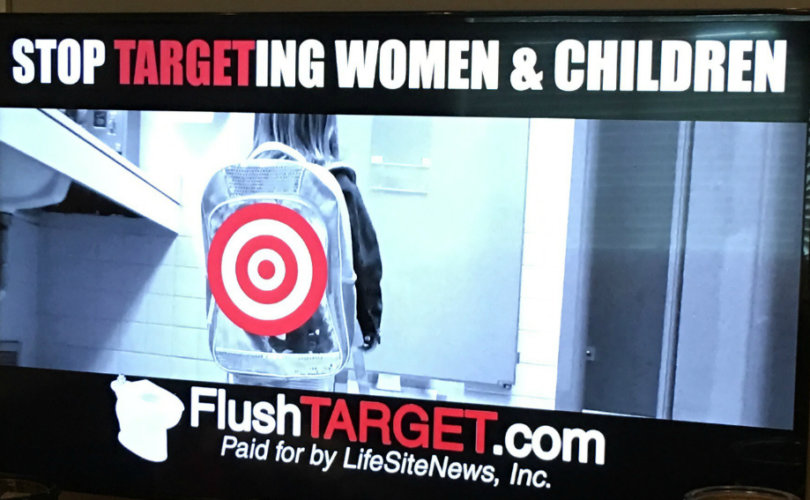 MINNESOTA, May 31, 2016 (LifeSiteNews) – A powerful LifeSiteNews ad showing the dangers of Target’s new mixed-sex bathroom policy will reach hundreds of thousands of homes in Target's home state of Minnesota, and parts of western Wisconsin.

The 30-second ad is part of LifeSiteNews’ “Flush Target” campaign, which is urging customers to boycott the retail giant until it reverses its new policy allowing men, including registered sex offenders, to access women’s restrooms and changing rooms.

“Target’s new policy emboldens predators and threatens women by allowing any man on any given day, for any reason, to use the women’s bathrooms or fitting rooms,” said Claire Chretien, national spokeswoman for LifeSiteNews.com. “This is the opposite of pro-woman. It perpetuates rape culture and opens the door—literally—for attacks on girls.”

“We anticipate that the ads will motivate even more customers to join us in calling on Target to rescind its dangerous policy,” Chretien continued.

The “Flush Target” campaign consists of a large billboard truck that is visiting every Target store in the company’s home state of Minnesota. LifeSiteNews was forced to use a billboard truck after all four billboard companies in Minnesota refused to print the anti-Target message.

On Wednesday, the truck will have visited every single Target store in Minnesota.  It may expand to visit stores in additional states.

Target Corporation stock has dropped by 19 percent since the company announced its mixed-sex bathroom and changing room policy and more than 1 million people subsequently signed a petition promising to boycott Target.  CEO Brian Cornell has defended the policy despite public outcry, comparing allowing men in women’s intimate facilities with racial equality. Target has publicly blamed its poor performance on “damp and cool weather” and “skittish” customers.

“We will continue this public relations campaign until Target reverses its policy and puts the safety of women and young children ahead of its sexual ideology agenda,” Chretien concluded.

NOTE: Donations to the #FlushTarget campaign can be made online.