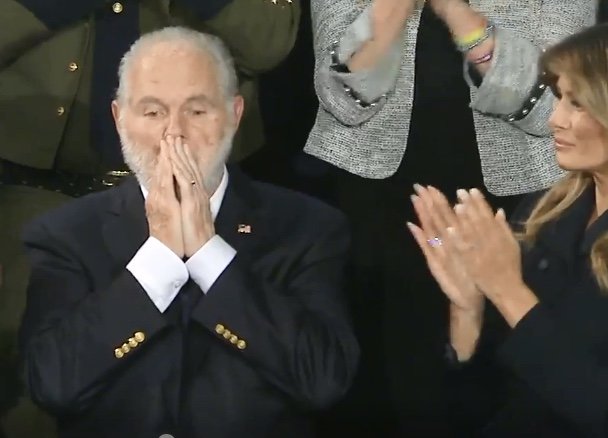 Talk show host Rush Limbaugh was stunned to receive the Medal of Freedom at the State of the Union address.

WASHINGTON, D.C., February 5, 2020 (LifeSiteNews) – President Donald Trump’s annual State of the Union address won rave reviews from right-of-center observers for its tone and content, while left-wing reactions tended to center on one of the guests the president recognized, as well as House Speaker Nancy Pelosi’s unusual action afterward.

Trump touched on a wide range of topics during the speech, from calling on Congress to ban late-term abortions to reiterating the administration’s commitment to conservative judges and religious liberty. But the most memorable moments involved the guests in attendance.

One of those guests was military wife Amy Williams and her two daughters, whom the president shocked and delighted by announcing the return of her husband, Sergeant First Class Townsend Williams, from deployment during the speech:

The moment @realDonaldTrump surprised a military family with a very special homecoming. #SOTU

The other, more controversial moment came when the president recognized talk radio giant Rush Limbaugh, who announced Monday that he has been diagnosed with lung cancer. Trump caught the veteran pundit in a rare moment of genuine surprise when he announced and awarded him the Presidential Medal of Freedom on the spot:

Last night, Rush Limbaugh was at the State of the Union.

He received our country’s highest civilian honor, the Presidential Medal of Freedom.#SOTU2020 pic.twitter.com/YYCEBV0KZZ

Democrat, left-wing, and anti-Trump observers heaped scorn on the move (with more than a few confusing the Medal of Freedom, a civilian award for all manner of charitable ventures and cultural contributions, with the Medal of Honor, which is for gallantry in military service):

Rush Limbaugh's most infamous act was calling a young grad student a slut for testifying in favor of contraceptive coverage. A terrible diagnosis does not erase a lifetime of racism, homophobia and misogyny. A sick man deserves healthcare; a bigot does not a medal of honor. #SOTU

When Rush Limbaugh receives your Medal of Freedom, you’re officially a sh*thole country.#VoteBlue

Rush is nearly deaf. His implant doesn’t hold up well in crowds. He likely didn’t hear 90% of what was said and was trying to be gracious while not understanding it all. Not to mention how overwhelming the moment was in its own right. Also, he’s obviously sick. So… piss off. https://t.co/kXDJQFdgkl

Conservatives reacted much more warmly to Limbaugh’s moment, and to the address more generally:

This SOTU was great. Let's be real: Trump is great at SOTUs. If this were full time Trump, he'd win 55 percent of the vote. Which is why he should do this all the time instead of rage-tweeting about his opponents' height.

Trump, a man who frequently annoys me despite my appreciation for his governance and accomplishments, a man who they just embarrassed themselves trying to impeach, just delivered a grand slam #SOTU, one of the best I've ever heard.

I am not generally a Trump fan, but haters should probably just admit this was a pretty great speech that most people would like and agree with… and Dems looked super petty. #SOTU

Lastly, much has been made of Democrat House Speaker Nancy Pelosi ripping a copy of the speech in half just after the president concluded:

Nancy Pelosi rips up President Trump's speech… this is all they have… Tantrums. pic.twitter.com/gi3JP8lVWp

Pelosi reportedly defended the move Wednesday during a private meeting with fellow Democrats, declaring that Trump “shredded the truth, so I shredded his speech.” Republicans condemned the act as petty, while Jody Jones, a SOTU guest whose brother was murdered by an illegal immigrant in 2018, said it “felt like she ripped our hearts out.”