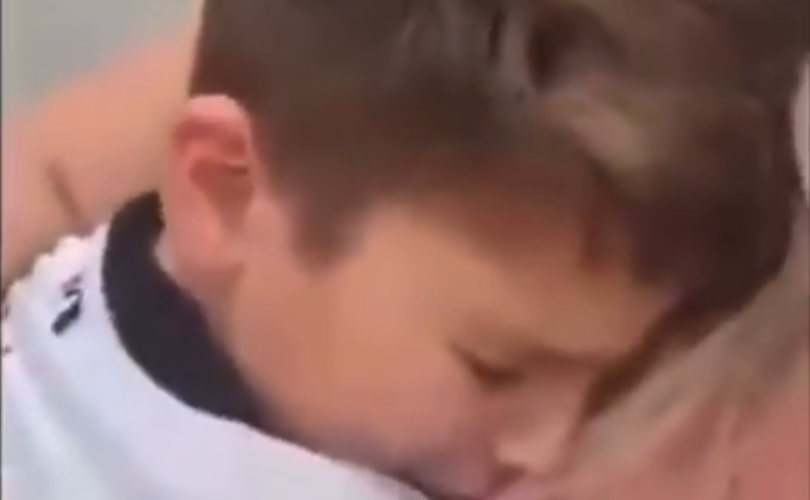 (LifeSiteNews) — Captured in a video circulating widely on social media, a relieved elementary school boy shed tears of joy when his mother told him he would no longer need to wear a mask at school because she took the school to court over its mask mandate and won.

The emotional moment has been taken as a sign of hope that mask mandates and other COVID policies can be overturned through on-the-ground political pressure and reveals the heavy toll restrictive COVID-19 measures have taken on everyday families.

In the video, shared on Twitter by conservative writer Cassandra Fairbanks Sunday, the boy is met by his mother as he returns home from school.

“Can I tell you something?” the mother asked, greeting her son on the front lawn as he approached holding a mask in his hand and a soccer ball under his arm.

“So, there were some parents… some of my friends, who took the school to court. Okay? They took them to court, saying they can’t mandate masks,” the boy’s mother said.

Audibly choking up, the mother concluded, “And we won!”

Dropping his ball and backpack, the boy immediately rushed to his mother, hugging her tightly as the pair cried tears of relief.

“Starting tomorrow, baby, you don’t have to wear it,” the boy’s mother told him.

“It’s gonna be so weird,” the child answered, through tears.

School mask mandates have been in effect in most states throughout the U.S. for over a year, after in-person learning returned following the shut-down of schools in early 2020.

Taking note that the boy said it would “be so weird” not to be forced to mask up in school, Walsh, who has spoken at several school board meetings this year to decry mask mandates and radical ideological curricula promoted in the classroom, said “I would feel the same way if I was forced to wear a mask for seven hours a day, five days a week, and I finally was told I could take it off. I think I’d have the same amount of relief.”

“The little kid’s overcome with emotion, he doesn’t have to wear the mask to school anymore. And you could see why he would feel that way,” Walsh said.

“But you hear him say there, ‘Oh it’s going to be so weird not wearing a mask,’ even though he’s happy he doesn’t have to wear it. And this is with a kid who still has his head on straight, fortunately, enough that he doesn’t want to wear it. Even for him, the idea of not wearing a mask is kind of weird, because this has been imposed on him so much,” he continued.

Walsh added that some children, unlike the boy in the video, would be upset to be told they would no longer need to wear masks.

“There are some kids, if they were to be told they can’t wear the mask anymore, they’d be upset and afraid,” the podcaster said. “Not because they need it, but because they have become so psychologically dependent on it and they’ve been convinced by the abusive adults in their life that the air itself is toxic and if they breathe it they might die.”

Walsh also argued that regardless of the protestations of masking advocates who claim the masks are harmless, requiring children to mask up all day throughout the school week is “no small thing.”

“So you see this kind of conditioning,” he continued. “Even with a kid who has resisted it up until now. But more importantly, what you see from there is that this is no small thing, telling kids to wear the mask every day.”

Like Walsh, parents across the country have vocally objected to mask mandates in schools, leading to a surge of contentious school board meetings which have generated national attention.

The Biden administration has acted to punish parents for speaking out against objectionable school policies, mobilizing the Department of Justice to empower the FBI to go after the parents for engaging in alleged “harassment, intimidation, and threats of violence against school administrators, board members, teachers, and staff.”

The move comes in spite of data showing children are not at significant risk from COVID-19, nor do they spread the virus in any substantial way.

Last week, Townhall columnist Scott Morefield cited data which found that in Florida – which has been targeted by the media as a COVID free-for-all after Gov. Ron DeSantis acted decisively to ban mask mandates in schools – there was no statistical difference in September juvenile COVID rates between counties with or without mask requirements in school districts.

Data from Florida schools both with and without mask mandates shows that masks on kids make no difference inside schools when it comes to covid cases. If science truly mattered no kids would be wearing masks in schools anywhere in America. pic.twitter.com/ytZfLlEwEJ

In his Monday commentary Walsh slammed advocates of masking, whom he called “mask cultists,” for attempting to accuse those opposed to widespread masking of being “petty and weak,” when mask promoters are the ones “that don’t want to leave their house without a muzzle on their face.”

“I guess the mask cultists – those of us who say we don’t want to wear the mask, we’re accused of being petty and weak, like somehow we’re the cowards,” he said. “I love that, the way they flip that one around. Somehow, they don’t want to leave their house without a muzzle on their face, and we’re the cowards if we’re willing to walk outside and breathe fresh air. We’re the cowards for not wearing it. That’s how they want to flip it around. Are they going to say that to that child there who doesn’t want to wear it anymore? I guess so.”

Earlier in the segment Walsh connected the emotional video depicting a small moment of relief and victory in an ordinary family, to Southwest pilots who are believed to have caused a major disruption in services by calling in sick over the weekend to protest the Dallas-based airline’s COVID-19 vaccine mandate.

“When you do that, here’s what can happen.”