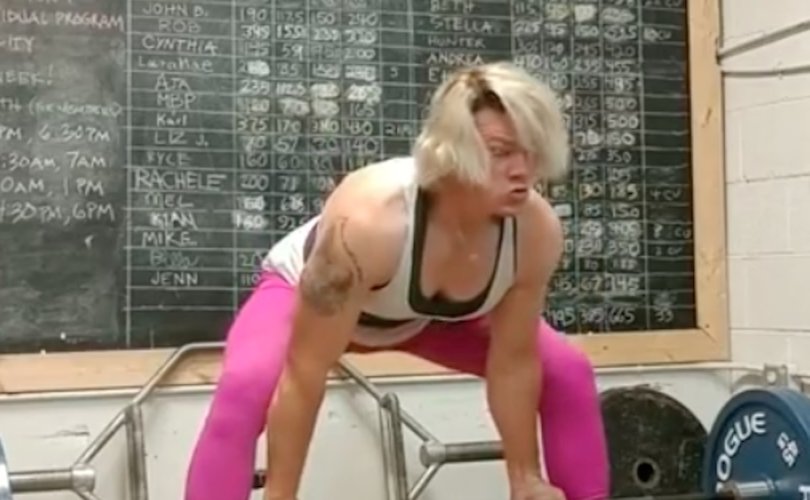 May 14, 2019 (LifeSiteNews) — The 100% Raw Powerlifting Federation has revoked titles and trophies given last month to American powerlifter Mary Gregory for ostensibly breaking multiple records last month, on the grounds that Gregory is actually a male and therefore ineligible.

But the news was soon met with disapproval from various corners, including several Olympic athletes, including British swimmer Sharron Davies and British track athlete Kelly Holmes:

Its a bloody joke and all getting ready for biological women to boycott certain events.Have a trans category if need be but even better a trans games.Otherwise i’m starting to worry about the backlash and abuse that the trans community will get from spectators. It will happen!

The reason we have men & women’s races are because we are biologically different. Performance 100% confirms that. The reason steroids (including testosterone) are on the banned list is because using them gives you an advantage. FairPlay is racing by biology by sex not by gender

On May 1, 100% Raw president Paul Bossi released a statement explaining that Gregory had registered for the competition as female, but “our rules, and the basis of separating genders for competition, are based on physiological classification rather than identification.” Because Gregory is “actually a male,” 100% Raw concluded that “no female records will be broken by [his] lifts,” and eventually, Gregory “will be placed in a different category once the Transgender Division is introduced with a new policy.”

“It infuriated me,” Gregory told Outsports. “I feel like I’m being tarred and feathered as this person who got in there, competing against 50 women, and just stomping all over them, and won by some magnificent total. Not to denigrate my own accomplishments or achievements, I’m so very proud of them, but the numbers that I lifted aren’t class leading.”

Gregory has not undergone so-called sex reassignment surgery, but he says he’s been taking estrogen and spironolactone for the past eleven months, which he claims has reduced his lifting ability.

“Men naturally have a larger bone structure, higher bone density, stronger connective tissue and higher muscle density than women,” USA Powerlifting argues. “These traits, even with reduced levels of testosterone do not go away. While MTF (male-to-female) may be weaker and less muscle than they once were, the biological benefits given them at birth still remain over than [sic] of a female.”

Gregory told Outsports that even if he can no longer compete for women’s titles, he plans to continue participating in the sport by serving as a referee with USA Powerlifting.