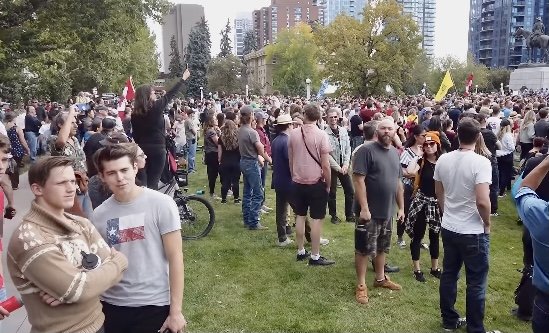 CALGARY, Alberta (LifeSiteNews) – Well over 7,000 people took to the streets in the largest protest to be held in Alberta against COVID vaccine mandates and passports on Saturday. Making an appearance at the event held in Calgary was People’s Party of Canada (PPC) leader Maxime Bernier, who called for Canadians to “fight” for their rights.

“There’s a real freedom revolution in this country. We know, that when tyranny becomes law, revolution becomes our duty,” Bernier said to a crowd of thousands at the Calgary Worldwide Rally for Freedom.

“We know that without freedom, there’s no human dignity, there’s no equality of rights, there’s no economic prosperity. Freedom is the foundation of our country, of our civilization values. We will always fight for what we believe openly and with passion and conviction.”

The Calgary protest was part of what was billed as “The Worldwide Rally for Freedom,” which saw more than 180 cities worldwide participate, including many Canadian cities.

The march began with a rally at Calgary’s Central Memorial Park, which saw many speakers address the crowd.

Lawyer Katherine Kowalchuk from the Calgary group Lawyers 4 Truth spoke at the rally, saying the Alberta government is trying to “divide” the population.

“What the government is doing right now is about creating division and chaos,” Kowalchuk said.

“They (the Alberta government) want to divide us, make no mistake about that, they want to create a situation of chaos so we don’t know which way is up and which way to turn. You are smarter than they are.”

Pro-Life Independent MP Derek Sloan, who is running in the Alberta riding of Banff-Airdrie in the 2021 federal election, spoke at the rally.

“We have to come to these rallies, we have to speak the truth to our friends, and we have to pray to God for deliverance in this country. We are under assault and under attack,” Sloan said.

“When the country becomes lawless, the citizens must stand up.”

Sloan spoke at the rally holding a sign containing Canada’s Charter of Rights and Freedoms.

“This charter has been completely ignored the last two years. Our entire governmental system, our court system, has been complicit in what we’re seeing,” Sloan said.

As for Bernier, toward the end of this speech, he called out “establishment politicians,” saying they “cannot” be trusted.

“We are saying no to fear and yes to freedom,” Bernier added.

An aerial view of the anti-jab freedom march shows just how large the crowd size was for the march portion of the event. Video revealed people packing a busy Calgary downtown area street for more than a kilometer.

Calgary’s freedom protest was the second in a week. Last Saturday, more than 2,000 people joined hands in protest to show their solidarity for nurses, doctors, and other frontline workers who are opposed to COVID-19 jab mandates.

Alberta Premier Jason Kenney recently launched a COVID vaccine passport in the province, despite earlier saying he would not do so.

The new rules ban “unvaccinated” people from gathering in their private homes and put new rules in place to only allow the vaccinated to dine indoors, attend concerts, and visit recreational facilities.

The province’s health authority, Alberta Health Services (AHS), announced that all staff and contractors must be fully vaccinated by October 31.

The city of Calgary has mandated jabs for all city employees. The city of Edmonton today announced that it is mandating COVID jabs.

Thousands of healthcare workers in Alberta, including nearly 200 doctors and more than 1,000 nurses, have vowed to fight government COVID-19 injection mandates, however.

Today, Canadians coast to coast headed to the polls to elect a new federal government.

The PPC is the only federal party against vaccine passports and injection mandates.

A Canadian pro-life group’s voter guide endorses 132 pro-life candidates in 115 ridings who are running in the 2021 federal election on Monday.