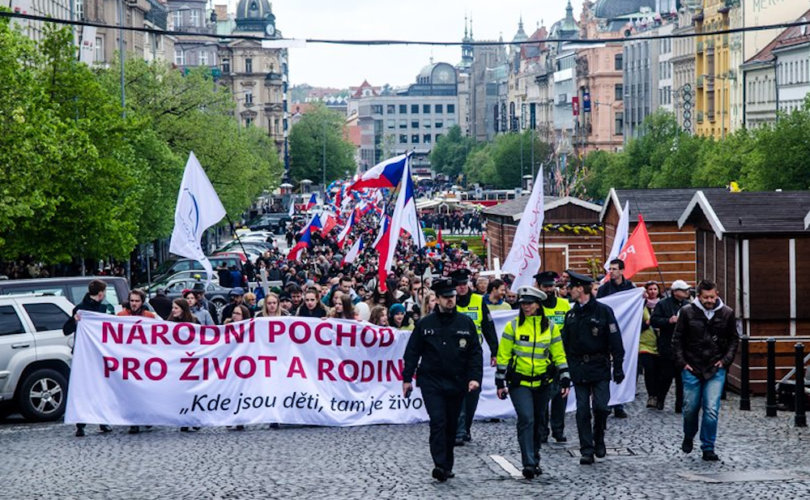 The 2017 March for Life and Family in Prague, Czech Republic, attracted a larger crowd than in past years.

PRAGUE, Czech Republic, April 24, 2017 (LifeSiteNews) – A record crowd of 5,000 that included at least one Catholic cardinal and other prelates participated Saturday at the 17th National March for Life and Family.

“Children Bring Hope” and “Scrap the abortion law” were among the banners carried the marchers who processed through the streets of the Czech Republic capital.

The March had the support of political, religious and public figures, Prague Morning reported, along with several Czech and foreign organizations.

Cardinal Dominik Duka, the archbishop of Prague, marched with pro-life supporters after celebrating Mass at St. Vitus Cathedral at Prague Castle to kick off the event. Cardinal Duka is also a sponsor of the event, according to the Hnuti pro zivot CR (Pro-Life Movement Czech Republic), which organized the March.

“Today I attended the holy Mass and the March for Life and Family. We have officially been referred to 5-6000, or more, we've managed to fill the Wenceslas Square. But, most importantly, we marched for something, not just ‘against’ something, as is usual for us. We want to be not only in opposition, but occupy a position and can encourage for good, not just to criticize.” (Translated)

The movement’s director lamented the more than 20,000 children lost to abortion in the Czech Republic each year, along with the fact that the only state-offered social service to couples facing an unexpected pregnancy is the killing of an unborn child.

“Today's assembly, which we are launching before God, is not primarily a demonstration of abortion, it is a march for life,” Zdeněk Rybová said in a statement at the end of the Mass. “It is the expression of consent to the created order, it is a march in which centuries of Christian civilization go along with us.”

“What is normal today is always not normal and certainly not always,” she said. “Suicidal cultures that despise conceived life and disparage family cannot last long.”

Some pro-abortion protesters counter-demonstrated.With police out in force for traffic control and to prevent clashes, no incidents were reported.

For video of the National March for Life and Family, click HERE.