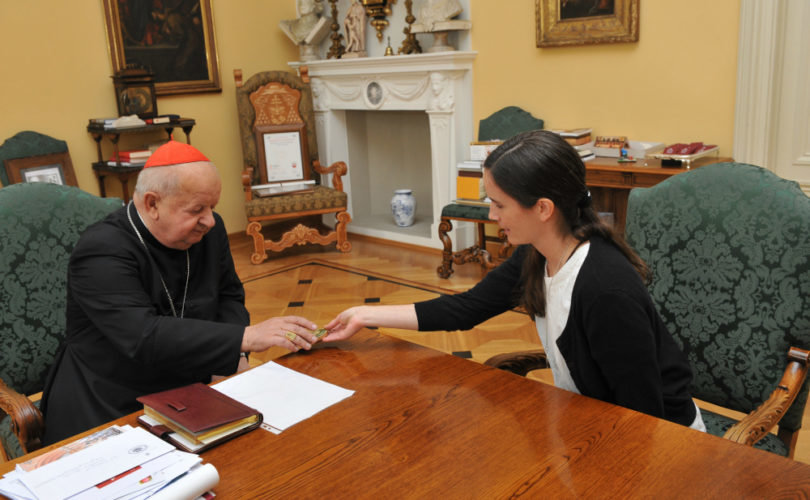 Wagner is known for entering abortion clinics to save unborn babies and to prevent their mothers from making a terrible mistake. This prisoner of conscience had already spent two years in a Canadian jail.

Bishop Tomasik also addressed the controversial French weekly Charlie Hebdo, whose editorial staff was victim of a terrorist attack. The French paper is infamous for its obscene and aggressive attacks on religion and religious figures such as Jesus, the Pope and Mohammed, among others.

Following the attack on the far-left weekly, Bishop Tomasik expressed the need for a deeper discussion on the limits of freedom, and respect for other religions in the media.

During his appearance on the Catholic station Radio Plus Radom, Bishop Tomasik said Wagner’s “voice is a sign of freedom” and stressed that she has expressed her convictions peacefully, not harming anyone.

Commenting on Wagner’s arrest, Archbishop Henryk Hoser of the Warszawa-Praga diocese told LifeSiteNews that he expresses “full solidarity with Wagner.” The archbishop, a trained physician and Pallotine missionary who served in Rwanda, offered “the assurance that he prays for her and her work.”

Such support for Wagner is not surprising in Poland. During her October stay, she met many representatives of the Catholic hierarchy, including numerous bishops and archbishops. She even had a special meeting at the residency of Cardinal Stanisław Dziwisz in Cracow.

Mary spent an hour in the cardinal’s private chapel, where St. John Paul II had also prayed, and then met with the cardinal. They discussed how the Kingdom of God could be built through pro-life work. When he asked her about the Canadian reaction to abortion, her answer was: apathy.

In the Polish capital, she met Archbishop Hoser for dinner at his residence and for a showing of “Not about Mary,” a documentary about Wagner. The archbishop welcomed Wagner and her Polish pro-life friends, who also have faced legal challenges because of their work. The archbishop said: “We are seeing people who stand up for life and have paid for it. They are on the front line of living Christianity. They are the true disciples of Christ.”

Archbishop Wacław Depo of Częstochowa, home of the Black Madonna and host to 4 million yearly visitors, regretted only speaking to Wagner for a short time for breakfast, so made sure to meet her again that day in the Jasna Góra Monastery. There a special English-language Mass was celebrated for Wagner and broadcast on the Internet. Wagner stood at the feet of the Black Madonna, while several politicians and dignitaries stood behind, not in front of, the Canadian visitor. Wagner was also given a private two-hour tour of Poland’s most famous monastery.

Additionally, Wagner spoke many times to Polish religious sisters and brothers, her modest and prayerful presence making an unforgettable impression. Entire seminaries came to see her. Some asked her to pray for their intentions.

In the northwestern town of Szczecin, 15 priests concelebrated Mass with an hour-long adoration of the Blessed Sacrament. The meeting with Wagner plus the Mass took three hours, but the church remained packed. The priests had prepared the town well for this special guest, making billboards of handcuffed hands holding baby shoes.

The Polish Catholic hierarchy from top to bottom has nothing but praise for Wagner. They mention her during homilies, and their parish websites encourage people to write to her in prison. Many Catholic magazines have put her picture on the cover. Polish Catholics may not know who the Canadian prime minister is, but they do know Mary Wagner.

Unfortunately, this contrasts starkly with her reception in the Catholic Church in Canada, Wagner’s home country. As her mother, Jane Wagner, wrote in an open letter to the Polish people: “Mary spent three months at home with us, which was such a gift. But not once was she asked to speak at our Church or at any parish on Vancouver Island.”

In fact, Mary Wagner had to travel across the Atlantic to meet one bishop in the Canadian Church. In the small southeastern town of Łańcut, she met the retired Bishop of Hamilton, Matthew Ustrzycki, an 82-year-old Canadian of Polish descent.