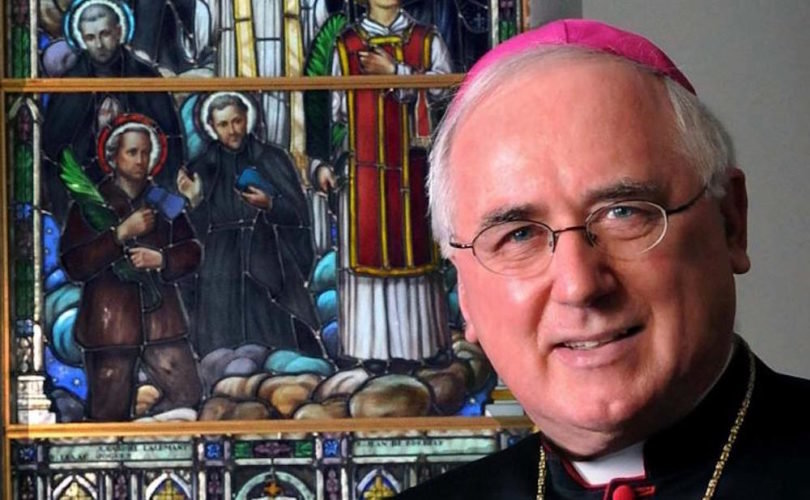 OTTAWA, March 4, 2016 (LifeSiteNews) — Pointing out that Catholics have a “special role to play in resisting the culture of death,” Ottawa’s Archbishop Terrence Prendergast has exhorted them to “fast and pray that our parliamentarians heed our concerns” about the impending legalization of euthanasia and assisted suicide in Canada.

“Take courage. Do not be afraid to stand up for the value and dignity of life,” wrote Prendergast in a pastoral letter to be read at the March 5 and 6 Masses in the archdiocese’s 107 parishes.

And he asked Catholics specifically to “please take part in a Novena to St. Joseph from March 10–18.” Catholics honour St. Joseph, among his many titles, as Canada’s patron saint.

With the release of his strongly worded letter, Prendergast joins his brother bishops who collectively have condemned as “completely unacceptable” the recent special joint committee’s report on euthanasia and assisted suicide, which will be legalized on June 6 following the Supreme Court’s February 2015 Carter ruling striking down the current law as unconstitutional.

“From not only a Catholic perspective but any rational perspective, the intentional, willful act of killing oneself or another human being is clearly morally wrong,” wrote Prendergast.

The Liberal-dominated special committee was tasked with providing the federal government a framework for new legislation governing euthanasia and assisted suicide, but its 21 recommendations, tabled in Parliament February 25, have been criticized as proposing a wide-open euthanasia regime that goes far beyond the scope of the Carter ruling.

The report, from which the committee’s four Conservative MP members dissented, recommends euthanasia for children, for psychological suffering alone, and endorses advance directives for people with degenerative diseases such as dementia. It also recommends that objecting physicians be forced to give effective referrals, and that publicly funded institutions be forced to kill patients by legally sanctioned medical means.

The Supreme Court’s ruling has “redefined medical ethics,” pointed out Prendergast, and as a result, society will “abandon people at their most vulnerable stage, rather than provide proper medical care for their suffering and need.”

The Catechism of the Catholic Church “explicitly teaches us, ‘whatever its motives and means, direct euthanasia consists in putting an end to the lives of handicapped, sick, or dying persons. It is morally unacceptable’ (n. 2277),” the archbishop wrote.

But the right to life “is not a matter for Christians only,” he noted. “It is a human right for all.”

“To formally cooperate in the killing of the disabled, frail, sick, or suffering, even if motivated by a misplaced compassion, requires a prior judgement that such lives do not have value and are not worth living,” he observed.

“But all human life has value. The law should protect all life. No one forfeits the right to life because of illness or disability.”

The Church “teaches that patients in the final phase of terminal illness may receive whatever pain relief is required, even if, indirectly, it could shorten their life,” Prendergast noted.

“The principle involved here is simple and clear: the goal of the medication is to ease the patient’s great pain, not to hasten their death.”

Nor does the Catholic Church “advocate prolonging life at any cost.”

“Rather, the Church is guided by the principle of the quality of life that considers the whole person and not simply keeping the body going no matter what,” Prendergast stated.

“As rational Catholic Christians, we ask the question in evaluating whether or not to accept life-prolonging treatment: is there a reasonable hope of benefit without excessive pain, expense, or other serious problem?”

The archbishop urged every Catholic to be “an agent of mercy” and to take action “in resisting this culture of death.”

That includes contacting MPs and MPPs, starting or joining pro-life groups, and talking to co-workers, associates, friends and family about “the importance of reverencing human life that begins at conception in the womb and ends in natural death.”

“I call on all Catholics to be strong supporters and proponents of the Gospel of Life,” Pendergast exhorted. “Make your voice heard.”

Toronto’s Cardinal Thomas Collins likewise issued a pastoral letter to be read at March 5 and 6 Masses throughout his archdiocese. He, the Canadian Conference of Catholic Bishops, the six Alberta bishops and Vancouver’s Archbishop J. Michael Miller have all issued denunciations of the committee’s report and the impending legalization of state-sponsored killing of vulnerable Canadians.