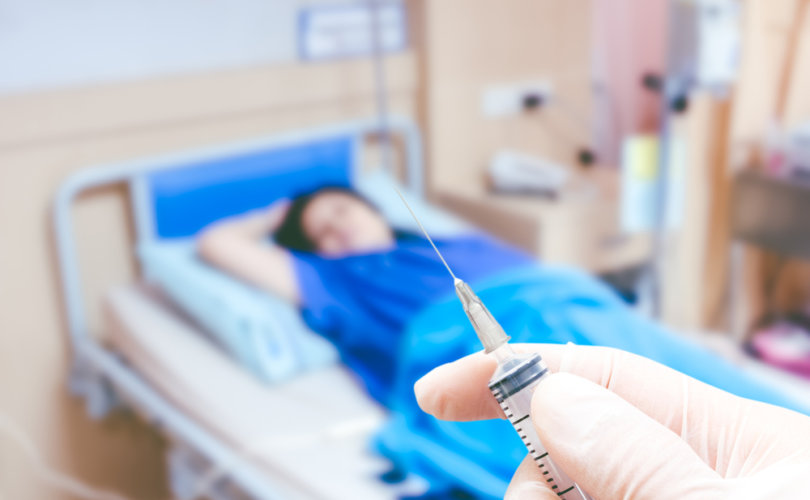 UPDATE: Change.org has removed the petition to save Kiano’s life. Readers are asked to find another petition on CitizenGo.

CALEDON, Ontario (LifeSiteNews) — A Canadian mother is desperate to save her diabetic, newly visually impaired, 23-year-old son from euthanasia.

Margaret Marsilla of Caledon, Ontario, a town northwest of Toronto, released a Change.org petition*earlier this month in the hope that it will prevent her 23-year-old son Kiano V. from dying at the MAiD (Medical Assistance in Dying) House in Toronto on September 28.

Kiano – whose surname is known to LifeSiteNews – was diagnosed with diabetes when he was four, which led to his visual impairment and an operation to recover the sight in one eye. This left him, Marsilla said in a Facebook remark, “exhausted,” both physically and mentally. Kiano sought therapy, but, unfortunately, he found a quicker, more permanent solution to his challenges.

“He decided to apply for MAiD …. and to our surprise, he got approved for it,” Marsilla wrote in an early draft of her petition. “Can you believe it? The doctor literally has given him the gun to kill himself.”

The mother, the director of a private nursing agency, is furious that her son was not encouraged to choose life, or offered treatment for depression, or counseled that it will take time for him to become accustomed to his sight loss, and that his family was not brought into the discussion.

“None of this happened,” she reported. “Just an application [for MAiD process] that lasted for 90 days and then his approval from [the doctor] and MAiD House! There was no attempt to connect with family members, no assistance to get proper help or medication for this young man, just an approval … to grant him with the gun to kill himself on September 28!”

Marsilla says that she needs to stop her son from being euthanized so that it does not become a “precedent case” for other young people living with diabetes or other managed diseases or mental illnesses.

She added, “To worsen matters, as of March, 2023, Bill C-7 allows people suffering solely from mental illnesses the right to seek medical assistance in dying. I cannot imagine that the legislators, contemplated the extent of this overreaching piece of legislation that legalized suicide and killing!”

“I need your help to make our voices heard,” Marsilla wrote. “Please sign the attached petition to stop these awful doctors from giving our children the ammunition they need to kill themselves.”

The text of the petition has been changed. The current version of the plea includes the mother’s support for MAiD for older people who are terminally ill:

I understand the need to seek this sort of assistance in dire situations where a patient has undergone significant
evaluation to determine eligibility, and where their natural death is reasonably foreseeable, given frailties, advanced age, and a state of decline in their health. However, my family and I are struggling to understand how and why this would apply to youthful person that is otherwise generally healthy, and where his death is not reasonably foreseeable.

As such, I feel the need to bring this to the nation’s attention as we do not want to see this procedure happen to our son, nor do we want it to set a precedent for others in the future. We protest the abhorrent medical practice of MAiD for youth dealing with a mental health crisis or other non-terminal illnesses or disabilities.

Marsilla also wrote cri-de-cœur on a Facebook diabetes support group page in which she added the information that her son had, as a teenager, a habit of smoking marijuana, which she believes altered his brain.

— Article continues below Petition —
PETITION: Demand the Conservative Party apologize for not resisting Trudeau's COVID regime
Show Petition Text
3875 have signed the petition.
Let's get to 4000!
Thank you for signing this petition!
Add your signature:
Show Petition Text

However, Kiano contests his mother’s version of events. In a message he left on the same social media page, he said that he was ashamed of the publicity and claimed that she had left out “a lot of the details.”

On September 23, as Marsilla’s petition gathered steam, Kiano, under the name “Kiano Vaf” began to publish garbled text messages sent between himself and his distraught parent. In them, he blames his mother for adding to his suffering, for withholding something he believes will alleviate it, and even for taking away his “right” to be euthanized on September 28.

Kiano V. also participated in a peer-reviewed scientific research study that was published in November 2021. His contributions to the study include a remark that he was “excited” to see research make “real-life changes,” partly because being able to help diabetes research would inspire him to take better care of his health.

LifeSiteNews has reached out to Margaret Marsilla. After initially directing LifeSiteNews to a spokeswoman and a press release, she gave LifeSite and extensive interview on September 27, in which she underscored that she believes her son is mentally ill and that he was a patient at the Catholic St. Michael hospital when he requested euthanasia.

LifeSiteNews has also reached out to Kiano, one of the doctors who Marsilla who said is responsible for approving her son’s request to be killed, and Toronto’s MAiD House, but has not yet received replies.

Alex Schadenberg of the Euthanasia Prevention Coalition has been in communication with the family. He told LifeSiteNews, “This story [shows] how euthanasia represents and abandonment of people at their time of need. People who need care are instead being killed.”

LifeSiteNews encourages our readers to pray for Kiano to change his mind and for his life to be saved, and use the hashtag #SaveKiano to spread awareness about the need to pray for this young man – and to let Kiano know that life is worth living. LifeSiteNews also encourages readers to pray for an end to Canada’s brutal euthanasia/assisted suicide regime and educate themselves on the need to provide those who are suffering with compassionate care rather than death.