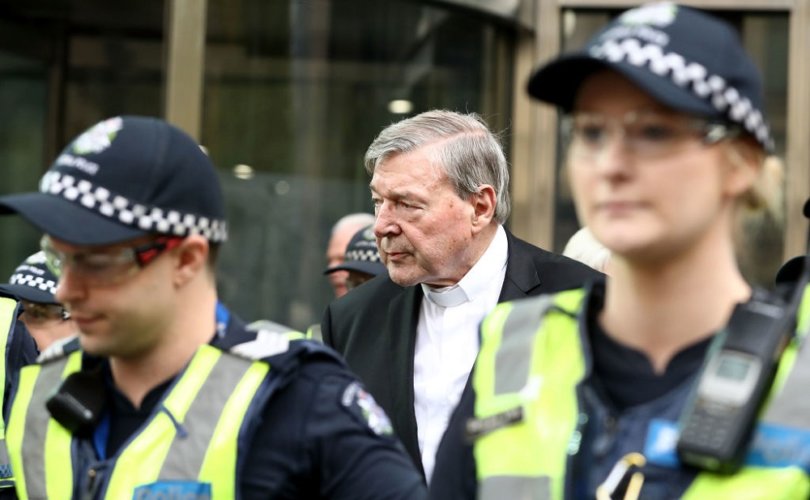 CANBERRA, Australia, March 3, 2020 (LifeSiteNews) — The High Court of Australia will hear the last appeal of Cardinal George Pell against his conviction on sex abuse charges on March 11.

Ahead of his last opportunity to convince the judges of the High Court of his innocence, which he has maintained throughout the trial, Catholics around the world are starting today to pray novenas for the former archbishop of Sydney.

Edward Pentin, Rome correspondent for the National Catholic Register, posted a novena “for the spiritual and temporal needs” of Cardinal Pell. The novena consists of a prayer to Our Lady, one to St. John Fisher, and another one to St. Thomas More.

Deacon Nick Donnelly, a former EWTN journalist, posted a different novena “for the release” of the cardinal. This prayer contains many short invocations to various saints, including St. Mary MacKillop, patroness of Australia, and St. John Paul II, who made Pell a cardinal in 2003.

Cardinal Pell was found guilty of two counts of child sex assault by a jury on December 11, 2018. Prior to his conviction, the jury had deliberated for only four days.

“A second planned trial was dropped in February 2019 due to a lack of evidence and because one of Pell’s principal accusers had died. In March 2019, Justice Peter Kidd sentenced Pell to six years in prison, with no chance of parole for three years and eight months,” LifeSiteNews reported.

After his conviction, Pell had applied for a hearing with the Court of Appeal in Melbourne, which eventually took place in June 2019.

“It was reported that Pell’s defense team had made a positive impression on the three judges. However, on August 20, the Court of Appeal upheld the conviction. It was a split decision, as Justice Mark Weinberg said he could not in good conscience refrain from dissenting,” the LifeSiteNews article continued.

Weinberg explained he was “quite unconvinced” by the evidence of the only person claiming to be a victim. He argued that it was not compelling enough to put aside all other factors suggesting that the alleged victim’s account was unreliable.

According to the complainant, Pell subjected him to sexual abuse on two occasions when he was a choirboy at St. Patrick’s Cathedral in Melbourne. At the time, in the late 1990s, the alleged victim would have been 12 and 13 years old.

Pell had first abused both him and another choirboy in the sacristy of the cathedral immediately following Sunday Mass, the alleged victim claimed. He said that on a separate occasion, Pell had groped him in the midst of a crowd of choirboys.

The second choirboy died of a heroin overdose in 2014. He told his mother that he had never been abused. His father later argued that the choirboy’s addiction to heroin “was linked to post-traumatic stress disorder caused years earlier when Pell sexually abused the boy as a 13-year-old,” according to SBS News.

A report published by the Australian Broadcasting Corporation quoted Justice Weinberg as saying “the complainant ‘seemed almost to clutch at straws’ when he was questioned to minimize inconsistencies in the evidence.”

“Having had regard to the whole of the evidence led at trial, and having deliberated long and hard over this matter,” Weinberg declared, “I find myself in the position of having a genuine doubt” about Pell’s guilt.

“My doubt is a doubt which the jury ought also to have had,” he added.

Various observers have criticized the Australian justice system for this trial.

Phil Lawler, the editor of Catholic World News, called the verdict “a shock and a black mark against the Australian justice system.”

He questioned the willingness of the Australian government to support a fair judgment.

“To say that Cardinal Pell is not guilty is to imply that the judicial system is guilty in its treatment of his case. Will the country’s top court have the courage to reach that verdict?”

George Weigel, author of a monumental biography of Pope John Paul II, pointed out “there has never been any ‘evidence’ that Cardinal Pell did what he was alleged to have done.”

Instead, there was “only the word of the complainant, and there was absolutely no corroboration of his charges — which, in the months since the cardinal’s trials, have been shown to be alarmingly similar to a fake set of charges leveled against a priest in a story published years ago in Rolling Stone.”

As prefect of the Vatican’s Secretariat for the Economy, the Australian cardinal “was openly loathed by many of the other curial leaders,” Ed Condon wrote in an analysis piece published by the Catholic News Agency.

“The Australian cardinal’s efforts to deliver financial transparency and accountability to the curia in the first years of the Francis pontificate met with internal curial resistance — in one famous incident, the Secretariat of State maneuvered without Pell’s knowledge to cancel an announced independent audit,” Condon continued.

“Since his return to Australia, Pell’s reforms have largely been reversed by those who would take the closest interest in his case in Rome.”

Some observers, including Robert Royal of The Catholic Thing, have speculated that there might be a connection between people in the Vatican trying to protect certain secrets and Cardinal Pell’s trial in Australia.