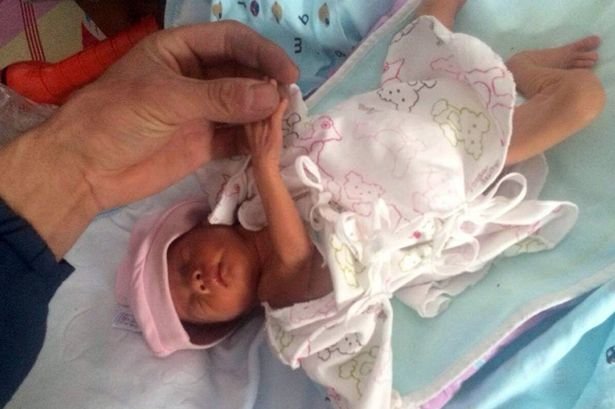 A baby girl in China has survived being born three months premature — and buried alive for two hours — after a doctor and concerned neighbors helped her parents get proper care.

The girl's mother, Li Xiaoyun was doing farm work when she began feeling sharp pain and gave birth to her child on the spot. Her husband, He Yong, immediately rushed back from work to find Xiaoyun in a pool of blood, with the seemingly dead child next to her.

What happened next was nearly a disaster for the poor family.

When an ambulance showed up to take Xiaoyun to the hospital, EMTs asked to see the baby. Yong told them that he thought that their child had been miscarried, four months into Xiaoyun's pregnancy. Xiaoyun was immediately whisked to the hospital.

It was there that a doctor informed the family that not only should the baby have been checked for signs of life, but that Xiaoyun may not have actually miscarried the baby.

Yong immediately rushed home to find that the baby's grandmother, also assuming that the child had died, had buried her. Seeing she was still breathing, Yong also took her to the hospital.

The doctor said the child was actually six months' along, which meant that Yong saved her life. Unfortunately, the ordeal was not over for the family, as after three days they ran out of money and had to discharge the child.

“My mother-in-law has chronic diseases, and I also have a 7-year-old daughter. My wife doesn't have a job. I am the only one who works,” Yong was quoted as saying by The Mirror.

Donations from well-wishers allowed the baby to return to the hospital, and she is being kept in an incubator.