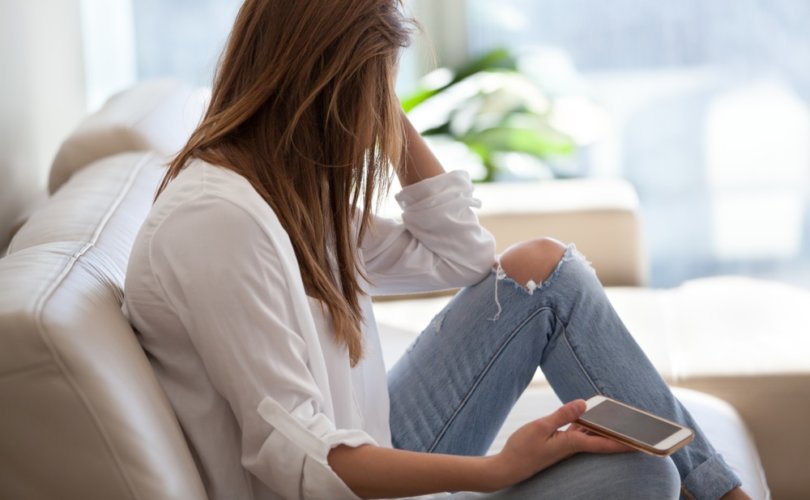 BALLARAT, Australia, September 3, 2020 (LifeSiteNews) — A pregnant woman in Australia who was arrested in her own home for the “crime” of promoting an anti-lockdown event has said she was “standing up for human rights” but that she is now too afraid to publicly protest the lockdowns.

Zoe Buhler, whose arrest in front of her two children has been watched by millions online, was interviewed by Australian media following her release from police custody.

Asked if she would still go on protest if she could, Buhler replied, “No, I’m too scared now and it's fear-mongering, that's how I feel.”

Buhler’s arrest has gained worldwide attention, attracting criticism from across Australia and around the world.

Sky News host Alan Jones has said Buhler is “a victim of the inexcusable and unlimited powers given to the Victorian police.”

“You can only push people so far,” Jones said.

“The verbal and intimidatory behaviour towards a pregnant mother is a form of violence the like of which no Australian will tolerate,” Jones continued while calling for Victoria’s state premier, Daniel Andrews, to resign from his post.

“Victoria, you stand condemned in the eyes of the world,” Dean said.

“We supposedly live in a free society — I’m horrified by this.”

When asked by a journalist about the treatment of Buhler, compared with the thousands of Black Lives Matter protestors who gathered in Melbourne in June, Andrews said that it was a matter for Victoria Police.

Journo: Rules should be applied evenly. Why are we in a situation where 10,000 people were allowed to attend a protest without being penalised, and a woman’s been charged with incitement for allegedly posting something on Facebook.

Miranda Devine, an Australian journalist for the New York Post said the incident showed that “Australia has become a police state.”

Herald Sun journalist Rita Panahi used Twitter to ask how “a civilised country [could] fall so far so quickly that Victorian authorities can justify terrorising a pregnant woman in her own home over a Facebook post[.]”

How did a civilised country fall so far so quickly that Victorian authorities can justify terrorising a pregnant woman in her own home over a Facebook post?https://t.co/u75C72Autw

In a related post, Panahi pointed out that Victorian police declined to fine the thousands of people who took part in Black Lives Matter protests in Melbourne in June, which were contrary to the lockdown regulations.

“Victoria police declined to fine activists taking part in BLM march & pushed for private security guards to oversee hotel quarantine program…when it mattered most they were MIA,” she wrote.

James Morrow, opinion editor at Sydney-based newspaper The Daily Telegraph, also expressed his shock: “What the hell? Whatever you think of lockdown protests this is not on.”

What the hell? Whatever you think of lockdown protests this is not on. https://t.co/BJqh90RRI8

Australia politician Craig Kelly, M.P., a Liberal Federal member for Hughes in Sydney's South, has posted numerous times on his Facebook page condemning Buhler’s arrest and the lockdown regime that allowed it to occur.

“THIS IS NOT AUSTRALIA,” Kelly wrote.

“I cannot believe this. I weep for what is happening in my country. This is what you’d see expect in Nazi Germany, or scene that Orwell would write in this novel 1984,” he continued.

“Every politician that voted for laws that allows a pregnant mother to be hand-cuffed for a Facebook post (that criticises government policy) stands condemned for eternity. This madness must end. Covid is not the Spanish Flu — it’s about 1/100th of the danger.”

Kelly posted later in the day saying Buhler’s family had contacted him and informed him that “some of the most brilliant legal minds in Victoria” had offered to represent her ‘pro bono.’ Buhler’s case is due to be heard at Ballarat Magistrates Court January 25, 2021. Local media report that she is facing a $20,000 fine.

Bernie Finn M.P., member for the Western Metropolitan Region in the Parliament of Victoria, has described Buhler’s arrest as “intolerable and a total abuse of police power.”

Finn has called on the Victorian police minister to conduct an inquiry why the arrest occurred, saying in parliament that the incident is “beyond all comprehension.”

“This appalling piece of legislation received bipartisan support when it was passed in 2008, and now look at the effect of it,” he said.

Loiacono explained that the 2008 act allows the Chief Health Officer to authorize the police to exercise emergency powers or public health risk powers for the purpose of eliminating or reducing a serious risk to public health.

The Victorian lockdown regime, among a host of other draconian measures, now allows police to enter private homes without a warrant.

Last month, Victoria police chief commissioner Shane Patton was unapologetic as he explained that police had in some instances been smashing car windows due to people inside the cars not cooperating with police or following the newly imposed health guidelines.

Australian social and political commentator Bernard Gaynor told LifeSiteNews that Buhler’s arrest “should send shivers down the spine of every Australian.”

“We have now reached the point where police in Victoria kneel for ‘Black Lives Matter’ protests while arresting pregnant mothers for ‘Thought Crimes,’” Gaynor said.

“It is proof that law enforcement has been weaponized for political purposes and to silence all dissent. Daniel Andrews’ government is now verging on dictatorship, using fear and paranoia resulting from the coronavirus,” he continued.

“The truth is that more Australians under the age of 50 have died from shark attacks this year than from COVID-19. Yet this has not stopped the government from locking fit, healthy and young people up in their own homes.”

Catholic journalist Natasha Marsh told LifeSiteNews that “the image of the arrest of Zoe Buhler, standing diminutively in pyjamas, is simply the latest horror image for Melburnians.”

“But every day, I see a mini horror,” she said.

“Walking down what used to be one of Melbourne’s most beautiful shopping strips, it is now an empty series of ‘For Lease’ signs, punctuated here and there by a takeaway coffee shop. Zoe Buhler is high drama, but what about the mini-drama of the shop that sold exotic buttons, or the cheerful Italians who used to sell leather shoes? No viral video to celebrate them. They have been snuffed out — chewed up in the glacier of the COVID ‘crisis’ — and all in the name of 'our safety.'”

Marsh drew a connection between the imprisonment of Cardinal George Pell for over a year by the Victorian justice system, before his unanimous acquittal by the Australian High Court, and the current statewide confinement now experienced by all Victorian residents.

“Two years ago, Victorian Police were allowed to hound, tether and badger Cardinal Pell until his eventual false imprisonment, while the wider community said nothing. Evil left unchecked will fester, and so it seems a kind of poetic justice that the same State that put an innocent man in prison is now sharing his fate — we are all in solitary confinement, 23 hours of the day, with no access to Mass.”