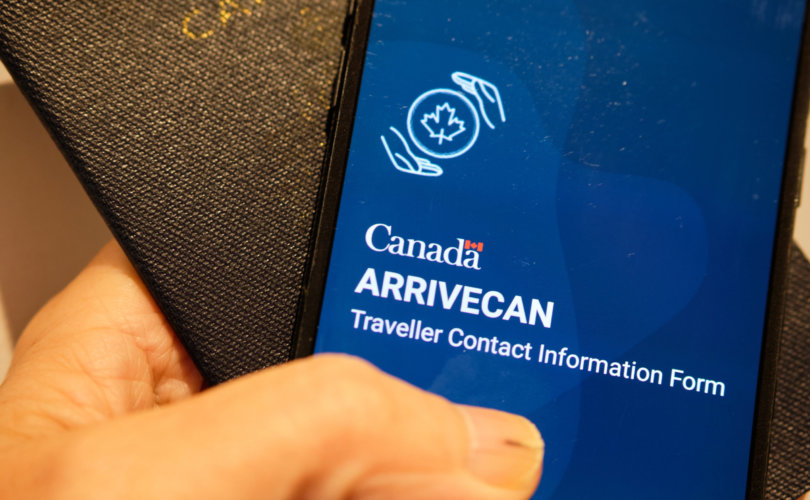 (LifeSiteNews) – A pregnant mother who went into early labour after a traumatic confrontation in one of Canada’s largest airports when she refused to use the Canadian federal government’s much-maligned ArriveCAN travel app blamed the loss of her baby boy on the app.

“ArriveCan killed my baby. 18 days ago my son was born prematurely due to an assault on me and my husband by Peel Region Police & PHAC at Pearson International Terminal 1 b/c I refused ArriveCan,” tweeted the mother Rachel, which is not her real name for privacy reasons, on September 5.

“The assault happened August 15th. Tonight we say good bye to our son. RIP we you.”

Rachel said that right after dealing with Peel Regional Police officers because she refused to fill out the ArriveCAN app after coming home from a trip to the United Kingdom with her husband, she went into early labor, but the baby did not make it.

She and her husband were told that they had to talk with Canada Border Services Agency (CBSA) personnel upon entering Canada at Toronto Pearson International Airport.

“I walked away with no ticket after Public Health said arresting me was not worth it. Released without charge or fine, but injured.”

On September 6, Rachel again put out a series of tweets, writing, “no one should ever have to go through what my family has gone through and will continue to go through in the coming weeks and months ahead.”

Rachel then thanked all of those for helping her get through her tragic loss.

“To everyone that has expressed their condolences about the loss of my child, I thank you and appreciate your support. I am not here to spread lies or mistruths. I have nothing to gain. I am fortunate in many ways that this is not about win-falls for me,” she tweeted.

ArriveCAN was launched in April 2020 by the Liberal government of Prime Minister Justin Trudeau and made mandatory in November 2020.

All travelers arriving in Canada must use the ArriveCAN app to submit their travel and contact information, as well as any COVID vaccination details, before crossing the border or boarding a flight.

In the fall of 2021, the Trudeau government banned the vaccine free from traveling by air, rail or sea both domestically and internationally.

While vaccine mandate was “suspended” on June 20, ArriveCAN remained.

Canada’s ArriveCAN app is now due to become “optional” at the end of the month, and most other COVID measures are expected to be dropped.

Top constitutional lawyers have said ArriveCAN violates one’s constitutional rights, adding that people’s civil liberties on paper have been rendered “meaningless effectively in the real world” because of COVID.

Rachel claimed, according to the Western Standard, that she was blocked by four Peel Regional police officers during her ordeal, with one telling her that “If you don’t want to give [the CBSA officer] your information, you can give it to me. It is required for public health.'”

It is at this point she noted she got into a very intense 10-minute argument with the officers, saying her “voice had become elevated and I was yelling that I needed to go, to stay away from me, and that I was pregnant.”

Rachel said that she had her “hands up to show that I wasn’t a threat.”

She noted that officers threatened her with arrest, at which point in time she started to read the first page of her Canadian passport, which states, a person should be allowed to “pass freely, without delay or hindrance, and to afford the bearer such assistance and protection as it may be necessary.”

Rachel relayed that an officer said those rights, only applied “before” COVID, even though a citizen’s rights have never been suspended to enter Canada.

She then fell on her back after backing up and hitting a barrier.

At this point, Rachel said she was “kicking and punching” to try and get officers off her, who she said were trying to get her passport.  She then said her hand was cut in the process.

Rachel said she could hear a CBSA officer tell the police that it was not “worth it” to try and restrain her.

Both Rachel and her husband were eventually let go with no fines and did not give away any of their information.

Rachel said that she began to bleed after returning to her home, located in Thornhill, Ontario. She went to the hospital, where she eventually had a C-section a few days later. Her baby boy, however, was born very prematurely and did not survive long.

Rachel and her husband have spoken to a lawyer regarding the incident and noted, “This is not about winning a lawsuit for us,” but about “ending something that should have ended an”d months and months ago.”

According to the report in the Western Standard over Rachel’s incident, Peel Regional Police claim Rachel’s allegations do not match what police body camera footage shows, saying  officers followed the law.

Many Canadians have been fined for not complying with ArriveCAN.