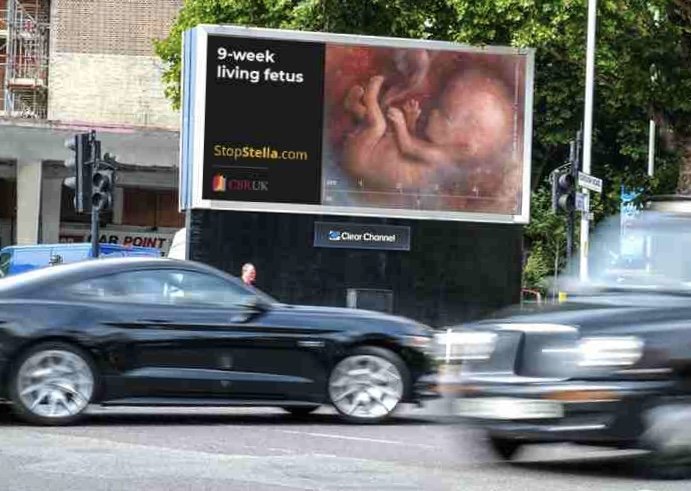 LONDON, October 1, 2019 (LifeSiteNews) — A member of Parliament who is leading the charge to legalize abortion in Northern Ireland has demanded that pro-life billboards popping up in the London suburb she represents be taken down.

The billboards picture a nine-week-old living fetus and which direct people to “StopStella.com,” are part of a campaign targeting MP Stella Creasy in Walthamstow, north of London, where she resides.

Creasy has called for the immediate removal of the billboards, which she claims are a form of “harassment.”

I would rather @CCUK_Direct took this advert down, the @metpoliceuk acted to stop the harassment and @patel4witham brought in buffer zone legislation to deal with these people in first place – but in the mean time seems Walthamstow has my back ..#lovewalthamstow #hatebullies pic.twitter.com/gRwrEG8jv1

Portraying the billboard posters as the “harassment of women” in Walthamstow, she asked the local police department if they still think this is just ‘free speech?’

Creasy asked her Twitter followers to put her in contact with the CEO of Clear Channel UK, the company which owns the billboards, and wondered, “how much did you get for this cr*p?”

Twitter-can you get me the CEO of @CCUK_Direct advertising? how much did you get for this crap? @metpoliceuk still think this is just 'free speech' and not harassment of women in walthamstow? Am sorry for the graphic images and @patel4witham am reaching out to you for help now. pic.twitter.com/rOG7Gc3App

Clear Channel UK Direct Marketing wasted no time in capitulating to Creasy’s demands, responding on Twitter:  “We apologise for a recent billboard campaign in Walthamstow. We have removed this campaign and are reviewing our internal processes.”

We apologise for a recent billboard campaign in Walthamstow. We have removed this campaign and are reviewing our internal processes.

Some of Creasy’s supporters didn’t wait for clear Channel to remove the billboards; they simply painted over them. One of the white-washed pro-life posters displayed a new hand-written message, “My body, my choice.”

Good morning Walthamstow, whoever did this I salute you.

Feel physically sick-tried to warn you @sajidjavid and @AmberRuddHR when you said powers in place to deal with this crap enough. Today the police said they wouldn’t use PSPO powers to move these people on. We also have recording saying targeting me explicitly for being pregnant. pic.twitter.com/KnrQ3fXBoA

The Pro-abortion MP has recently sought to railroad through an extreme new abortion regime in Northern Ireland without consulting the public.

The unfolding drama over the pro-life billboards is occurring just as 800 health care professionals have written to the UK secretary of state opposing the imposition of the radical new abortion regime on Northern Ireland.

The billboards are part of a larger effort by the Centre for Bio-Ethical Reform (CBRUK) to get Creasy to “stop promoting human rights abuses of children in the womb.”

“We are saturating Walthamstow, MP Stella Creasy’s constituency, with the humanity of the unborn child and the reality of abortion,” read a statement on the CBRUK’s website.

“Whilst highlighting to constituents how their MP is working hard to promote abortion as a ‘human right,’” it continued.

The CBRUK site noted that Creasy voted last year to decriminalize abortion up to birth across the United Kingdom.

The CBRUK website calls Creasy, who is pregnant, a “hypocrite” because of the  inconsistencies in ignoring the humanity of unborn children in order to support abortion, yet identifying her own child in utero as a “baby” and grieving the loss of a baby through miscarriage.

Stella Creasy deliberately conceals in all her public statements and dialogue on abortion – the humanity of the unborn child and what an abortion procedure actually entails.

Yet when she is speaking about her own baby in her womb, and her previous miscarriages, she speaks openly on their humanity.

Regarding her miscarriage, Creasy is quoted as saying, “I tried not to think about the fact my baby had died inside me” and “I can’t even protect my own child.”

The Centre for Bio-Ethical Reform is asking supporters to contact Creasy and demand that she “stop promoting human rights abuses of children in the womb.”