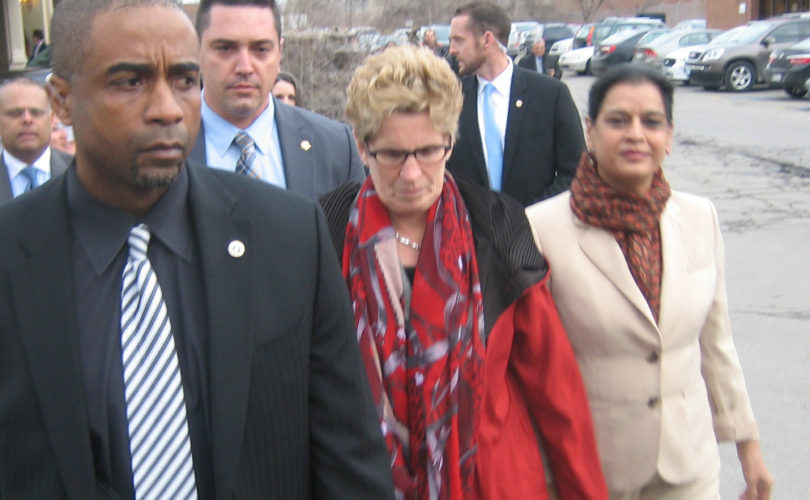 Premier Kathleen Wynne walks toward a crowd of 250 citizens protesting her explicit sex-ed program in Mississauga on March 26, 2015.Lou Iacobelli

TORONTO, April 15, 2015 (LifeSiteNews.com)  — Ontario Premier Kathleen Wynne, clearly still chagrined at the hostility she encountered at a monster Mississauga rally against her vaunted sex education scheme several weeks ago, has blamed the ongoing protests by parents on the federal Conservatives, saying they stem from “despicable” political motives that “we need to call them out on.”

But one of the chief organizers behind the grassroots opposition to Wynne’s cherished sex-ed curriculum is “calling out” Wynne herself, charging the Liberal leader with bullying—the very sort of thing the sex-ed plan is supposed to end—in schools, at least, but not, apparently, in premiers.

Wynne made the comments to the Toronto Star, which carried some of them on a short video on its website. According to the Star, Wynne believes “that such protests may be politically motivated — orchestrated by federal Conservative activists profiting from parents’ fears in order to boost their own partisan ambitions in a ‘despicable’ way.”

What’s more, Wynne thinks it will get worse as the federal election nears, with Conservative efforts focussing on a few crucial ridings. “I think it will be a ground campaign, and I think it will be an attempt to paint all Liberals [federal and provincial] with somehow . . . this very negative patina, and I just think it’s despicable,” she told the Star. “We need to call them out on it.”

But none of that is true at all, says Maggie Amin, a school teacher who has helped organize the growing opposition to the Liberal government’s sex ed plan, which would normalize marginal sexual proclivities in the minds of primary school pupils.

“Parents are used to being labelled by their own premier,” Amin told LifeSiteNews. “Although labelling is part of bullying – so she teaches us. We used to be ‘parents of faith,’ then we became ‘homophobes’ and now we are Conservatives!”

Amin noted that labeling and bullying are proscribed by Wynne’s sex education curriculum when they are targeted at groups the premier seeks to protect, but not when she is labeling parents.

“This has nothing to do with the Conservative Party,” said Amin. But “let me say, that from now on it will be a political issue. … Now, thousands of parents who were never politically involved are registering as voters to ensure that Liberals who announced that curriculum, and who are forcing it upon our children, will no longer be in power. They are chanting, ‘No more Liberals in my life.’”

Amin thinks blaming the Conservatives for the opposition is just silly. “Behind the rallies are parents from all walks of life; coming together, to oppose this curriculum which has rocked their world. They have signed petitions, sent letters to politicians, talked to school boards – and all met by a deaf ear.”

Not entirely deaf: The Star’s clip of the interview shows the premier promising loud and clear that “if at the end of the day, if you look at all that [in the curriculum] and you talk to the school, you can withdraw your children.”

Wynne and her education minister Liz Sandals have made this vow before, only to turn a blind eye as it was undermined by school districts that have just as adamantly insisted that parents could not opt their children out.

Teresa Pierre, the head of Parents As First Educators, affirmed Amin’s comments after returning home from the April 14 rally at Queen’s Park. “A quick scan of the crowd at today’s rally is enough to show how absurd this theory is. Many who attended were traditionally Liberal voters from the 905 belt of ridings at the edge of the Greater Toronto Area, such as Sikhs and Muslims. And not a federal Conservative in sight.”

Premier Wynne shouted down after surprising parents at sex-ed protest: ‘Resign! No more Liberals! We say no!’

Kathleen Wynne sneaks away from sex-ed protest as parents surround building; more protests on the way

5,000 parents rally in Toronto against sex-ed: ‘We will not co-parent with Kathleen Wynne’