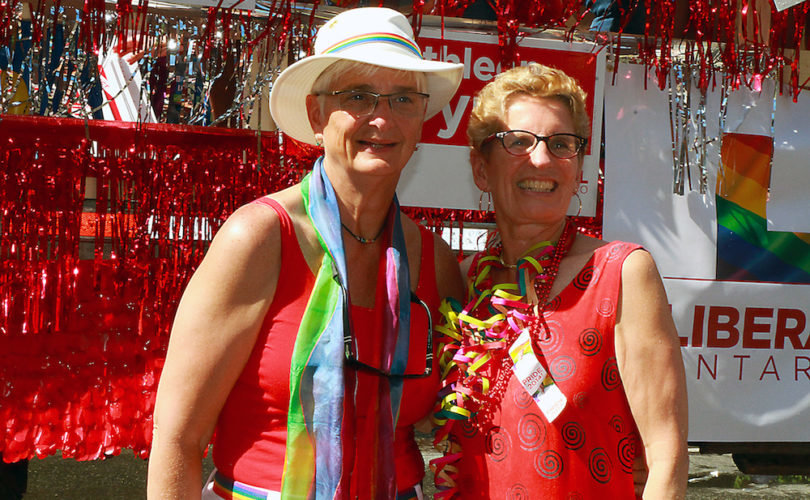 TORONTO, November 18, 2016 (LifeSiteNews) – Premier Kathleen Wynne says the fact that there are people who disagree with her radical social agenda “disturbs” her.

Wynne was ostensibly commenting to the Toronto Star on 19-year-old social conservative and devout Christian Sam Oosterhoff, who won Thursday’s byelection in Niagara-Glanbrook for the Progressive Conservative Party seat held by Tim Hudak until recently.

Though Oosterhoff, a Brock University political science student, has said little about his values other than the fact that his faith is central to them, that he is “100 percent pro-life” and that he is for parental rights, that apparently is bothersome for Ontario’s first Lesbian premier.

According to the Star, she told the paper before the byelection that “she was concerned that Oosterhoff’s views would undermine women’s rights and sex education in the modern era.”

Wynne said, “To the extent that there are people in our society, whether they are candidates or not, who believe that taking us back in time … that disturbs me.”

Jack Fonseca of the Campaign Life Coalition says everyone with socially conservative views, with traditional values, and all parents should find her comments just as disturbing. “It’s a sincere expression of her beliefs,” Fonseca told LifesiteNews. “But it’s also a calculated trial balloon.”

Fonseca believes Wynne is planning to banish from the public square all opponents of her radical sexual agenda and use the public schools to root it out of Ontarians at the youngest age they can be separated from their parents.

“She’s already doing it in her sex-education curriculum,” said Fonseca, who is one of the leaders of the resistance against the provincial sex-ed program and its promotion of homosexuality and gender fluidity.

Fonseca told LifeSiteNews that Wynne’s comment exemplifies the latest stage in political discourse, where forces advocating for the LGBT agenda insist that opposition should be silenced. “They want principled conservative beliefs and attitudes hunted down and eliminated from the public square,” he said.

“Wynne hates Christians and anyone with traditional principles, including Sikh and Muslim Canadians, the whole pro-life and pro-family movement — anyone who believes marriage is between a man and a woman,” Fonseca added.

But the pro-life campaigner hopes that Donald Trump’s election as U.S. president will embolden Canadian social conservatives. “Right now, people are terrified to speak, but maybe after Trump they will rise up and stop being afraid.”

Fonseca said Wynne’s comments will certainly embolden LGBT activists in government, schools, and the corporate sector to discriminate against Christians and others with the views the premier deplores.

Oosterhoff’s victory was interpreted by pundits as a backlash against Conservative Leader Patrick Brown, who has retreated from the socially conservative views that helped win him the leadership, especially during a recent byelection when letters with his name were sent out to voters condemning Wynne’s sex-ed program. As soon as these became public, he repudiated them, insisting he is now for the sex-ed program, a defender of LGBT rights and pro-choice.

Oosterhoff  has promised to“be a voice for common-sense, pro-family policies and concerns” and will “never waver in my support of parents as primary educators, and I will strive to ensure that parental rights are respected in education.”

He has never hidden his roots in the Christian Reformed farm community west of St. Catharines, saying ”My family and my neighbors and my faith have all been incredibly instrumental in shaping me into who I am today.” On YouTube, he promised to “give Niagara a strong, principled voice for family values.”

However, Brown insisted that Oosterhoff supports him in his endorsement of the new sex-education curriculum. “Sam has told me unequivocally that he is enthusiastic about the direction that I'm taking the party.”

But Tory insiders told the Toronto Star that Oosterhoff’s nomination was “the revenge of the so-cons.”