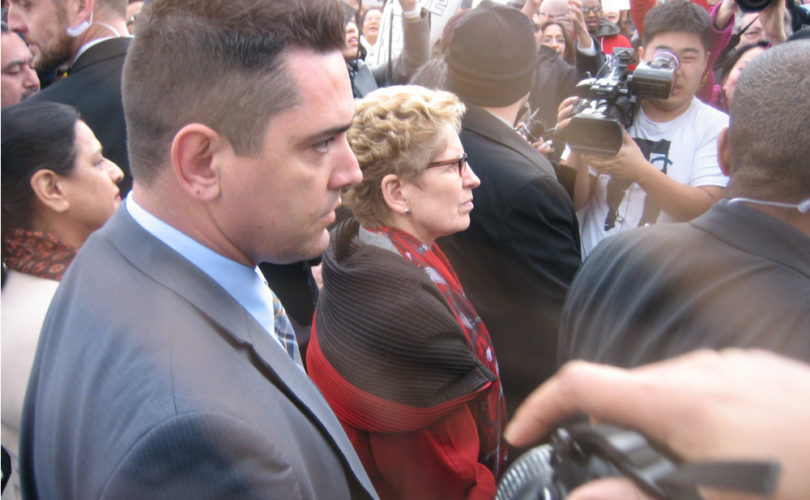 Ontario Premier Kathleen Wynne surprised parents by showing up to a protest of the sex-ed curriculum on March 26, 2015, but was shouted down as she tried to defend the program.Lou Iacobelli

MISSISSAUGA, Ontario, March 27, 2015 (LifeSiteNews.com) — Ontario Premier Kathleen Wynne tried to address an angry crowd of parents last night in Mississauga during a spontaneous ten-minute appearance at a protest rally against the Liberals radical sex-ed curriculum, to be rolled out September 2015, only to be shouted down with cries of “Resign!” “No more Liberals!” and “We say no!”

Wynne was repeatedly interrupted with shouts of “We say no!” and “No more Liberals!” by an estimated 250 sign-carrying parents, who then followed the premier as she retreated into the Verdi Hospitality Centre, where she was scheduled to host a tea with representatives of ethnic media. Wynne disappeared into the centre as parents cried “Shame on you! Shame on you!” and “Resign! Resign! Resign!”

At about 6:00 p.m. on March 26, Wynne, surrounded by a coterie of security men, emerged from the centre and strode toward the crowd, which had been gathering for nearly an hour. When news spread that the premier wanted to talk to them, people moved toward the building, blocking the driveway, chanting, “We say no! We say no! We say no!”

At that point, six Peel police officers motioned them back and cleared the roadway, as Wynne appeared, and took the microphone from Jotvinder Sodhi, president of the Mississauga-based HOWA Voice of Parents and organizer of the evening’s event, billed as a “silent demonstration.”

Sodhi had been invited inside four times to talk to Wynne, he told LifeSiteNews in a telephone interview, but he asked for a delegation of seven to represent the various communities, and was told there was only room for one. “Do they think we are stupid?” he asked, adding that it would have confused people if he had gone inside. “They’re going to think I bought out,” he said. “I would never do that in my life.”

“Guys, please, please,” Sodhi yelled. “Silence, please.” But Sodhi himself interrupted the premier after she told parents, “I hope you will get more information from your local MPPs office.” The HOWA Voice of Parents president responded, “Our local MPPs are good for nothing! They never come out in public! They are hiding in their chambers!”

Wynne persisted, telling the crowd: “I know that you are here because you care about your children,” the premier said. “I know you love your children and you want to protect your children. I want you to understand that I know that.”

The parents followed her up to the entrance of the Verdi Centre yelling “Shame on you!” and “Resign!”

“She has a fear of parents,” Sodhi told LifeSiteNews. “We are going to continue this all the time. We are coming to Toronto.” HOWA Voice of Parents plans to bring its concerns to the Toronto school board, and plans to attend the April 14 rally at Queen’s Park.

Sodhi is planning another protest in March as well. He says he’s never seen before such a groundswell of protest with “all citizens together. This is the first time this has happened.” His group, he emphasized, is not just for the Sikh or Punjabi community. “We are humans first, parents first. Race, culture comes after.” On Thursday, parents came from London, Kitchener, Ottawa, and Kingston, Sodhi said.

HOWA Voice of Parents protested the radical sex-ed curriculum at the Peel District School Board meeting two nights earlier, on March 24, where Sodhi told the board that parents had not been consulted about the sex-ed curriculum.