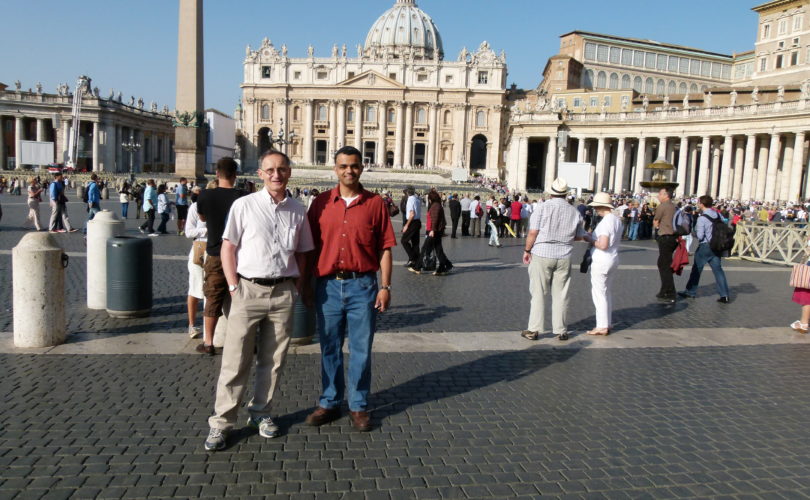 LifeSite co-founders Steve Jalsevac and John-Henry Westen during one if their Vatican City reporting stints.

LifeSite’s reporting on the recent Synod on the Family in the Vatican was our most intense Vatican project ever. (See photos below)

You may have read the numerous stories published as a result of our presence there, but we haven’t told you all that was involved and the resources required to produce those reports.

I hope that after reading, you will have a better understanding of just how hard we at LifeSite work for our readers, to bring you the Truth about the most important issues of our day. That’s why we need your support more than ever, to help us reach our Christmas Campaign goal of $250,000 before December 23rd.

Let me give you just a small taste of the back-story to this huge challenge for us:

Wherever we travel to report on special events, we give 110% to maximum use of the precious time and resources we have available. The goal is to get as much quality information, photos and video that we can for the best possible reports for our readers.

That involves much advance planning, logistics for transporting a large amount of computer, video and photo equipment, and purchasing international cell phone plans. We also contract for a Rome portable high speed Internet stick so that we have Internet access no matter where we are in Rome and at any time of the day or night, as there are frequent communications back and forth with home base editors.

LifeSite’s journey to Rome to cover the Synod on the Family began before the Synod itself with the formation and daily coordination of leaders from Voice of the Family (the group we co-founded with the Society for the Protection of Unborn Children in England).

Prepping for meetings with Synod Fathers, gathering intelligence from participants, and staying on top of developments culminated in five LifeSite reporters getting accredited with the Vatican Press Office to report from the Synod.

Two reporters – our intern Andrew Guernsey, who was studying in Rome, and England’s Matthew McCusker (on loan from SPUC) – were stationed in Rome for the entire duration of the Synod. Three other journalists each took 10-day shifts at the month-long affair since family duties prevented longer stays.

Patrick Craine, our Associate Editor and Canadian Bureau Chief, covered the first part of the Synod, I took the middle section, and U.S. reporter, Lisa Bourne, covered the concluding portion.

There were few hours left for personal time during the incredibly hectic and long Synod working days.

Just after reaching Rome in the early morning, each LSN reporter’s first stop from Rome’s Fiumicino airport was the Vatican press office to gather their press pass. Without that, we would not have been able to attend the press conferences and other official Synod events.

En route to the hotel, still dazed from the overnight journey, I quickly greeted the team before heading up to my room. My roommate was pro-life leader and volunteer from Quebec, Canada – Georges Busemi of Campagne Quebec-Vie.

Normally when we go to Rome, we stay for free in the apartment of a gracious LifeSite supporter, allowing us to significantly cut costs. That was our plan this time as well. However, unexpected last-minute complications made that impossible. While distressingly costly, like everything in Rome, our hotel rooms were sparsely furnished, with beds the size of cots rather than the ‘singles’ we’re used to in America.

Days began early as we arrived each morning at the basilica for the 7am Mass. We arrived at 6:30am to avoid the usual large rush of visitors. A breakfast meeting of the Voice of the Family team at our base of operations in Hotel Columbus followed, where new items and agendas were discussed amid strong coffee and nourishment.

At times, breakfast needed to be skipped in order to take in the photo opportunities of the Pope and Bishops entering the Synod Hall and commencing their day’s activities.

After breakfast, we went straight to the ‘office’ – a room with tables arranged in a circle where LifeSite reporters and SPUC members worked alongside volunteers from Canada, the USA and the UK.

At 8:30 a.m. the day was officially launched with the rosary for a good outcome to the Synod. This was followed immediately by an agenda-setting meeting detailing the day’s activities and the needed coordination.

It was usually there that the explosive material for reports and stories, photos and sound bite recordings were gathered. Uploading photos and video and audio recordings and writing reports began immediately at the end of the press conferences.

If we were lucky enough to be done the uploading within an hour we had time to catch a quick bite for lunch. At least there were some snacks in the office to keep us going when we did miss lunch.

At 3 pm. Rome time it’s the start of the day back home, so the LifeSite offices in America are humming and getting out the breaking news stories we’ve already compiled during the day. Meanwhile in Rome, reports continue as we read the coverage from other reporters of what’s happening in and around ‘town’ with many of the world’s top cardinals and bishops giving random interviews.

We met and coordinated with cardinals and bishops, theologians and life and family leaders to get reaction to some of the more alarming stuff coming out of the Synod. When these interviews are filmed, it becomes quite a task to get to your intended subject with equipment in tow because the time available before the person had to get back to the Synod was usually extremely tight. Seeing suited, equipment-laden reporters running through the streets was not uncommon.

Multiple events and press conferences, photo opportunities and interviews caused us to scatter to various parts of the Eternal City, but we usually returned in the late afternoon to regroup. Second and third reports of the day were submitted after 8pm since we’ve got a six-hour time lag back home.

By 8pm we were usually able to have dinner and the team frequently went out together to reminisce about the day’s adventures over much-needed food and drink.  Afterwards I often spent a few hours on the outside steps of the closed-down Vatican press office to use the high speed Internet Wi-Fi feed to upload large photo and video files.

Arriving back to the hotel to finish off those reports, and make those late night calls home to loved ones, closed the day with a touch of reality and refocusing of purpose.

Some days, each of our reporters literally worked 18-20 hours. Getting back to our rooms at what would be considered a reasonable time back home, was a rare occurrence.

It occurred to me several times that reporting on the Synod felt very much like being in a war zone where the focus of activity was the fight.  But the motivation for that fight is the home and the loved ones, who, far from being forgotten, are the impetus for continuing on.

All this just scratches the surface of what happened behind the scenes during our stint at the Synod. There are many more tales to tell, especially about all the personal interactions with persons of significance. But then, most of that was off-the-record.

Without your faithful and generous donations it would have been impossible to fly our team to these events and feed and house them and pay for their many equipment and other needs. Despite our efforts to keep costs to a minimum it still all added up – Rome is not an economical place to visit.

Still, I hope you would agree, the result of this effort and expense has been of great value. This is what is required all year round from one event and one story to another, and often from one country to another, as we strive to present you with the most informative, truthful and professional quality reporting on the precious issues that we cover.

This Christmas, I hope you will remember LifeSite as you make donations to organizations you believe are doing the important work necessary to rebuild our culture and fight for the things we hold most dear.

With your support, we will continue to commit everything we have to supporting life and family through our investigative journalism.

Whatever you can give, whether its $10, $25, $50, or $100 or more – every donation helps us to continue our mission and we are grateful for, and humbled by the support our readers give us year in and year out.

God bless you all!