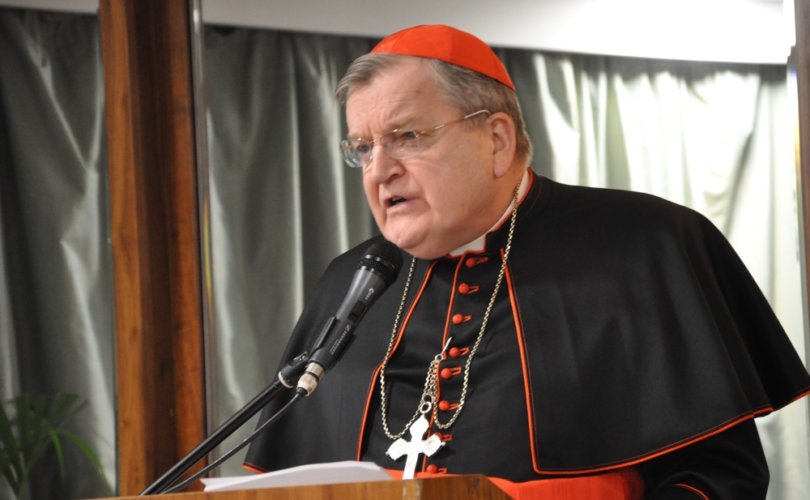 LACROSSE, Wisc. January 10, 2020 (LifeSiteNews) – Cardinal Raymond Burke said that the idea that there is a “new” magisterium of Pope Francis that requires a “new theology” that must “abandon all the old categories” to match it is “simply preposterous.”

In an era of confusion in the Church with regard to doctrine and discipline, Cardinal Burke said in a far-ranging interview published in The Wanderer Jan. 8 that Catholics should refer to the teachings that are contained in the official Catechism and the “official magisterial teaching of the Church.”

“People keep talking about the ‘Pope Francis magisterium.’ Recently, I talked to two young priests who conveyed a conversation they had with third young priest who was studying moral theology. He said to them: ‘We have Pope Francis’ magisterium that is completely new; we now have to abandon all the old categories and develop a new theology to match this magisterium.’ This is simply preposterous — this is not the magisterium! Priests and the lay faithful must understand this,” he said.

In the face of challenges to Church doctrine, Burke said that faithful priests and laity “must be prepared.”

“The only answer in the situation in which we find ourselves at present is to fall back on the constant teaching of the Church, which is contained in the Catechism of the Catholic Church and in the official magisterial teaching of the Church. That has to be our point of reference, he said.

He recalled that Pope Liberius excommunicated St. Athanasius in the 4th century in a political decision for the “sake of peace.” At the time, the Arian heresy denied the divinity of Jesus Christ but was nevertheless accepted by Byzantine rulers and numerous bishops. Burke said that St. Athanasius accepted the suffering inflicted upon him and “remained steadfast in fighting for the truth. That is precisely what needs to happen again today.”

Burke was asked to comment about papal nuncio Archbishop Christophe Pierre, who stated at the general assembly of the U.S. Conference of Catholic Bishops in November that the bishops should “reflect prayerfully” on their communion with Pope Francis and they should make better known his exhortation Amoris Laetitia, while taking “concrete actions” to make “his magisterium better known among our people.”

Regarding Amoris Laetitia, which he and three other cardinals questioned in five “dubia” or questions presented to the Pope in 2016, Burke said that he does not believe the Pope will ever issue an answer. Cardinals Carlo Caffarra, Walter Brandmüller, Joachim Meisner, and Burke publicized their dubia after the Pope did not provide an explanation about his exhortation. The questions required yes-or-no answers in order to dispel what the cardinals said were “uncertainty, confusion, and disorientation among many of the faithful” about Amoris Laetitia.

Among the concerns about Amoris Laetitia was whether it would allow adulterers to receive the Eucharist and whether an intrinsically evil act can be turned into a “‘subjectively’ good” act based on “circumstances or intentions.”

In the interview, Burke reiterated Church teaching, saying that if the Pope were to answer the five dubia, it would mean that “false pastoral interpretations of Amoris Laetitia could not go forward.” He said that adulterers should not present themselves for Holy Communion. Reaffirming Church doctrine, Burke said, “Our Lord’s teachings are clear: Marriage is indissoluble, faithful, and between one man and one woman.”

As for the “pastoral accompaniment” that is mentioned in Pope Francis’s exhortation Evangelii Gaudium, Burke said that “while the Church is always accompanying all her members and trying to assist them in leading holy lives,” he asked, “Where is this accompaniment going?”

Accompanying those in an “irregular matrimonial union,” he said, means helping them to not receive the sacraments “until they are able to rectify their situation, their canonical status.”

Burke disagreed with Bishop Robert McElroy of San Diego who told his fellow bishops in November that abortion is not the pre-eminent issue faced by Catholic social teaching. A majority vote by the bishops retained language in a letter that cited the importance of abortion over global warming as concerns. Burke said, “It is absolutely clear that abortion is the pre-eminent social issue. Abortion, from the very first days of the Church, has always been considered to be among the most grievous of sins.”

Applauding the bishops who voted to retain the language about abortion, he said, “Until we restore respect for human life, none of the teaching on the other social issues has any solid foundation.” He also said that it is an “ominous sign” that 69 bishops voted against naming abortion as a preeminent social issue.

When the interviewer Don Fier asked whether there was any discussion at the meeting about the large numbers of Catholics who have left the Church, or about the great majority who deny the Real Presence in the Holy Eucharist, Burke said that the two issues should have been at the top of the list for their meeting. Saying that the Church is becoming identified as “one more secular reality” instead of being a “sign of salvation and the light of the nations,” Burke said that there should be a re-dedication to “fundamental truths like the Real Presence.”

Applauding the example set by Archbishop Fulton Sheen, whose evangelical apostolate reached millions of people via television in the 1950s and 60s, Burke said that “people wanted to hear the truths of our faith that he taught.” Burke said that “we have become too politically correct, too concerned about pleasing people.” He said that people must be told the truth attractively, “but without ever compromising the full integrity of the truth.”

Regarding reception of Holy Communion by those living in manifest sin, Burke said he supported a bishop who stood by a priest of Grand Rapids, Michigan, who denied the Eucharist to a Catholic woman living openly in a lesbian “marriage.” Referring to comments that pro-LGBTQ Fr. James Martin SJ made about the debate, Burke said that it is clear that the Jesuit priest “does not teach the Catholic Faith in these matters and has no particular authority to make statements on this point of Church discipline.”

Alluding to whether or not Catholic politicians, such as former Vice President Joseph Biden, should be admitted to the Eucharist, Burke said that it is moral law rather than politics that is at stake. “The moral law applies to politicians as much as anyone else,” he said. He added, “How can bishops stay out of the matter, when politicians who profess to be Catholic are giving scandal to the whole nation by voting in favor of abortion?”

When Fier asked what is behind the “revolutionary element in the Church,” Burke identified the sin of pride. “It is a question of pride; it is a question of thinking we know better than the law of God, the Ten Commandments, and the Church’s unchanging magisterial teaching with regard to faith and morals,” he said. It is “pride in its most horrible manifestation,” he said, that seeks to “freely define the meaning of human life, to define marriage, to define human nature itself.”