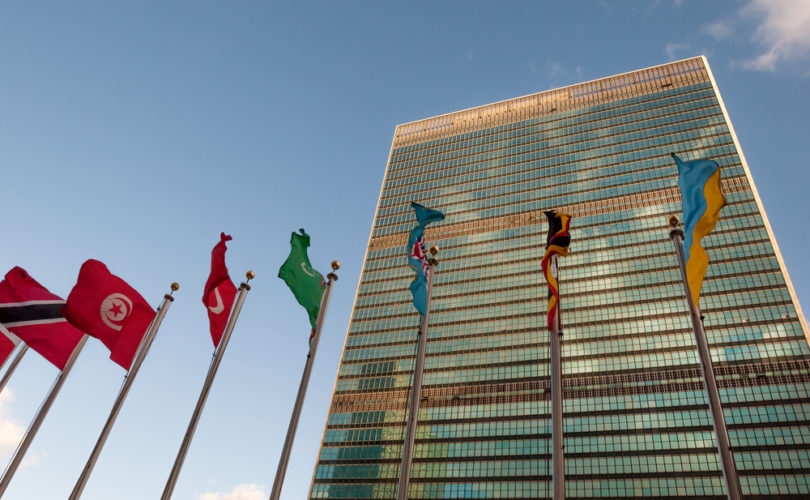 NEW YORK, March 8, 2016 (LifeSiteNews) — In a move that pro-family advocates have condemned as “preposterous” and “a particularly egregious episode of advocating for abortion,” a UN committee released a General Comment on Tuesday that falsely claims there is a right to abortion and that to deny women access to it is a type of torture.

That UN bureaucrats are disingenuously promoting abortion is “nothing new,” Stefano Gennarini of the Center for Family and Human Rights told LifeSiteNews in a telephone interview from New York.

But for the UN Committee on Economic, Social and Cultural Rights (UNCESCR) to release this General Comment on Sexual and Reproductive Health is “reprehensible,”  and “particularly egregious” because UN member countries blocked its publication six years ago, he explained.

And while General Comment 22 is “not dangerous” because it is neither binding nor authoritative, “what is dangerous is countries that have laws that protect the unborn not saying anything about it,” Gennarini said.

Pro-life nations “should not accept misinterpretations of international law like this.”

The UNCESCR “undertook to create this General Comment in 2010,” Gennarini said, but dropped it after two consultation sessions because of “vociferous opposition” by pro-life NGOs and pro-life member countries.

Patrick Buckley of the UK-based Society for the Protection of Unborn Children (SPUC), was among the lobbyists vociferously opposing the General Comment in 2010, and the objections remain valid, he told LifeSiteNews in an email from Geneva.

General Comment 22, which was released March 8, “presumably to coincide with International Women’s Day,” makes the “preposterous claims that abortion is part of the right to health and denial of abortion is a form of torture.”

But the binding treaty — or International Covenant on Economic, Social and Cultural Rights (ICESCR) — that the eponymous committee monitors “makes no mention of sexual and reproductive health,” noted Buckley.

Indeed, “there is no right to abortion in this or any UN treaty,” he emphasized.

General Comment 22 promotes a “false impression” that “an international consensus exists which recognizes access to abortion as a human right,” he stated, but “no such right has been recognized in any human rights treaty.”

In fact, it’s the opposite.

“The right to life of all members of the human family, regardless of birth or any other status, is a founding principle of the UN.”

He also stressed that General Comment 22 on sexual and reproductive rights is “neither binding or authoritative,” and that UN committees “have no authority whatsoever.”

But the “problem is that there’s an international abortion lobby” that includes International Planned Parenthood and the Center for Reproductive Rights, “and a bunch of other extraordinarily well-funded organizations,” he said, which “prop up the opinions of these supposedly independent experts in Geneva, and present them as the final word on the interpretation of treaties.”

Gennarini sees the influence of the Office of the High Commissioner for Human Rights (OHCHR) bureaucrats behind the Committee’s release of this “disingenuous” General Comment.

What makes it “abundantly clear that the OHCHR is exploiting the current political situation” is that, with the release of the UNCESCR's General Comment 22, both committees that monitor the two treaties are now claiming that access to abortion is a human right, Gennarini said.

“The Human Rights Committee, which is the UN committee body that deals with other treaty, the civil and political rights treaty, is also elaborating a comment on the right to life in which they say that abortion is a human right.”

“It appears that there is a UN wide coordinated strategy targeting the unborn,” agrees Buckley.

Gennarini contends that the General Comment 22 was released now because of a “favourable political situation,” which includes “left-wing governments” in traditionally pro-life Chile and Malta and that “diplomats at the UN from these countries are not cooperating with pro-life groups on these issues.”

He reiterated that it’s essential pro-life countries fight this most recent and “egregious” tactic by UN bureaucrats who “want to impose abortion into international life,”  and “don’t want countries to have a say about it.”