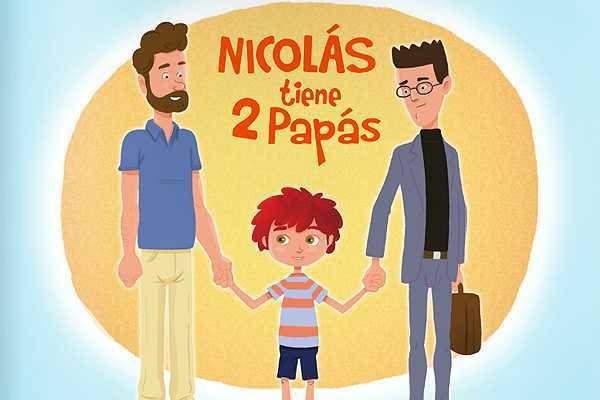 Nicolás lives with his dad, Sebastián…and his other dad, Pablo. This is the premise of the pamphlet funded by the European Union that the Movement for Homosexual Liberation and Integration (MOVILH) will distribute among 500 kindergartens in Chile under the auspices of the National Preschools Council (JUNJI).

JUNJI’s preschools are state-run institutions that depend on the Ministry of Education and care for children from low income families, who generally cannot afford to go to a private institution.

The pamphlet's partisans say they deliberately target the youngest minors to overcome their parents' moral objections to homosexuality.

“Most of the discrimination cases we have in public and private school systems come from adults,” said Rolando Jimenez, MOVILH’s president. “Therefore, to give this material to preschool teachers will provoke an important cultural change about these subjects.”

Jimenez said in a TV interview that the goal of Nicolás Has Two Dads “is that children, from their most tender years… are ‘vaccinated’ against bigotry, homophobia, segregation…that they learn since they are little that there are different ways to be a family, to be in a relationship, that there are various sexual orientations and all are legitimate.”

Although the government announced that the book is not a mandatory reading and that parents will be asked before handing it out or reading it to children as young as four, no safeguards or protocols are being put in place to ensure the parent’s rights to object will be respected.

The book, deemed “the first Chilean tale for children about sexual diversity and homoparental families,” financed by the European Union and the Embassy of Holland in Chile, will be distributed with the sponsorship of Chile’s Child Services (SENAME), the Directorate of Libraries, Archives and Museums, among other government agencies, prioritizing kindergartens, educational institutions that start from preschool, libraries, and preschool teachers.

The launch of the book has caused a storm of reactions; senators, congressmen, religious leaders, NGOs, town councilors, have protested and publicly declared their outrage. Iván Moreira, senator for the opposition Independent Democratic Union Party, went so far as to say “with the signals this government is sending, we are only short of having the Bible forbidden because it is ‘homophobic.’”

A CitizenGo campaign has been launched to complain to Holland’s Ambassador in Chile and the EU’s delegate for this “ideological interference” and “to ask for withdrawal of your funding of a project that gravely attacks parental authority and the protection of infancy.” More than 11,000 signatures have been collected so far.

Evangelical Christians have been vocal in their opposition to the book and have announced public demonstrations in Chile’s capital, Santiago, and other major cities throughout the country. Evangelical Bishop Emiliano Soto declared the book “abuses the mind of a child.” Bishop Juan Carlos Reyes agreed, “They are imposing a form of thinking on children who are used to having the image of a mother and father…This is an educational dictatorship.”

The Catholic bishops of Chile have not issued an official statement.