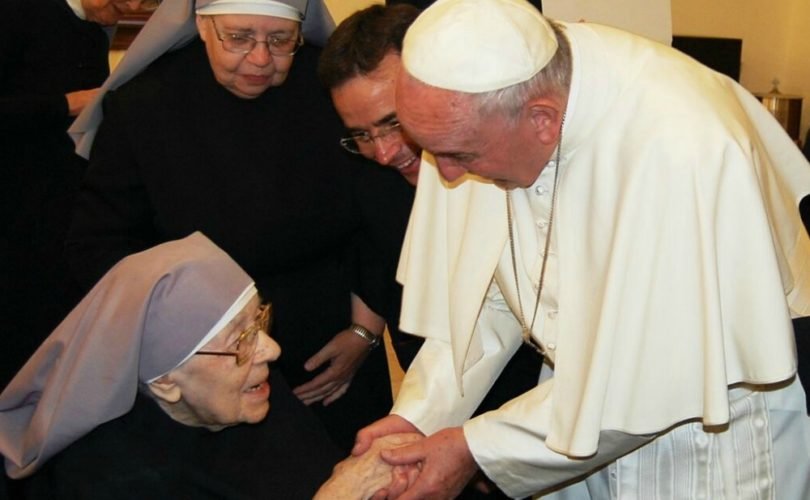 WASHINGTON, D.C., September 29, 2015 (LifeSiteNews) – The First Amendment's free exercise of religion is not so primary as to allow Christians to refuse to take part in sacrilegious acts, according to President Obama.

Speaking at a Democratic National Committee LGBTQ fundraising gala on Sunday, Obama said freedom of religion does not override the newly christened constitutional right to homosexual “marriage.” Lesbians, gays, bisexuals, transgenders, and queers make up some of Obama's major sources of political and financial support, according to Fox News.

Applause and cheers repeatedly interrupted the president's speech as he proclaimed, “Religious freedom doesn't grant us the freedom to deny our fellow Americans their constitutional rights.”

Obama also noted that some parts of the country remain uncomfortable with same-sex marriage, and that it will take time for them to catch up to the rest of society, which supports homosexual marriage.

Kentucky county clerk Kim Davis was thrown in jail September 3 for refusing to sign her name to homosexual “marriage” licenses, because to do so violated her Christian faith. Federal District Judge David L. Bunning said Davis would remain in jail until she complied with the court's order to issue marriage licenses. After spending a week locked up, Davis still refuses to sign but allows other clerks to issue licenses to homosexuals.

Davis now says of the ordeal, quoting the Bible, that “I count it all a joy.” James “the Brother of God” wrote to Christians, “Count it all joy, brethren, when you meet various trials, knowing that the testing of your faith produces steadfastness.  And let steadfastness have its full effect, that you may be perfect and complete, lacking in nothing.” Davis also switched political parties, from Democrat to Republican.

President Obama also said to his gay audience that he attributes the Supreme Court gay “marriage” decision to the “unbending sense of justice” on the part of homosexual activists and their allies, and he included himself among those allies. He had high praise for himself, as he invoked his 2008 campaign theme of “Yes We Can,” saying, “People, no matter … who they love, can change this country.”

Obama also listed his several homosexual initiatives, including a hate crimes law, barring federal contractors from discriminating against homosexuals, and refusing to defend the law popularly known as “Don't Ask, Don't Tell,” allowing homosexuals to serve in the U.S. Military but not allowing them to openly proclaim their inclination. “'Don't Ask, Don't Tell' is something that 'Don't Exist,'” the president said, to cheers and applause.

Obama had just hosted Pope Francis on the White House south lawn on Wednesday. “Mr. President,” the pontiff said, “American Catholics are … concerned that efforts to build a just and wisely ordered society respect their deepest concerns and the right to religious liberty.”

In front of the president, Pope Francis concluded, “All are called to be vigilant … to preserve and defend [religious] freedom from everything that would threaten or compromise it.”

The Holy Father put his speech into action later that day by making an unscheduled stop to visit the Little Sisters of the Poor, who are being sued by the Obama administration for refusing to violate their faith and pay for abortion, sterilization, and contraception insurance.

Istituto Acton's Kishore Jayabalan, who formerly worked for the Vatican's Pontifical Council for Justice and Peace, told the Christian Post that the pope showed “solidarity with [the Little Sisters of the Poor] in their fight against the Obama administration.”

“He showed with his actions that he is on the side of the underdog against the behemoth of ObamaCare,” Jayabalan said, adding that the pope “encourages us all to continue the fight against the powerful.”

On the flight back to Rome, the 78-year-old leader of the world's 1.2 billion Catholics further noted, “Conscientious objection must enter into every juridical structure because it is a right. … Otherwise we would end up in a situation where we select what is a right, saying: 'This right has merit, this one does not.'”

Jim Obergefell, the plaintiff in the Supreme Court decision to constitutionalize homosexual “marriage,” introduced Obama at the homosexual Democratic fundraiser.