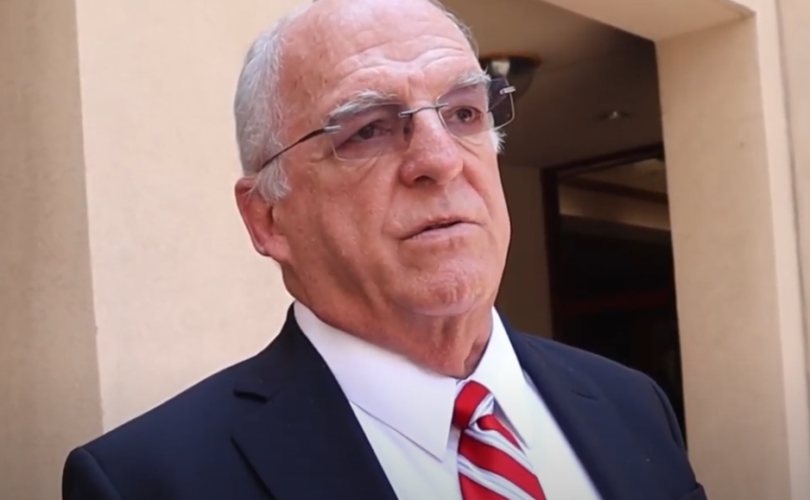 GAINESVILLE, Florida (LifeSiteNews) – Dr. Quentin Van Meter, president of the American College of Pediatricians (ACPeds), slammed the use of puberty blockers for children with gender dysphoria, describing the practice as “child abuse.”

In an exclusive interview with LifeSiteNews, Dr. Van Meter, a Johns Hopkins-trained pediatrician and pediatric endocrinologist, reiterated ACPeds’ position that prescribing hormone blockers for gender dysphoria violates medical ethics and said it should be criminalized.

“We said in our policy statement that it is child abuse for all intents and purposes,” he said, “and that it is taking a very healthy, intentionally designed part of life where a child goes from being a non-reproductive individual to becoming a reproductive individual in a time frame and an age frame where the physiology is there to change the physical body in terms of bone structure, in terms of organ structure, in terms of brain maturation.”

“If you are interrupting that with clearly the intent of never having it go the direction that nature intended, with biological males ending up as adult males and biological females ending up as adult female, if you interrupt that, you are basically setting up a disease state,” Van Meter continued. “And then on top of that, the purpose is clearly in the vast majority of kids that get on puberty blockers, they will not be allowed to go through their own natural puberty. They will be held back and then given cross-sex hormones.”

“So it’s a conveyor belt. And once that patient is placed on the conveyor belt of puberty blockers, they are carried down the assembly line to cross-sex hormones. And then at the end, have an option to do surgery to mutilate their bodies to appear like the opposite sex.”

Though federal regulators have never approved any medication for gender dysphoria, dozens of gender clinics around the country have started prescribing hormone blockers to children off-label in recent years to halt their puberty and affirm their so-called “transgender identities.” Planned Parenthood has moved into the puberty blocker business as well, as have major health systems, like Kaiser Permanente and the Mayo Clinic, regardless of the fact that the drugs are linked to a host of serious, permanent side effects.

One of the most commonly prescribed puberty blockers, Lupron, can lead to  “osteoporosis, mood disorders, seizures, cognitive impairment and, when combined with cross-sex hormones, sterility,” according to ACPeds. Another one, Vantas, is associated with osteoporosis, kidney damage, and liver problems, among other things.

Hormone blockers also frequently lead to emotional issues – reported in upwards of 20 percent of users – that can ultimately leave patients unmanageable, Dr. Van Meter told LifeSite. Psychiatric side effects have been reported for years in adults treated with the drugs according to their FDA-approved purposes, like prostrate cancer, and in children treated for precocious puberty.

“In the adolescent, there is no data that has ever been gathered over a period of 10, 15, or 20 years. They are guessing and hoping. This is one large experiment on American children.”

“And that should never be done on children and adolescents. It shouldn’t be done on adults. We have committees to protect human subjects, which are designed specifically to say, if you see the potential for adverse outcome in any other clinical scenario, you should not even design a study that would put the patient at risk.”

Proponents of the dangerous, experimental drugs often claim, without evidence, that gender-confused children will commit suicide if refused puberty blockers, Van Meter said. “But what we do know from pouring over data is that all of these children have severe emotional problems going in, and they’re not because they are gender dysphoric and caused by societal rejection.”

“They have deep emotional problems, which is why the world is now turning around and saying, those are what you evaluate, those are what you treat, leave the gender dysphoria on the sidelines and it will resolve with time, as it does in 80 to 90 percent of children who get the chance to have that kind of counseling and evaluation.”

Virtually all gender-confused kids given puberty blockers end up on cross-sex hormones, which often result in sterilization and typically lead to mutilating transgender surgeries.

At the same time, up to nearly 100 percent of boys and 90 percent of girls with gender dysphoria naturally come to accept their biological sex by adulthood, according to the most recent edition of the American Psychiatric Association’s Diagnostic and Statistical Manual of Mental Disorders.

Van Meter pointed to professional societies and governments in Sweden, Finland, the U.K., Australia, and New Zealand that have recently moved to emphasize mental health evaluation and counseling over drugs and surgeries for kids with gender dysphoria.

“And the organizations such as the Endocrine Society, the Pediatric Endocrine Society, and the World Professional Association of Transgender Health, their treatment guidelines should be viewed exactly what they are: the viewpoint of a small group of individuals who are all like-minded and have never, ever considered and never brought in and presented the broad spectrum of people who treat kids with gender dysphoria,” he said.