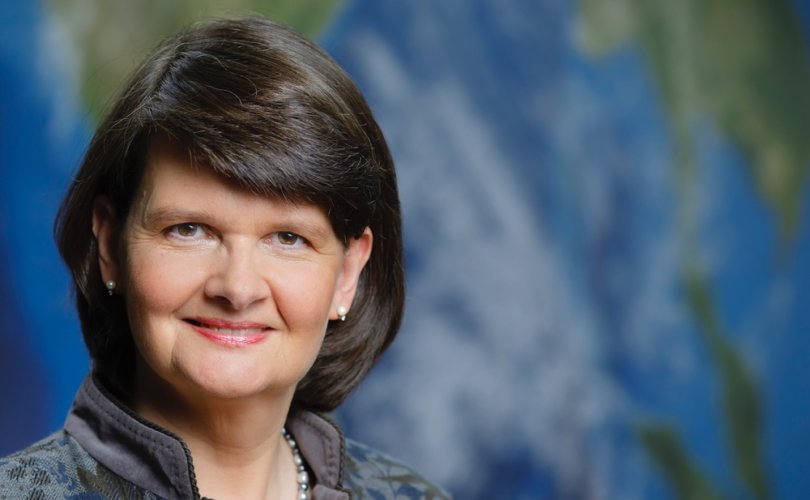 BERLIN, Germany, June 19, 2020 (LifeSiteNews) – The president of the Catholic Women’s Association in Germany moonlights as a “champion” for a multi-million dollar radical abortion activist group that was founded four years ago in reaction to US President Donald Trump cutting off funding for international abortion groups.

Maria Flachsbarth, a member of parliament for the Christian Democratic Union since 2002, is an outspoken advocate for “SheDecides,” a pro-abortion and pro-contraception organization.

The manifesto of the group states that every woman can decide “whether, when, and with whom” to “have sex” and to “have children.”

“She has the right. To information, to health care, to choose. She is free. To feel pleasure. To use contraception. To access abortion safely. To decide.”

“SheDecides has managed to create the positive momentum for sexual and reproductive rights, which we so desperately need in these very challenging times,” Flachsbarth said, according to the SheDecides website.

As president of the German Catholic Women’s Association, Flachsbarth represents about 180,000 members all across the country. The organization was founded in the early 20th century with the aim of “deepening the Catholic ideal of womanhood in family, work, and public life.”

Flachsbarth admitted to using her political influence at any given opportunity “to speak about these issues and put the topic on the agenda.”

“I am very glad that becoming part of the SheDecides Movement provides me – and the Ministry – with new opportunities to speak out even more loudly for the rights of girls and women,” Flachsbarth said.

She expressed her conviction “that the limited access to sexual and reproductive health services and the curtailing of reproductive rights are among the biggest challenges girls and women face today.”

“I strongly believe that only by ensuring universal access to sexual and reproductive health services we can reach true empowerment of women and girls,” she added.

“Her right to decide is a basic human right and therefore, there really can be no question [emphasis in original],” Flachsbarth claimed. “And if we truly want to empower women and girls and enable them to fully take part in social and economic life, we need to start to ensure that they can decide.”

Hubert Hüppe, a pro-life member of the Christian Democratic Union, called out Flachsbarth for her involvement with SheDecides, asking, “Who would think that the president of the Catholic Women’s Association, in a sense the highest-ranking Catholic woman in Germany, is the German face of an organization that has the legalization of abortion until birth at the top of its agenda?”

In his conversation with Catholic weekly newspaper Die Tagespost, Hüppe demanded from the bishops to send “a clear message here” with regard to dealing with Flachsbarth, “otherwise they will lose their credibility.”

In a statement released on her website earlier today, Flachsbarth doubled down on her role as a “champion” for SheDecides.

“In fact, I strongly support the right of every woman to decide for herself if, when, with whom, and to how many children she wants to give birth,” she said.

In the same statement, she also defended contraception as a means to prevent abortions.

Flachsbarth’s positions on abortion and contraception are directly opposed to Catholic teaching on these matters.

The Catechism of the Catholic Church unequivocally condemns abortion, going back to the teaching of the apostles in the time of the early Church. “You shall not kill the embryo by abortion and shall not cause the newborn to perish,” the Didache, a Christian treatise from the first century, emphasized.

“Since the first century the Church has affirmed the moral evil of every procured abortion. This teaching has not changed and remains unchangeable. Direct abortion, that is to say, abortion willed either as an end or a means, is gravely contrary to the moral law,” according to the Catechism.

Apart from abortion, the Catechism of the Catholic Church also teaches that contraception is “intrinsically evil,” arguing that “the innate language that expresses the total reciprocal self-giving of husband and wife is overlaid, through contraception, by an objectively contradictory language, namely, that of not giving oneself totally to the other. This leads not only to a positive refusal to be open to life but also to a falsification of the inner truth of conjugal love, which is called upon to give itself in personal totality.”

Flachsbarth, however, does not appear to be bothered by Church teaching. “For me, looking away is not an option,” she said. “Therefore, as a Catholic Christian, I am committed to the rights of women and thus also to responsible parenthood.”

SheDecides was started in 2017 “as a movement to support the rights of girls and women to decide freely and for themselves about their sexual lives, including whether, when, with whom and how many children they have.”

According to its own website, the movement came about “as an urgent response to US President Donald Trump’s reinstatement and dramatic expansion of the Global Gag Rule – also known as the Mexico City Policy – in January 2017.”

The Mexico City Policy prevents the federal government of the United States from giving money to any non-governmental organization outside of the country if these groups are also advocating for and providing abortions.

SheDecides quickly rose to become one of the most well-funded and politically well-connected pro-abortion and pro-contraception organizations worldwide.

Since its founding not even four years ago, the group has received more than $450 million in funding from numerous sources.

The International Planned Parenthood Federation, together with its member organizations, contributed more than $65 million. Another large abortion provider operating across the globe, Marie Stopes International, gave over $35 million.