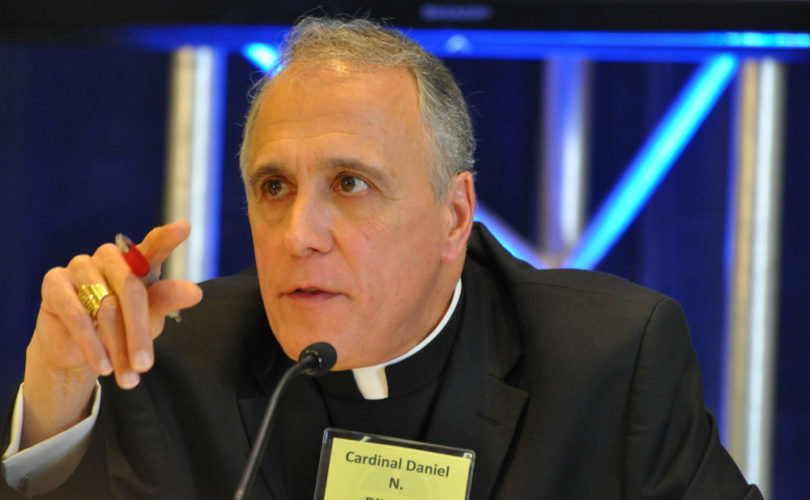 June 5, 2019 (LifeSiteNews) – Cardinal Daniel DiNardo, President of the US Conference of Catholic Bishops, is being accused of covering up a sexual abuse case in his Archdiocese of Galveston-Houston involving the archbishop’s right-hand man.

Laura Pontikes, 55, told the Associated Press (AP) that she went to Cardinal DiNardo in 2016 to report to him that the archdiocese’s Vicar General, Msgr. Frank Rossi, had seduced her into a sexual relationship after she went to him for spiritual counseling during a period of psychological vulnerability. Such acts are criminal under Texas law, which prohibits clergy from having sexual relationships with those to whom they are providing counseling services, and the AP reports that Rossi is under investigation by Houston police.

Pontikes says that DiNardo thanked her and called her a “victim” of Rossi, and promised that he “would never be a pastor or counsel women” again, in the words of the AP. However, Pontikes discovered only months later that Rossi had been made a pastor of a parish in nearby Beaumont, where he was offering marriage counseling. Pontikes’ husband told the AP that when he confronted DiNardo about the reassignment of Rossi, “the cardinal warned that the archdiocese would respond aggressively to any legal challenge — and that the fallout would hurt their family and business,” in the words of the AP.

The Bishop of Beaumont, Curtis L. Guillory, issued a press release stating that Rossi had been removed from his position as pastor, and claiming that “Msgr. Rossi came to our diocese from the Archdiocese of Galveston-Houston as a priest in good standing,” but admitting that he had known that his transfer had followed his participation in “a renewal program for clergy and religious in order to ensure he possessed the necessary tools to live a holy priestly life.” Guillory added that “the renewal center staff recommended Msgr. Rossi’s return to active priestly ministry without restrictions.”

The Archdiocese of Galveston-Houston issued a vague but strongly-worded “rejection” of the AP article, claiming it was “biased,” and accusing the Pontikeses of seeking a big payout from the archdiocese. However, it did not address most of the accusations made against Rossi, nor did it deny that Rossi had been made a pastor despite promises to the contrary.

“The Archdiocese of Galveston-Houston categorically rejects the unprofessional, biased and one-sided reporting contained in today’s Associated Press story headlined ‘The Reckoning,’” stated the archdiocese. “At each step in this matter, Cardinal DiNardo has reacted swiftly and justly — and has always kept the welfare of the Pontikeses in mind. A number of the quotes attributed to the Cardinal are an absolute fabrication.”

“On August 1, 2017, Laura Pontikes, accompanied by her psychologist, met with a representative of the Archdiocese and Laura made, among other requests, a demand for a $10 million payment,” the archdiocese added. “Monsignor Rossi completed his rehabilitation process and was recommended to be returned to active ministry by the professionals who assessed him. Cardinal DiNardo, at the request of the Pontikeses, agreed not to reassign Monsignor Rossi in any capacity in the Archdiocese of Galveston-Houston. He communicated this decision to the Pontikeses and Mr. Pontikes expressed his gratitude for that decision. The Archdiocese will continue cooperating with the authorities looking into this matter.”

The accusation of a sex abuse coverup is the third in less than a year for Cardinal DiNardo. In September of 2018, the AP reported that DiNardo had been accused of covering up by two alleged victims of Fr. Manuel La Rosa-Lopez, a priest under investigation for sex abuse of minors. One alleged victim told the AP that DiNardo and other top clergy assured her the priest would never have access to children again, but he continued as pastor of a parish and even functioned as Episcopal Vicar for Hispanics for the whole archdiocese. Another alleged victim said that DiNardo was dismissive of his complaint against the priest.

As a result of the allegations against Fr. La Rosa-Lopez, police have raided archdiocesan offices multiple times since late 2018 to obtain records on the priest, and even seized Cardinal DiNardo’s personal computer. In one case, the police in Conroe, Texas had to pick the lock of a vault to find relevant records that the archdiocese had not delivered to the authorities, despite a court-issued subpoena requiring the transfer of the records. New tips have led to investigations against other priests of the archdiocese.

Following revelations of the accusations against La Rosa-Lopez and DiNardo himself, Cardinal DiNardo and other Texas bishops published a list of “credibly accused” clergy that some alleged was incomplete, and DiNardo issued a statement of “apology” that simultaneously defended his handling of such cases and admitted no guilt. “We can and must do better,” wrote DiNardo.

As president of the US Conference of Catholic Bishops, DiNardo has presided over the process of formulating new procedures to deal with clerical sex abuse in the wake of revelations that Cardinal Theodore McCarrick preyed sexually on seminarians and was allowed to continue carrying out public roles even after he had been disciplined by Pope Benedict XVI. In just under a week DiNardo will be leading a meeting of the US Conference of Catholic Bishops to approve the new procedures.

Rossi took millions in donations from husband he was cuckolding, AP reports

The AP says that it has obtained emails and other documents that show that Rossi’s relationship with Pontikes had continued for years, even as Rossi counseled Pontike’s husband on his marital problems, and hit the wealthy couple up for donations for his parish, which ultimately amounted to $2 million. The emails purportedly show Rossi grooming Pontikes for the affair and claiming that their relationship has legitimate spiritual purposes, calling his caresses “holy touches.” Pontikes later recounted in a video interview with AP that he said that their illicit relationship was “of God,” and “let’s give it to God and see what he does with it.”

Rossi also allegedly heard Pontike’s confession regarding sexual acts they committed together, which, if true, would result in the automatic excommunication of Rossi in accordance with the Code of Canon Law, a penalty that could only be lifted by Pope Francis himself (canons 977, and 1378).

The archdiocese denies that Rossi heard any confessions by Pontikes, but the AP states that emails between the two suggest otherwise. The archdiocese also told the AP that the relationship was sexual but did not involve sexual intercourse, and that Pontikes continued to send “hundreds of unsolicited messages” to Rossi after he ended the physical relationship.

Pontikes told the AP that Rossi had little fear of suffering the consequences of his actions, because as the archdiocesan point man in many abuse cases, he believed his knowledge of compromising information made him untouchable. “I know where all the bones are buried,” he was quoted as saying.

When Pontikes discovered that Rossi had been made a pastor of another parish, rather than being placed in a ministry away from women, she decided to go public with her story. “They’re not going to play with my life like this,” Pontikes told the AP. “They just can’t get away with it…Somebody had better stand up and tell the damned truth.”

Email the author at [email protected].