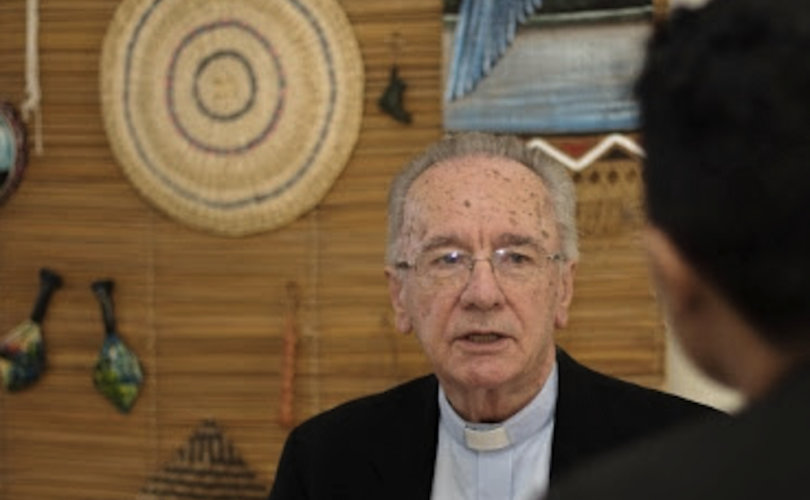 June 30, 2020 (LifeSiteNews) — Eight months after the conclusion of the Amazon Synod in the Vatican, bishops and other Catholic leaders from across the Amazon region on Friday have founded the Amazon Ecclesial Conference. Cardinal Cláudio Hummes, who is a supporter of having married priests, was elected as president of the new organization.

While not much is known yet about the goals of the Amazon Ecclesial Conference, newly elected president Hummes, from Brazil, shortly after the publication of Querida Amazonia, stated that the discussion of married priests has not been closed. Hummes is also the head of REPAM and was a member of the drafting committee of the synod’s final document calling for female deacons and married priests.

According to the Spanish edition of Vatican News, the conference’s approach “highlights two orientations, following the apostolic exhortation Querida Amazonia: the ecclesial and ministerial incarnation” according to section 85 of the document and the development in the Church of the capacity “to be open to the Spirit’s boldness, to trust in, and concretely to permit, the growth of a specific ecclesial culture that is distinctively lay. The challenges in the Amazon region demand of the Church a special effort to be present at every level, and this can only be possible through the vigorous, broad and active involvement of the laity (QA 94).”

Hummes said on Friday, “This conference is part of the new paths that the Special Synod of Bishops for the Amazon proposed. It is our responsibility to constitute this Conference, encouraged by our beloved Pope Francis. He himself suggested the name.”

At the first meeting of the Amazon Ecclesial Conference, several representatives of the Vatican were present, albeit only virtually due to coronavirus restrictions around the globe. Among them were Cardinal Baldisseri, secretary general of the Synod of Bishops; Cardinal Ouellet of the Congregation for Bishops; Cardinal Tagle of the Congregation for the Evangelization of Peoples; and Cardinal Czerny, under-secretary of the Migrants and Refugees Section of the Dicastery for Promoting Integral Human Development.

The creation of the Amazon Ecclesial Conference is an outgrowth of the final document of the Amazon Synod, which is not the same as Pope Francis’s post-synodal apostolic exhortation Querida Amazonia. The final document had proposed “the creation of a Bishops’ organism that promotes synodality among the churches of the region, helps to express the Amazonian face of this Church and continues the task of finding new paths for the evangelizing mission, especially incorporating the proposal of integral ecology, thus strengthening the physiognomy of the Church in the Amazon.”

According to the document, “[i]t would be a permanent and representative Bishops’ organism that promotes synodality in the Amazon region, connected with CELAM, with its own structure, in a simple organization and also connected with REPAM.”

CELAM is the Latin American Episcopal Council, created in 1955. REPAM, on the other hand, is the Pan-Amazonian Ecclesial Network, founded in 2014 to “bring to the world’s attention the fragile situation of indigenous people in the Amazon and the critical importance of the Amazon biome to the planet — our common home.”

According to Cardinal Gerhard Müller, former head of the Congregation for the Doctrine of the Faith (CDF), the body was “tasked with the preparation” of the working document ahead of the Amazon Synod, adding it “was founded for that very reason in 2014.” The Vatican also signaled in comments to the National Catholic Register that REPAM’s purpose was to help draft the preparatory and working documents for the October synod.

REPAM and key figures from the Vatican’s Secretariat for the Synod were behind the private pre-synod “study-meeting” held in the summer of 2019, whose final report included a push for married priests and a reconsideration of the female diaconate. Cardinal Walter Kasper, Bishop Erwin Kräutler, and Bishop Franz-Josef Overbeck also participated in the private meeting.

Cardinal Müller has described REPAM as a “closed group” made up of “absolutely like-minded people, as can easily be gleaned from the list of participants at pre-synodal meetings in Washington and Rome, and it includes a disproportionately large number of mostly German-speaking Europeans.”

The newly constituted Amazon Ecclesial Conference was envisioned by the final document of the Amazon Synod to be “the effective instrument in the territory of the Latin American and Caribbean Church for taking up many of the proposals that emerged in this Synod. It would be the nexus for developing Church and socio-environmental networks and initiatives at the continental and international levels.”

The apostolic exhortation Querida Amazonia does not mention the idea of creating an ecclesial conference. However, Pope Francis said he “would like to officially present the Final Document, which sets forth the conclusions of the Synod, which profited from the participation of many people who know better than myself or the Roman Curia the problems and issues of the Amazon region, since they live there, they experience its suffering and they love it passionately.”

Observers have taken this to mean that the Holy Father did not want to take anything off the table that was proposed in the final document but not taken up by Querida Amazonia – specifically the ideas of female deacons and married priests.