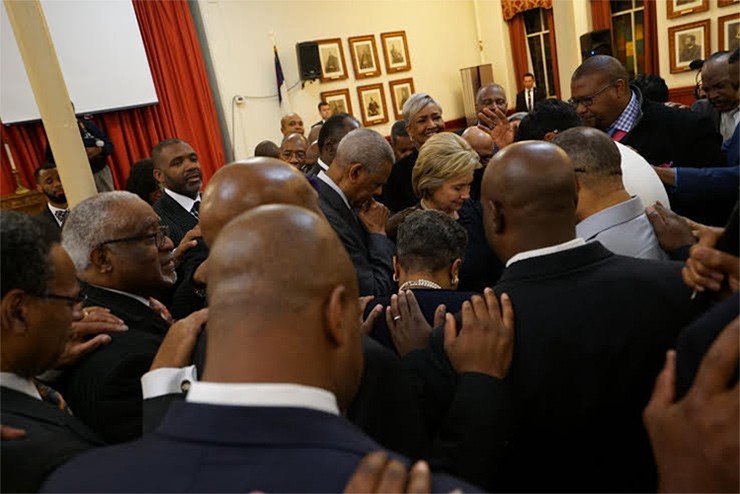 The African-American ministers “laid hands” on Clinton and prayed to “decree and declare the favor of the Lord” upon Clinton, who is in a neck-and-neck race with Bernie Sanders for the Democrat nomination for president.

“President-to-Be Clinton, we decree and declare from the crown of your head to the soles of your feet that the favor of the Lord will surround you like a shield, in Jesus's name,” they prayed, at Mother Bethel African Methodist Episcopal Church in Philadelphia.

The Clinton campaign proceeded to vigorously oppose proposed legislation in Oklahoma designed to save pre-born babies.

Oklahoman Thomas Hunter filed for a petition to change the state constitution so that it prohibits any action “that causes the death of an unborn human being” – whether abortion or post-conception “contraception.”

Clinton campaign senior adviser Maya Harris came out vehemently against putting Hunter's petition on the state's ballot, calling it “unconstitutional” and “bad for the health of Oklahoma women.”

Speaking on behalf of the Clinton campaign, Harris said, “This initiative petition should be challenged and, if it makes it on the ballot, rejected by Oklahomans.”

Reaction to the two contradictory acts – the religious blessing and the condemnation of pro-life legislation – was swift and strong among African-American ministers.

“It is shameful to see clergy abandon the principles of the faith and engage in such heretical political pandering,” the Reverend Dr. Clenard H. Childress, Jr. told LifeSiteNews. “These clergy represent the problem the church has in the clarity of its message and the demonstration of its worth.”

“There was a time when the church was very powerful – in the time when the early Christians rejoiced at being deemed worthy to suffer for what they believed,” Rev. Childress, founder of Black Genocide, told LifeSiteNews. “In those days, the church was not merely a thermometer that recorded the ideas and principles of popular opinion; it was a thermostat that transformed the mores of society.”

“So often the contemporary church is a weak, ineffectual voice with an uncertain sound,” Rev. Childress concluded. “So often it is an arch-defender of the status quo.”

“Abortion remains the number-one killer of black Americans, higher than all other causes of death combined,” Pastor Arnold M. Culbreath, a founding member of the National Black Pro-Life Coalition, told LifeSiteNews. “Therefore, it is absolutely critical that blacks become informed, equipped, and provided with resources to end the abortion-related genocide occurring in our communities every day.”

“With Hillary Clinton's extreme and consistent pro-abortion views and actions,” Pastor Culbreath asserted, “it is a travesty that pastors would be more focused on laying hands on her, rather than challenging her views with credible research and making her aware of the devastating impact abortion is having on black babies, mothers, and families across America. Black lives depend on it!”

“We have the most anti-life president in office now, because Christians put him there,” Pastor Walter and Darleen Moss told LifeSiteNews in a joint statement. “Will Christians continue to ignore what may be the most significant issue of the coming presidency – the issue of life?”

Then the Mosses spoke to African-American clergy who toe the Democrat party line. “If these good pastors read their Bibles, they would know that it clearly says, 'Jesus is the LIFE.' Therefore, is not pro-abortion anti-life and anti-Christ? Are we not made in the image of God? Does He not know us in the womb?”

“Pastors may be close to, if not at, apostasy to continue to endorse any candidate who endorses the murder of our children,” the Mosses concluded. “That would include Hillary Clinton, a champion for eugenics and Margaret Sanger and Planned Parenthood, the number-one killer of our babies in the USA and around the world through the United Nations.”

Rev. Childress quoted Dr. Martin Luther King, Jr. against “Hillary Clinton and Barack Obama's insidious alliance with Planned Parenthood and the abortion industry”: “'Racial discrimination … relegates persons to the status of things. … It is a tragic expression of man's spiritual degeneracy and moral bankruptcy.' So it is not surprising to see Hillary Clinton's negative response to recognizing infants as persons and not things.”

Hunter's proposed amendment to the Oklahoma constitution would also ban “the deliberate destruction of unborn human beings created in a laboratory.”

Hunter, who filed the constitutional petition in Oklahoma, explained to the Tulsa World, “The question is whether or not the Supreme Court ruling that born people have the right to kill unborn people was, in fact, constitutional in the first place.”