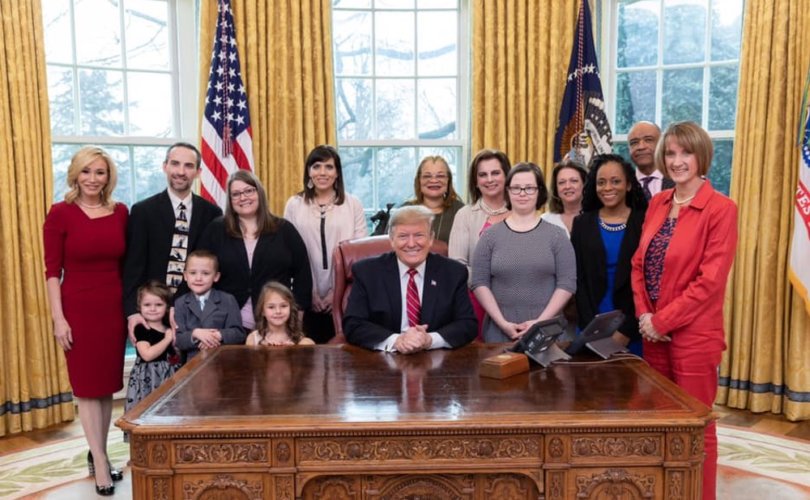 WASHINGTON, D.C., February 15, 2019 (LifeSiteNews) – Yesterday at the White House, President Trump hosted Melissa Ohden, a woman who survived a late-term abortion, and a six-year-old boy named Micah Pickering who was born at 22 weeks.

Dr. Alveda King, the niece of Dr. Martin Luther King, Jr., pro-life activist Christina Marie Bennett, Susan B. Anthony List president Marjorie Dannenfelser – who briefed the president on the attendees – and Katie Shaw, a pro-life advocate with Down Syndrome, were also there. So were Pastor Paula White and the Alexander Family, whose adopted daughter Katharine was born opioid-dependant.

Trump also engaged in a conference call with pro-life advocates. He referred to his State of the Union address in which he condemned not only New York’s new law that expanding abortions up to birth, but also Virginia Governor Ralph Northam, the Democrat who promoted infanticide of newborn babies during a radio interview.

Ohden survived a late-term abortion when her mother was seven months into her pregnancy. Later in life, Ohden found out that her young mother, who had been forced into the abortion, deeply regrets that she did little to save her baby’s life.

“I can tell you that in our private time with him, he was warm, so very funny, genuine, and yes, fired up about a few things, including the protection of life,” Ohden wrote on Facebook of her meeting with Trump. “It was a historical moment, to have the survivor of a failed abortion in the West Wing, and although I wish other survivors could have been there with me, I can honestly tell you I thought of them throughout my time there, and I have the utmost hope that this is just the first step in having survivors acknowledged, included, and supported by the Trump administration and maybe even our greater culture.”

Micah Pickering’s story has been used to illustrate the inhumanity of late-term abortion – babies in utero who are farther along than Micah when he was born are legally aborted in the U.S.

“With compassion and assurance, President Trump spoke to thousands of Americans from the Oval Office [yesterday]: ‘Thank you very much and I want to thank all the 1,000s of pro-lifers and pro-life leaders, pastors, families, and advocates for joining this call and for working with such love and devotion to build a culture that cherishes human life,’” Dr. King recalled. She thanked President Trump for “his latest life affirming action” on Valentine’s Day, writing for Newsmax that he “shines light and hope for babies in the womb, and for those who are unjustly bound in other tenuous situations.”

“It was refreshing and encouraging to be treated with respect and kindness by the President and White House staff,” Bennett told LifeSiteNews. She explained that earlier in the week, she testified in support of pregnancy centers and against a bill (HB 7070) attacking them at a Public Health Committee meeting in Connecticut.

“I’m unfortunately used to pro-abortion elected officials in my state disregarding my story of being scheduled to be aborted and attacking the work of pro-lifers,” she said. “It’s wonderful to know that President Trump believes our cause is worthy and our stories deserve to be heard.”

Earlier this week, Ohden shared her powerful story with Jonathon van Maren on The Van Maren Show, LifeSite's brand-new weekly podcast. Read about her incredible story by clicking here or hit play below.

The Van Maren Show is hosted on numerous platforms, including Spotify, SoundCloud, YouTube, iTunes and Google Play. For a full listing of episodes, and to subscribe via various channels, visit our Pippa.io webpage here. To receive an email when a new episode is uploaded, click here.