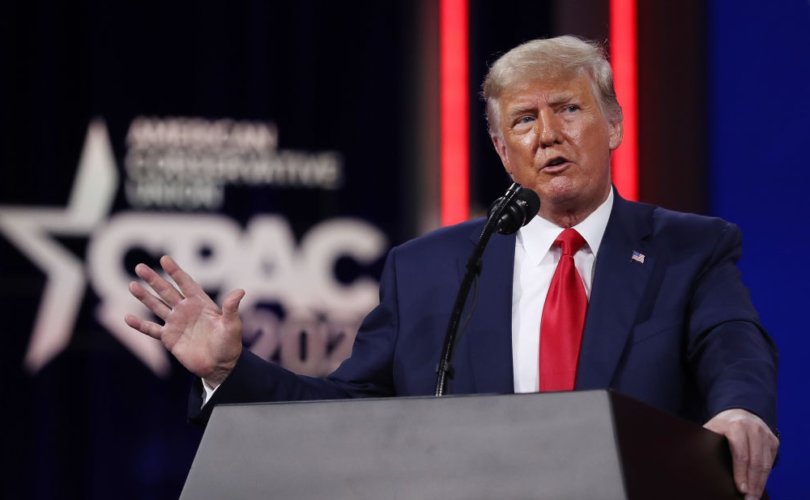 ORLANDO, FLORIDA, March 1, 2021 (LifeSiteNews) — Former President Donald Trump laid out his vision for the future of the Republican Party and election integrity efforts in a powerful closing speech at the Conservative Political Action Conference (CPAC) on Sunday.

“As we gather this week, we’re in the middle of a historic struggle for America’s future, America’s culture, and America’s institutions, borders, and most cherished principles,” Trump said.

“For the next four years, the brave Republicans in this room will be at the heart of the effort to oppose the radical Democrats, the fake news media, and their toxic cancel culture,” he added, saying, “I want you to know that I’m going to continue to fight right by your side.”

Trump particularly highlighted “ensuring fair, honest and secure elections,” as “one of the most urgent issues facing the Republican Party.”

“We must pass comprehensive election reforms and we must do it now. The Democrats used the China virus as an excuse to change all of the election rules without the approval of their state legislatures, making it therefore illegal,” Trump said. “This alone would have easily changed the outcome of the election.”

“They would have local courts and local politicians change the rules, in some cases a day or two before the election,” he continued, referring to legally contested rule changes in swing states, some of which have been deemed illegal in court.

“We can never let this or other abuses of the 2020 election be repeated, or happen again,” Trump stressed. “Democrats used COVID as a way of cheating. That’s what happened and everybody knows it.”

“They used it as a way of getting what they wanted for many years. And the Republicans have to do something about it,” for example, by blocking congressional Democrats’ massive, anti-voter ID “election reform” bill, H.R. 1, Trump said.

“We should eliminate the insanity of mass and very corrupt mail-in voting. We must have voter ID,” Trump said. “You know, to get into the Democrat[ic] National Convention, when they [had] the convention, you needed voter ID, you needed an ID card,” he added. “They know that. This is a con job.”

President Trump also blasted the Supreme Court for repeatedly refusing to rule on election lawsuits over the objections of dissenting justices.

“This election was rigged and the Supreme Court and other courts didn’t want to do anything about it. They should be ashamed of themselves for what they’ve done to our country,” he said.

“They didn’t have the courage to act, but instead used process and ‘lack of standing.’ I was told the President of the United States has no standing,” Trump said. “It’s my election, it’s your election, we have no standing.”

Trump, who was de-platformed two months ago by top social media platforms, emphasized the need for regulation of Big Tech companies, saying that “all of the election integrity measures in the world will mean nothing if we don’t have free speech.”

“And if the federal government refuses to act, then [in] every state in the union where we have the votes, which is a lot of them, Big Tech giants like Twitter, Google, and Facebook should be punished with major sanctions whenever they silence conservative voices,” he said, noting that such measures are moving forward in Florida and Texas.

President Trump made multiple key announcements in his highly-anticipated speech on Sunday, including that he will not seek to form a new political party, calling rumors that he sought to do so “fake news.”

He teased a third presidential run, saying that Democrats actually “lost the White House” in November, but that he “may even decide to beat them for a third time.” A CPAC straw poll of thousands of attendees found that the 45th president was by far the most popular potential GOP candidate for 2024 and holds a 97% approval rating.

“Now more than ever is the time for tough, strong, and energetic Republican leaders who have spines of steel,” Trump said. “We cannot have leaders who show more passion for condemning their fellow Americans than they have ever shown for standing up to Democrats, the media, and the radicals who want to turn America into a socialist country.”

“And that’s why I’m announcing that I will be actively working to elect strong, tough, and smart Republican leaders,” he revealed. “We want Republican leaders who are loyal to the voters and who will work proudly for the vision that I’ve laid out today.”

“We will be united and strong like never before,” Trump continued, urging Republicans to define themselves against Democrats’ “radicalism” and “socialism” that “all leads to Communism.”

“The future of the Republican Party is as a party that defends the social, economic and cultural interests and values of working American families of every race, party and creed. That’s why the party is growing so rapidly,” he said.

Biden is ‘a catastrophe for American workers and American families’

“We are committed to defending innocent life and to upholding the Judeo-Christian values of our founders and of our founding,” President Trump said, contrasting Republicans to the hard-left, “anti-family” Biden White House.

“We all knew that the Biden administration was going to be bad but none of us even imagined how bad they would be and how far left they would go. He never talked about this,” Trump said.

“Your family still cannot go out to eat at local restaurants but Joe Biden is bringing in thousands upon thousands of refugees from all over the world,” he continued. “Biden has failed in his number one duty as a chief executive: enforcing America’s laws.”

Trump ripped the Biden administration for “bragging” about providing education to migrant children at the southern border, “while at the same time, millions of American children are having their future destroyed by Joe Biden’s anti-science school closures.”

“There’s no reason why the vast majority of young Americans should not be back in school immediately,” Trump said. “The only reason why most parents don’t have that choice is because Joe Biden has sold out America’s children to teachers’ unions.”

“It’s a scandal of the highest order and one of the most craven acts of any president in our lifetimes,” he said, pointing to the skyrocketing rise in suicide attempts among children and adolescents amid school closures. “So, on behalf of the moms, dads, and children of America, I call on Joe Biden to get the schools open and get them open now,” President Trump declared.

“Joe Biden and the Democrats are even pushing policies that would destroy women’s sports,” he added, referring to a Biden order mandating that gender-confused males be allowed to play on women’s sports teams.

“Now young girls and women are incensed that they are now being forced to compete against those who are biological males,” while “records that stood for years, even decades, are being smashed with ease,” Trump continued. “If this is not changed, women’s sports as we know it will die.”

“The task for our movement and our party is to stand up to this destructive agenda with confidence and with resolve,” he said.

As has become his regular habit in recent months, Trump hailed the work of his administration in the funding, development, and rollout of the experimental COVID-19 vaccines. The vast majority of people who contract the coronavirus do not die from the virus, and there are already effective and safe treatments for it.

“I handed the new administration what everyone is now calling a modern day medical miracle – some say it's the greatest thing to happen in hundreds of years, hundreds of years. Two vaccines produced in record time with numerous others on the way including the Johnson and Johnson vaccine that was approved just yesterday,” he said.

More than 1,000 deaths after COVID-19 vaccination have been reported to the U.S. government in the last three months, the U.S. Centers for Disease Control (CDC) revealed on Thursday. The numbers are likely an undercount, given the well-documented inefficiency of the CDC’s vaccine injury tracking system.

Meanwhile, the U.K. government has cautioned that pregnant and breastfeeding women should not receive the vaccine. In December 2020, it published a guide to medical professionals about the Pfizer vaccine recommending that it not be taken by pregnant women and advised women of childbearing age not to get pregnant within two months of accepting their second dose. Women were also warned that the vaccine should not be used during breastfeeding, as its effect on babies was still unknown. Regarding fertility, the 10-page “Reg 174 Information for UK Healthcare Professionals” said only that it was “unknown whether COVID-19 mRNA Vaccine BNT162b2 has an impact.”

Nevertheless, Trump urged everyone to receive a shot.

“I guess on December 21st we took care of Joe Biden because he got his shot, he got his vaccine…it shows you how unpainful that vaccine shot is, so everybody go get your shot.”

LifeSiteNews has produced an extensive COVID-19 vaccines resources page. You can view it here.