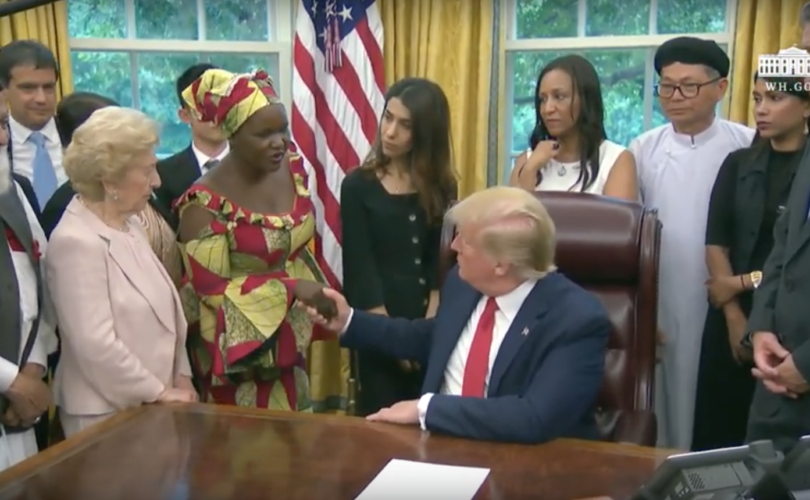 President Trump shakes the hand of Esther Bitrus, who is from Nigeria.WH.gov

WASHINGTON, D.C., July 19, 2019 (LifeSiteNews) – With a meeting near its end and more than two dozen victims of global religious persecution about to be ushered out of the Oval Office, President Trump insisted that they stay longer so that he could listen to more of their testimonies and requests for help.

Twenty-seven people from 16 countries who had been or are persecuted for their faith gathered around the president’s desk on Wednesday. Some spoke briefly of their harrowing plights and others simply thanked President Trump for his administration's efforts to promote and protect religious freedom.

Among the guests was Pastor Andrew Brunson, who languished in a Turkish jail before the Trump administration intervened to secure his freedom.

“What you have in common is each of you has suffered tremendously for your faith,” noted the President as he welcomed his guests to the Oval Office. “You’ve endured harassment, threats, attacks, trials, imprisonment, and torture.”

“In America, we’ve always understood that our rights come from God, not from government,” continued the President. “In our Bill of Rights, the first liberty is religious liberty. Each of us has the right to follow the dictates of our conscience and the demands of our religious conviction. We know that if people are not free to practice their faith, then all of the freedoms are at risk and, frankly, freedoms don’t mean very much.”

“That’s why Americans will never tire in our effort to defend and promote religious freedom,” said the President. “To me, it’s very important. It’s vital. It’s really vital.”

“You’ve been through a lot — more than most people could ever endure,” added the President. “It’s really an honor to be with you, and I will stand side by side with you forever.”

“Sir, I am from Bangladesh,” said one woman. “My request is: Please help us. We don’t want to leave our country. Just help, Mr. President. I have lost my home. They burned my home. They’ve taken my land.”

Ms. Zhang, a Falun Gong practitioner, told the President that her husband remains a prisoner for his faith in China. “And the forced organ harvesting still exists.”

“Mr. President, one to three million Uyghur population are locked up in concentration camps in China, including my father, who is now serving a life sentence. I haven’t seen him since 2013,” explained Ms. Ilham.

When President Trump asked her if she is able to communicate with her father, Ilham explained, “I haven’t heard about him since 2017, because that’s when the concentration camps started.”

“Anyone who goes to ask about anybody’s family members’ news will never make their way back to their own homes,” she added.

Esther Bitrus of Nigeria shook the President’s hand as she said, “I escaped from Boko Haram.”

Mr. Ju spoke of his family’s plight in North Korea, saying, “All of them, they are in political prison camp.”

“I don’t know where is; they just took [them] at the dawn,” because they are Christians, said Ju.  He also explained that his cousin’s family had been executed.

Among the last to speak was Nadia Murad, who received the 2018 Nobel Peace Prize for her work in helping women and children who are victims of abuse and human trafficking.

Murad told President Trump about her harrowing experience as a girl in Iraq: “When ISIS attack us in 2014, they killed six of my brothers. They killed my mom. They took me to captivity with my … sister-in-law, with all my sister and my nieces.”

“Today we have 3,000 Yazidi women and children in captivity,” she added.

During the course of the meeting, Pastor Paula White commended the President for his  courageous leadership. “I have watched, from day one and even before you took this office, you be a relentless fighter for people of all faiths and religious liberty.”

“We see it stateside — from you saying we can say ‘Merry Christmas’ again; to the DOJ passing laws that no other administration could pass to give high holy days to all religions to be able to take off of work and to honor that,” said White.

“So we thank you, President, for being the leader — the courageous leader to stand up not only in our nation, but countries all around, for all faith, of all people that we should have the practice and the right to practice our religion,” she added.