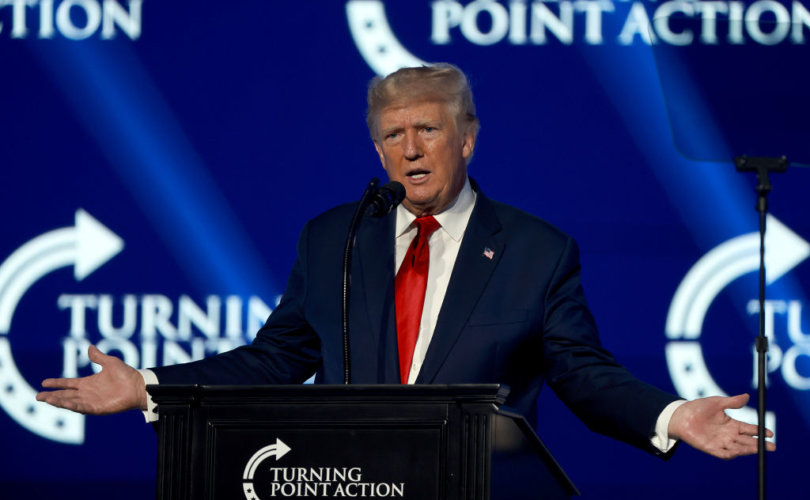 (LifeSiteNews) – In a speech on Saturday night, Donald Trump appeared to back away somewhat from his support of the LGBT movement and declared that there are only two genders.

Trump spoke for nearly two hours during the Turning Point USA Student Action Summit in Florida this weekend, addressing various issues that have risen throughout the Biden administration and promoting conservative actions to “take back our country.”

Trump: “We believe in two genders. There are men, and there are women.” pic.twitter.com/9ehyIqGJU4

“They believe in left-wing gender ideology and toxic critical race theory,” he said. “We believe in two genders. There are men and there are women. Two genders. And we believe that all Americans of every background are created free and equal by the hand of Almighty God.”

“The difference between our movement and the forces we’re fighting against could not be more stark,” the former president continued. “We believe in free thought, free assembly, free expression, and a thing called free speech.”

“These are the principles we’re fighting to defend each and every day. Over the past two years, the world has seen the radical left’s agenda in action, and it’s been very sad to watch. The results are worse than anyone could ever have even imagined.”

Trump went on to criticize the indoctrination that has taken root in public schools across the country. “The current educational system is so sick that school prayer is banned and drag shows are allowed,” he said. “You can’t teach the Bible, but you can teach children that America is evil and that men can get pregnant.”

He called on the young people gathered before him to “smash the radical left’s corrupt education establishment.”

“You would not trust these people to babysit your children for 20 minutes. Why should we, then, let them educate millions of American students, six hours a day, year after year?”

Although he followed through on pro-life and other socially conservative initiatives during his time in office, Trump was also known for publicly advocating LGBT lifestyles throughout his campaign and years in office.

During his campaign, Trump made consistent efforts to gain favor with the LGBT community. In August 2016, he went as far as to sell t-shirts which read “LGBTQ for Trump” on his official website. A month before, the Republican presidential nominee made history by being the first candidate of a major political party to address the LGBTQ community in public.

The following November, Trump received backlash for “shameless pandering” when he waved a rainbow flag at a rally. He has also been called the “most pro-gay president in American history”, as previously reported by LifeSiteNews.

Despite the many public statements and actions which endorse LGBT lifestyles, Trump spoke on Saturday in contradiction to his apparent support of this movement.

He also laid out steps to take in the future for the country to reclaim conservative values. “Across the United States, we need to implement strict prohibitions on teaching inappropriate racial, sexual, and political material to America’s children in any form,” he said. “We will also keep men out of women’s sports.”