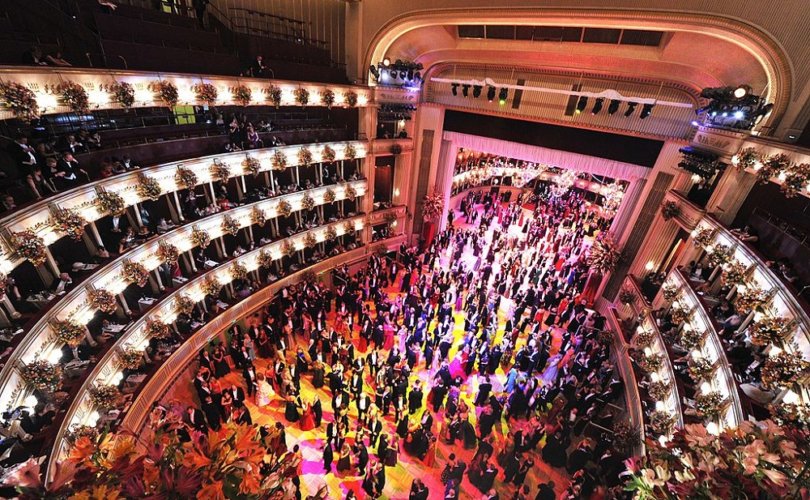 VIENNA, Austria, February 20, 2020 (LifeSiteNews) — A same-sex couple will participate in the prestigious Vienna Opera Ball for the first time in its history, dating back to the early 19th century. The annual event in Vienna features various traditional dances, drawing high-profile members of society, for instance the Austrian president.

“We were aware that our appearance would probably attract attention. We did not intend that, but we try to use it positively to draw attention to LGBTQ issues,” Sophie Grau und Iris Klopfer told Austrian newspaper Kurier.

Grau plans to dress like a man, in traditional black evening attire, while Klopfer will wear a white dress like all the other women. In addition to being in a homosexual relationship, Grau claims to be “a non-binary person.”

“I like to play into female and male facets the way I want. At the ball, male facets will come to the fore. I also think the clothes are a costume for all debutantes, because they aren’t everyday outfits for anyone,” Grau said.

In remarks to LifeSiteNews, Alexander Tschugguel, president of the St. Boniface Institute and an expert on traditional Austrian culture, criticized the opening of the Vienna Opera Ball for being used to push a certain political agenda. The participation of Grau and Klopfer displays “total ignorance towards our culture of balls,” he added.

This year’s Opera Ball will take place on Thursday, February 20. The ball season in Vienna traditionally ends with the beginning of Lent on Ash Wednesday.

One of the highlights consists of 150 young couples, “forming the young ladies’ and young men’s committee,” performing “the first polonaise” in the opera house of Vienna, according to the official website.

Maria Großbauer (Grossbauer), the organizer of the Opera Ball, stated that it is “absolutely right to include the female couple” in the event, as they had mastered a specific type of waltz. “By the way, the traditional black and white effect still remains while dancing, because it was clear to them that one lady wanted to wear a white dress and the other lady a black suit.”

Großbauer belongs to the Christian Democrats (ÖVP), which is the largest party in Austria. She has been a member of parliament since 2017.

There has been some criticism regarding the inclusion of a same-sex couple in the performance. Richard Lugner, a famous Austrian entrepreneur and society figure, described the Opera Ball as the largest traditional ball in the world.

“It should be a man and a woman dancing together,” he said, adding, “Destroying the image of the ball should be avoided.”

Every year, Lugner invites a celebrity to be his guest at the Opera Ball. In the past, his guests included Pamela Anderson, Paris Hilton, and Kim Kardashian. Lugner has been divorced five times.

Even though Lugner is not “the most classical and conservative man in Austria,” Tschugguel was not surprised by his criticism of this year’s Opera Ball. “As someone who participated in balls for many years, he simply knows what the opening of a ball is all about.”

The year 2020 is not the first year of the Opera Ball breaking with traditions. In 2019, singer and drag queen Thomas Neuwirth, better known as Conchita Wurst, attended the ball. He had been invited by Josef Moser, the Austrian minister of justice. Like Großbauer, Moser is a member of the Christian Democrats.

According to Tschugguel, the term “Christian Democrat” almost ridicules Christianity. He told LifeSiteNews that the ÖVP established homosexual “marriage” in Austria last year. “A member of the ÖVP being responsible for this scandal” of a same-sex couple at the Opera Ball, he said, “is hardly surprising.”

Tschugguel said that while he encourages people to experience a ball in Vienna, he can no longer recommend the Opera Ball.