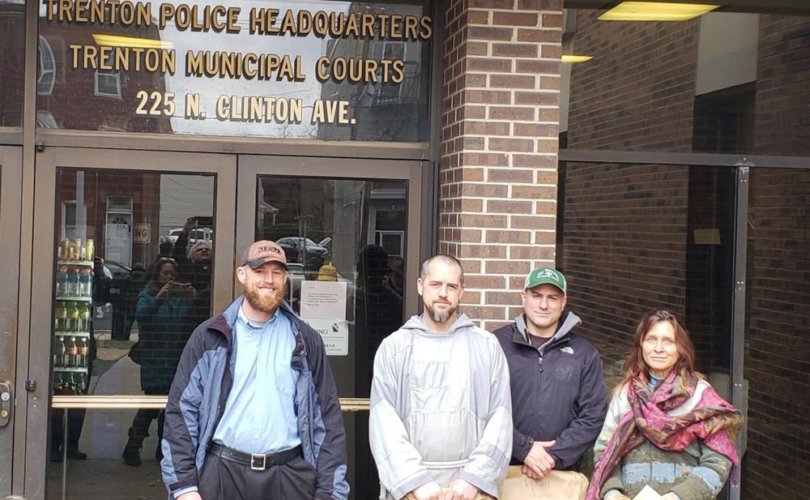 At roughly 9:00 a.m. on Saturday, December 22, pro-life advocates Father Fidelis Moscinski of the Franciscan Friars of the Renewal, William Goodman, Patrice Woodworth, and Matthew Connolly entered the abortion facility on State Street in Trenton. This was the first RRR at a Planned Parenthood. The pro-lifers counseled some six women in the waiting room and gave them roses.

After Goodman spoke to one of the women who was there for an abortion with her boyfriend, giving the couple literature with the rose and talking with them about the humanity of their unborn child, they got up and left the Planned Parenthood abortion facility.

“That was a victory to us that they did leave,” Citizens for a Pro-Life Society Director Monica Migliorino Miller told The Trentonian. “They were filing the paperwork for it (an abortion).”

“We don’t know if they are going to go back,” said Miller, “all we can say is they have left during the time of the rescue. We were very encouraged by that. If we hadn’t gone in there and that couple was not spoken to, that baby would probably be dead.”

As that was done, the rescuers remained in the waiting room praying and singing hymns until the police arrived. The officers warned the rescuers that they were trespassing, Miller said, but Goodman explained that they were needed there to defend the unborn scheduled to die by abortion.

“We cannot leave,” he said. “Innocent unborn children are about to be put to death and we have opted to stay with them.”

Trenton police removed and arrested the four pro-life advocates, The Trentonian report said, with Trenton PD Lt. Peter Szpakowski confirming they were each charged with trespassing.

The Trenton Planned Parenthood rescue was the 11th since September 2017, when the Red Rose Rescues began to return after similar “rescues” had fallen off from their early days in the pro-life movement due to federal legislation imposing harsh penalties. No one involved in the RRRs has been charged under the Freedom of Access to Clinic Entrances (FACE) Act, the federal law passed under President Bill Clinton aimed at stopping rescues.

In the more recent rescues, pro-life rescuers have offered the pregnant mothers a rose to convey their dignity as human beings, hence that portion of the rescues’ name.

Father Stephen Imbarrato, a leading pro-life advocate and regular RRR participant, was present for the Trenton rescue, but was not among those arrested. Father Imbarrato, who’d been arrested two days earlier at the Washington Surgi-Clinic rescue in Washington, D.C., remained outside praying the rosary at Trenton.

Imbarrato told LifeSiteNews it seems God has led him to do rescues where the abortions happen in multi-floor, multi-unit buildings. When abortion centers are set up this way, pro-lifers may not be able to identify the abortion-minded women or access them.

“Our Lord has shown me that we can still access and counsel these women to save their babies by going into the waiting rooms and/or the building common areas inside the building,” he said. “This has brought us many blessings stopping abortions from happening and saving babies.”

“Most Planned Parenthoods are difficult to access,” continued Imbarrato. “Even the one in Trenton had a guard. The four brave rescuers planned their entry well and reaped many blessings.”

He commented later in a Facebook post, stating, “11 Rescues in a little over a year have saved countless babies from abortion who otherwise would now be dead.”

The RRRs have two goals: to offer help and encouragement to the mothers in hopes they will turn away from the decision to abort their children, and to offer a loving act of defense on behalf of their unborn children about to be aborted – to stand with them in that moment of abandonment.

“This is why Red Rose Rescuers do not leave the abortion centers,” Miller said in a news release. “They do not leave – they must be removed.”

“We will go into the very places where the unborn are put to death and extend help to the moms,” Miller said. “Should this help be refused – we will not leave the abortion centers but remain in solidarity with the helpless victims oppressed by the injustice of abortion.”