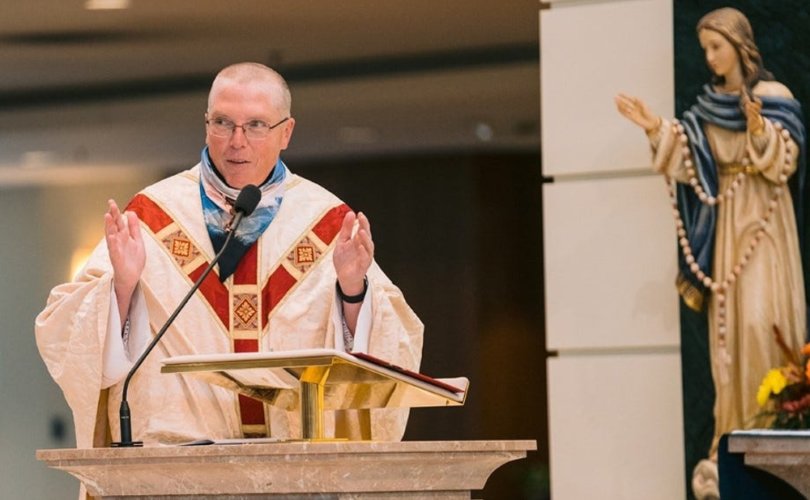 PLYMOUTH, MI, November 24, 2020 (LifeSiteNews) — A priest removed from his parish says he is being punished for speaking out against a “prominent” diocesan employee who sexually harassed a young man.

Fr Michael Suhy, 46, of the Archdiocese of Detroit was removed as pastor of Our Lady of Good Counsel in Plymouth, MI on November 17. A letter written to the parish by Auxiliary Bishop Gerard Battersby stated that Suhy had “become overwhelmed with the responsibilities, burdens, and challenges of administrating” the large parish. But Suhy believes he was removed for objecting to the continued employment by the Archdiocese of an active homosexual who counselled a young parishioner to engage in immorality.

In a statement dated November 20, 2020, Suhy revealed that a year ago the young man’s parents sent him a copy of a letter addressed to Archbishop Allen Vigneron. In the letter, the parents complained that a “prominent employee” of the Archdiocese of Detroit had been sexually harassing and “grooming” their son. Suhy stated that Vigneron had asked him to meet with the parents, and he sat down with them twice.

“Worst of all, perhaps, was the report that Archbishop H. Vigneron himself knew about his prominent subordinate’s homosexual relationship – and that he was accepting of it.”

Later, Suhy was told by a fellow priest that he had reason for concern that the prominent lay employee was behaving inappropriately towards young priests.

Suhy said in his statement that the matter amounted to a “cover-up” and the removal of a “whistleblower.”

“What we have here is nothing less than the selective and arbitrary enforcement of the Archdiocese’s policies against sexual harassment and abuse, a cover up of sodomitical vice being perpetrated by an Archbishop’s favorite, and the removal of a whistleblower pastor.”

Although the Archdiocese of Detroit investigated the complaints, the prominent employee was not removed. Suhy was told by the Director of Human Resources that “nothing could be done.” As a result, Suhy became “very upset” and expressed his opinions “vociferously, as any concerned pastor of souls would.”

LifeSiteNews has learned that Suhy repeatedly objected to the cover-up he saw being perpetuated by the Archdiocese of Detroit. After the Archdiocese failed to take appropriate action, Suhy went to multiple superiors. Unfortunately, they said they knew nothing of the matter. LifeSiteNews has also been told that the Archdiocese’s purported “process” against Suhy did not begin until after he began to complain about the purported cover-up.

LifeSiteNews has contacted the Archdiocese of Detroit for comment but has not received a reply.

Suhy has now been removed from his parish, but the subject of the misconduct investigation is still employed by the Archdiocese.

“As of this day, he continues to cohabit in his home with his male lover as a matter of public record,” the priest stated.

The “prominent” archdiocesan employee, reportedly a “favorite” of Archbishop Vigneron, is thus still in violation of the Archdiocese of Detroit’s Pastoral and Employee Code of Conduct.

The Code states that “Clergy, religious, staff and volunteers who are committed to a celibate lifestyle are called to be an example of celibate chastity in all relationships at all times” (4.1). This, then, precludes even lay employees from giving scandal by living openly with a lover and engaging in polyamory.

The Code also affirms: “Clergy, staff and volunteers must not engage in physical, psychological, written or verbal harassment of staff, volunteers or parishioners and must not tolerate such harassment by other Church staff or volunteers” (5). This includes “unwelcome sexual advances” and “sexual comments or sexual jokes” (5.2).

LifeSiteNews has learned Suhy had also hurt a few feelings, during his time at Our Lady of Good Counsel, by reintroducing traditional forms of worship to the parish. He was formerly a Benedict monk of Norcia.

Diane Korzeniewski, a former parishioner of Fr Suhy, gave a glowing testimony over social media about the priest.

“Fr. Suhy loves being a shepherd of souls and he’s very good at it,” Korzeniewski wrote on a Suhy’s prayer group Facebook page.

“He knows the faith, he teaches it with love and passion, and he is more than competent to handle a parish plus school,” she continued.

“I knew that statement by Bishop Battersby was cover for something else. I’ve seen too many priests side-lined under highly suspect excuses in this diocese, including my own pastor, Fr. Perrone. Fr. Suhy, by following his conscience, is one of many now lancing the boil in Archdiocese of Detroit.”

Roland Tuquero wrote, “Fr. Suhy is one of the most holy men I know and has a childlike quality and love of Christ.”

“Fr. Suhy has been nothing but pure virtue. He enabled parking lot masses and confessions during this pandemic when no other parish in the AOD offered this.”

The Archdiocese of Detroit’s refusal to dismiss its employee is in contrast to how it handled the case of 59-year-old Terri Gonda, former music director of St. John Fisher Parish in Detroit. Gonda was dismissed from her post by the Archdiocese this June after she contracted a civil “marriage” with another woman.

Fr. Suhy is to be replaced by an elderly monsignor, Msgr. Patrick Halfpenny, who was the vice-rector and dean of seminary formation at Sacred Heart Major Seminary when Archbishop Vigneron was its Rector.