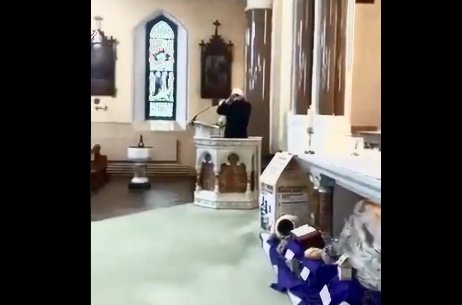 A Muslim man chants an Islamic prayer during a Mass at an Irish Catholic church last Friday.

COUNTY MAYO, Ireland April 7, 2020 (LifeSiteNews) — A Catholic priest in the Archdiocese of Tuam, Ireland, invited local Muslims to offer an Islamic prayer during a Mass last Friday that was live-streamed by the parish and broadcast over local radio.

While the prayer was reportedly offered for an end to the coronavirus, Catholic sources have since confirmed that what was sung was, in fact, the “Adhan,” the Islamic “Call to Prayer” that asserts Islam’s supremacy over Christianity.

Father Stephen Farragher, parish priest of St. Patrick's Church in Ballyhaunis, County Mayo, noted that “Friday is to the Muslim community what Sunday is to Christians” before inviting local Muslims Mohammed Cherbatji and Mohammed Rahmani to offer a prayer of “blessing” for an end to the pandemic and for all frontline healthcare workers.

Video of the prayer has been posted online. Church Militant reported that it contacted an Arabic expert and scholar in Islamic jurisprudence  who confirmed that the words were an “Islamic call to prayer, which conclusively and unambiguously asserts that God's revelation to Muhammad has supplanted and superseded God's prior revelations to Moses in the Old Testament and to Jesus in the New Testament.”

As Catholics in Ireland remain locked out of their churches on the eve of Holy Week @tuamarchdiocese decide to allow Muslims to hold Friday prayer on the altar alongside a priest #CatholicTwitter pic.twitter.com/dCN1USiB2H

It appears that there were no Catholic faithful present in the church at the time, with the church closed in response to the coronavirus.

Anthony Murphy, director of the Ireland-based Lumen Fidei Institute, told LifeSiteNews that the event was “a public and scandalous act of blasphemy” and that under Canon Law a penitential rite should be carried out in the church before it is used again for Catholic worship.

“The chant sung by the Muslims to conclude Holy Mass is known as the ‘Adhan’ and it is a triumphalist text which contradicts the doctrine of the Holy Trinity and proclaims Allah as the one true God,” Murphy said.

“So at the end of Mass instead of giving thanks in the normal way, we have a prayer recited which denies the Trinity – God is denied in His own house, in front of the tabernacle. It is important to note that these prayers took place during the Holy Sacrifice,” he continued.

“St. Patrick's Church has been desecrated by this blasphemy which was allowed to take place during the Holy Sacrifice of the Mass. The Holy Mass was broadcast on Midwest Radio so it constitutes a public and scandalous act of blasphemy. According to the Code of Canon Law, this Church should not be used for Catholic worship until the harm done has been repaired by a penitential rite and I now call on the archbishop to perform the penitential rite, which is prescribed in the liturgical books.”

Can. 1210 In a sacred place only those things are to be permitted which serve to exercise or promote worship, piety and religion. Anything out of harmony with the holiness of the place is forbidden. The Ordinary may however, for individual cases, permit other uses, provided they are not contrary to the sacred character of the place.

Can. 1211 Sacred places are desecrated by acts done in them which are gravely injurious and give scandal to the faithful when, in the judgement of the local Ordinary, these acts are so serious and so contrary to the sacred character of the place that worship may not be held there until the harm is repaired by means of the penitential rite which is prescribed in the liturgical books.

LifeSite wrote to Tuam Archbishop Michael Neary to ask whether in light of the events and canons 1210 and 1211 of the 1983 Code of Canon Law if he is considering carrying out a penitential rite in St. Patrick’s. No response was given by time of publication. LifeSite understands that Mass has continued to be offered at St. Patrick’s in recent days.

Murphy said the situation was particularly saddening as Catholics have had their access to churches denied in recent weeks while Muslims have been allowed to use a Catholic church for Islamic prayer.

“Here we have a situation … where the priest finds it easy to lock Catholics out of his church, but he invites Muslims in and makes his church safe for Muslims to pray – he abandons those under his pastoral care and invites others in and then allows them to blaspheme – it is absolutely scandalous. This priest should be ashamed of himself and I would expect any faithful bishop to take action against him.”