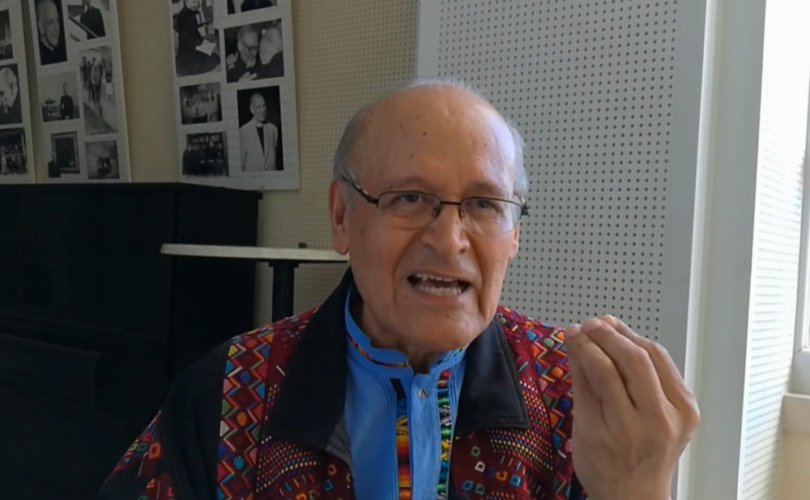 VATICAN CITY, October 24, 2019 (LifeSiteNews) ― A Mexican priest once investigated by the Congregation for the Doctrine of the Faith gave a speech today at a Holy See press office briefing during the running of the Amazon Synod in which he accused the Catholic Church of having been a colonial oppressor.

Fr. Eleazar López Hernández, a proponent of “[American] Indian theology” who belongs to the Zapoteca people, began his remarks at today’s post-synodal meeting press conference by regretting that he had to address the media in Spanish.

“The language of conquerors,” López remarked. “But, well, that has been the context in which we live. Five hundred years of an asymmetrical relationship.”

“I believe,” he continued, “that the synod is an expression by the Church, as an institution, of a desire for a new kind of relationship with indigenous people — not a colonial relationship, but a relationship between brothers and sisters.”

“For indigenous people, it is not possible to separate theology, science, and life,” he said.

“Everything is interrelated. Our people understand God as being involved in our reality. And I think that while this was not sufficiently understood by the Church, there are now conditions for receiving this ancestral theological word of the people that coincides with Jesus’s approach,” he continued.

López spoke favorably of change in the Church and said the change could be symbolized by contrasting the ships Christian missionaries boarded to come to the Americas with the “little canoes” used by indigenous people.

“The Church came to the indigenous people 500 years ago on the same ships on which came those who conquered us,” López said.

“Some missionaries understood that this was not their place, and thus went to the people,” he continued. “Over the last 50 years, there have been missionaries who have left ships and have entered our people’s little canoes. And they have walked with our people.”

López said Pope Francis had “come down” and been with them, giving the indigenous people the belief that they have the pope on their side.

The priest then referred to the expulsion of ambiguous naked female statues, identified as symbols of fertility, from a Catholic Church in Rome to say it should “not be the reigning attitude.”

“It is time for us to encounter each other as brothers and sisters,” he said. “To throw the images into the River Tiber should not be the reigning attitude. We have to discover a joint relationship as brothers and sisters in humanity and in the Church. I believe that the Synod has demonstrated that possibility.”

When discussing “unjust asymmetrical relationships,” López may have been referring to the controversies of over twenty years ago.

In 1996, the then-prefect of the Congregation for the Doctrine of the Faith (CDF), Joseph Cardinal Ratzinger, warned against aboriginal theology being used to demonize the Christian faith. Some theological movements, he said, “want to resurrect the rites, beliefs and religions of the Indians, as when they were before the Conquest, as if the Gospel had been oppressive. The conquest is [oppressive], but the Gospel is the salvation of man.”

In 2005, López was investigated by the CDF for allegedly misquoting the then-pope, giving a “simplistic interpretation” of the history of the Christian missions, and promoting syncretism. In a public self-defense, López argued that there was no syncretism among indigenous Christians, but “varied forms of religious synthesis.”

The Indian theologian’s brief summary of hundreds of years of missionary work could be considered simplistic. In the 1500s and 1600s, missionary friars in Latin America and Mexico wrote catechisms and hymns in native languages. The Church was essential in combining aspects of European, African, and American cultures into a new expression of the Faith. Bartolomé de las Casas, a Dominican friar who came to Mexico from Spain in the late 15th century, defended the humanity of the indigenous people he served there. In Paraguay, the Jesuits defended the indigenous people from slavery, taught them European music and crafts, and built churches that are still standing. In Guatemala, members of the indigenous Maya people were first ordained to the priesthood in the 1500s.

Colonial interest in the Amazonian interior began only in the late 1800s with the advent of the rubber boom.