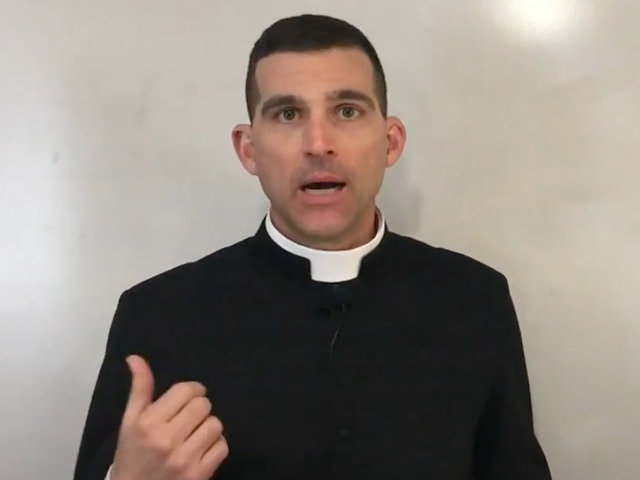 “Disobey your bishop, disobey your governor,” if they try to force you to wear a face covering, Father Daniel Nolan, FSSP quipped in a video that was briefly posted online.

His superiors said he is no longer to post videos on the Internet, and the Archdiocese told LifeSiteNews it is satisfied with the way the issue has been addressed.

Nolan serves at Our Lady of Mt. Carmel in Littleton, Colorado.

“They cannot tell you to wear a mask,” Nolan had said. “This is a lie. They are lying to all of us.”

“If you’re healthy, you have a 0.006 percent chance of dying from COVID,” Nolan noted, adding, “scamdemic,” a phrase popular with those who believe the global response to the coronavirus outbreak has been overblown.

“My next sermon is gonna get me, like, transferred, so enjoy me while you can,” the priest joked.

CNA first reported on the video, saying that “Church officials” were “evaluating” Fr. Nolan. Parishioners subsequently told Church Militant that they considered the CNA article a “hit piece” that “hyped off-the-cuff remarks made by Fr. Daniel Nolan that were inadvertently captured on video and posted briefly online Tuesday evening.”

The author of the article was J. D. Flynn, CNA’s editor-in-chief.

CNA journalist Kevin Jones, who said on Twitter that Our Lady of Mt. Carmel is his home parish, called his priest’s remarks “an unfortunate and petty act of rebellion against the mask mandate aiming to limit coronavirus spread.” Jones then suggested he was “stay[ing] away” from the parish because of “yellow flags” and “anti-mask signaling.”

Fr. James Jackson FSSP, Nolan’s pastor, sent a short message to parishioners explaining CNA hadn’t given him adequate time to answer their inquiry. He suggested that the matter is already essentially resolved.

In the message, which was obtained by LifeSiteNews, Jackson wrote, “The title of the article says ‘Church officials evaluating priest who told Catholics to ‘disobey’ bishop on mask wearing.’ This is not correct. It was published yesterday [September 2], but the evaluation is over.”

Jackson told his parishioners that when CNA contacted him, “I hadn’t seen the video, and I asked for time to see it, to ask Fr. Nolan about it, and to consult my superior and the Archdiocese. Basically the reporter gave a couple of hours to accomplish all this, but I had other things which needed to be attended to, so I didn’t give a statement. So, the reporter published his article without input from me, which by now a good number of you have read.”

“The consequence to the video is that Fr. Nolan is forbidden by our superiors from uploading things on the internet,” wrote Fr. Jackson. “The duration of this interdict has not been determined. Other than that, no other consequences from the Church will be forthcoming.”

Meanwhile, the vicar general of the archdiocese, Fr. Randy Dollins, “was of good cheer, extremely helpful and supportive,” reported Jackson. “I can’t tell you how much I was impressed by him.”

FSSP priest: Mask mandates now but ‘in the future, it’s going to be a vaccine’

Fr. Nolan, who was ordained in 2014 after serving in the Marine Corps as a Captain, said in early August that he was personally refusing to wear a mask anywhere.

During an interview with “Restoring the Faith” on YouTube, he said, “I think it’s important. I think this is where civil disobedience comes in, and we are absolutely within our rights.”

Nolan drew a parallel between resisting mask mandates now, and having to resist a mandatory coronavirus vaccine in the future.

“You will lose everything,” Nolan warned. “This is our last chance to stand up and resist.”

At this point, the priest made it clear that he was only expressing his personal opinion.

“That is not the decision of the Church, the Fraternity [of St. Peter], or my parish. That’s Father Dan Nolan, and I encourage everybody: Be bold. Stand up. It’s uncomfortable, but if you really don’t want to wear a mask, don’t wear it. Make them ask you. Be polite.”