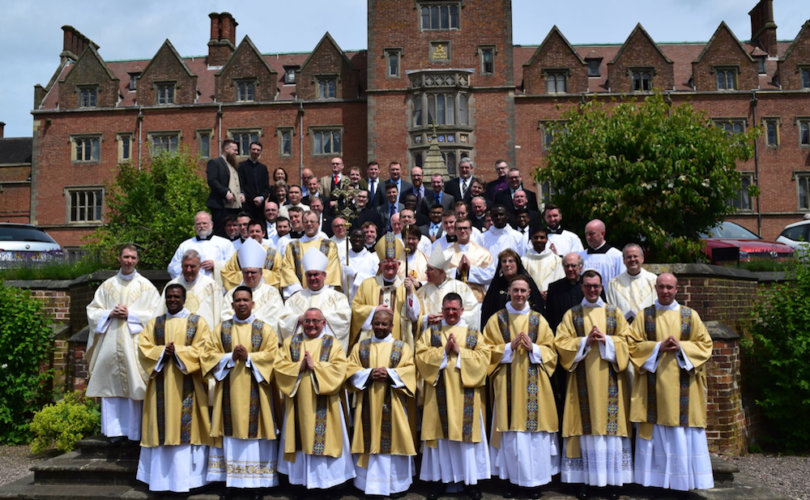 NEW OSCOTT, England, October 18, 2018 (LifeSiteNews) — A priest from Oscott College in England has spoken out on the gay subculture in a leading seminary there, making serious charges against the rector and stating that the bishops of England and Wales are lax on homosexuality.

In an open letter to the bishops of England, Scotland and Wales, Father David Marsden, S.C.J., former formation tutor at St. Mary’s Seminary at Oscott College, said he was terminated from his position for trying to uphold the Catholic Church’s teaching on homosexuality, and appeals to the bishops to clean up England’s seminaries for the sake of the faithful men trying to pursue a vocation to the priesthood.

“I am writing to you all with a petition to act and take the necessary steps to reform the three remaining seminaries in England,” Marsden said. “The orthodox and heterosexual seminarians deserve a seminary free from a gay subculture and free from academic and formation staff who are homosexual themselves.”

St. Mary’s, Oscott in New Oscott, Birmingham, commonly known as Oscott College, is the Roman Catholic seminary of the Archdiocese of Birmingham in England, and one of the Church’s three seminaries in England and Wales.

Marsden cast his plea against the overall sexual abuse crisis that has rocked the Church over the last several months, specifically calling out the cover-up and enabling, and he said there is still an absence of accountability for bishops.

“This approach is clearly ignoring the Church's teaching on this vital issue, yet for some strange reason, bishops are still not being made accountable for disregarding this important instruction,” he said. “Whilst the teaching is clear, the practice in so many dioceses is deeply compromised. Can I make a huge plea that something be done about this widespread abuse?”

Marsden said he prays the Holy Spirit is now purifying the Church’s hierarchy with the ongoing exposure the evil acts committed by homosexual clergy around the world. And he believes it’s his duty to inform the bishops and other Catholics that “the homosexual collective within the hierarchy which enabled McCarrick to function in an unobstructed manner is still alive and well today in the Catholic Church in England and Wales.”

Marsden condensed his observations after a year at the seminary into five points in his open letter to the bishops, covered in a Church Militant report.

First, some seminarians are sent to St. Luke’s Center in Manchester for psychological assessment as part of the selection policy.

The facilities director, Marsden said, “has some very strange views on homosexuality himself and seems happy to admit homosexual men into the formation program.”

St. Luke’s Center is the U.K branch of Saint Luke Institute, prominent mental health treatment facility based in Maryland specializing in Catholic clergy, particularly those afflicted by sex abuse tendencies. It was founded by an openly gay man who became a priest and later died of AIDS. The Institute is controversial for, among other things, charges of using homosexual and pedophilia-affirming theories and treatment techniques involving pornography.

Marsden’s second point delves into the allegations against the seminary rector, Canon David Oakley, whom Marsden said fired him for recommending that an openly gay seminarian discontinue the program of formation.

“Canon David Oakley is prepared to admit homosexual men into his seminary and will not dismiss them unless their public conduct becomes unsavory,” he stated. “He is a compromised and cowardly man who is not prepared to make a stand and disagree with the bishops on the issue of homosexuality.”

Marsden continued, saying some among the English and Welsh bishops are “happy to admit seminarians who are openly gay into the formation program and proceed towards ordination,” and he cites the bishop of Menevia.

The Vatican has definitively declared more than once a prohibition on ordaining homosexual men.

In Marsden’s fourth example, he reported that a spiritual director for the Oscott Seminary has admitted sexual attraction to young men, further implicating Oakley in letting this pass.

“It is highly inappropriate that such an individual hold such a post,” Marsden said of the first spiritual director.

“The rector is aware of this fact but seems unable to confront this individual,” Marsden stated. “He even noted that the friends who accompany this individual for holidays each year are also homosexual.”

“Apparently, the policy in Oscott appears to be if a candidate is not ‘acting out’ his homosexual tendencies at the moment or behaving in an inappropriately ‘camp’ way,” Marsden said, “then he is free to follow the formation program and move towards holy orders. “

“The rector will not dismiss a candidate from the seminary who admits to being ‘gay’ out of fear that his bishop will not agree with his decision,” he added. “The problem, therefore, quietly continues.”

Marsden continued, “Another of the spiritual directors in the seminary thinks that homosexual priests are a great idea as they can minister to the gay Catholic community.”

In Marsden’s final point, he stated specifically that the archbishops of both Birmingham (Bernard Longley) and Westminster (Vincent Nichols) have been made aware of these issues and “seem to prefer to ignore them.”

“Why do we continue to have such passive and feeble-hearted clerics in such high places of leadership in the Church?” he asked. “Why are they afraid to speak out on topics such as homosexuality in the clergy and the toxic gender ideology sweeping through our schools?”

In light of the testimony report from Archbishop Viganò, Marsden said, it is all the more apparent that “the homosexual cabal operating in the Catholic Church exists at the very highest level and even incriminates Pope Francis himself.”

The dissent from Catholic teaching on sexuality persists, Marsden stated, and it’s killing the priesthood.

“In light of the McCarrick scandal and the Viganò report,” he says, it has become very clear that cardinals, bishops and senior clergy from around the world are still openly dissenting against the Church's teaching that prohibits the entrance into seminary formation of men with a homosexual orientation.”

“This is the root cause of the most pressing scandal of our times,” Marsden said. “In fact, it is destroying the priesthood from within.”