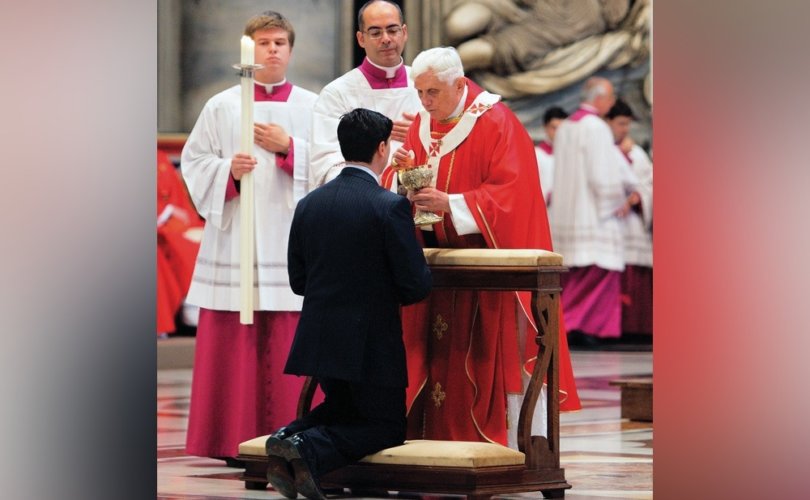 HOUSTON, January 14, 2019 (LifeSiteNews) — Observing that the world is doing “what is evil in the sight of God,” a priest is calling on Catholics to return to the ancient practice of receiving the Holy Eucharist while kneeling as an act of reparation.

In one of his daily video reflections, titled How to Avert World War 3, Fr. Mark Goring alluded to fears among some that an apocalyptic war is imminent.

He affirmed that “God sends chastisements when His people go astray.”

The priest said Catholics should not wait to plead for God’s mercy. Rather than making statements or issuing documents, Fr. Goring said, “I believe that as a Church we should express our repentance before the Lord and plead for mercy in concrete, tangible ways.”

Fr. Goring called on the entire Church, “as a sign of our repentance, as a sign of acknowledgment and adoration of Our Lord in the Holy Eucharist,” to return to the practice of receiving the Eucharist while kneeling.

“Is receiving the Eucharist on our knees going to fix all the world’s problems? I think it will,” he said.

Reciting Revelation 7:11, he said, “All the angels stood around the throne, and around the elders, and the four living creatures; they prostrated themselves before the throne of God, and worshipped.”

Around the time of the Second Vatican Council in the early 1960s, the ancient practice of receiving Communion while kneeling began to fall away.

An article published on the Vatican website, which Fr. Goring mentioned, provides a history of the practice of receiving the Holy Eucharist since the first century after the death and resurrection of Jesus Christ. While it acknowledged that in the earliest days of the Church the Eucharist was probably received in the hand, it noted a change in this practice came early on.

The Vatican website said that starting in the time of the Fathers of the Church, the distribution of the Eucharist became more restricted “in favor of distributing Holy Communion on the tongue.”

There are two stated reasons for this: “a) first, to avoid, as much as possible, the dropping of Eucharistic particles; b) second, to increase among the faithful devotion to the Real Presence of Christ in the Sacrament of the Eucharist.” St. Thomas Aquinas, known as the Angelic Doctor for his huge contributions to theology, referred, for example, to receiving the Eucharist on the tongue, and added that “touching the Body of the Lord is proper only to the ordained priest.”

Additionally, the article said, “The Western Church has established kneeling as one of the signs of devotion appropriate to communicants. Kneeling indicates and promotes the adoration necessary before receiving the Eucharistic Christ.”

Citing then-Cardinal Joseph Ratzinger and future Pope Benedict XVI, who wrote in The Spirit of the Liturgy, “Communion only reaches its true depth when it is supported and surrounded by adoration.”

Benedict added that “the practice of kneeling for Holy Communion has in its favor a centuries-old tradition, and it is a particularly expressive sign of adoration, completely appropriate in light of the true, real and substantial presence of Our Lord Jesus Christ under the consecrated species.”

According to Fr. Goring, the article is a reminder of the importance of “truly adoring the Lord, before and while we are receiving Him in the Holy Eucharist.”

Confident that receiving the Body and Blood of Jesus Christ on the tongue while kneeling can actually solve the world’s problems, Fr. Goring said finally: “I believe that this one simple but real gesture can avert wars.”

Fr. Goring is a member of the Companions of the Cross, a congregation of Catholic priests founded in 1985 by Fr. Robert Bedard.