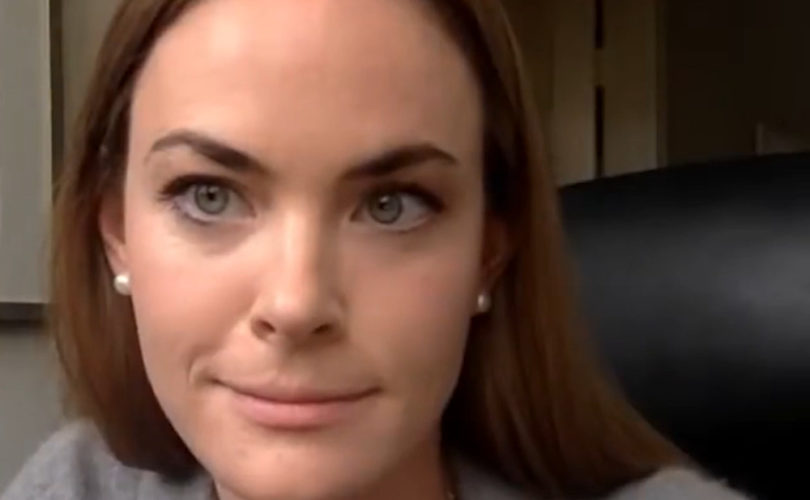 DALLAS, Texas, March 31, 2021 (LifeSiteNews) — After the local parish priest called the cops, a pregnant mother was threatened with a trespassing charge for attending Mass without wearing a mask.

In a recent interview, Deirdre Hairston told Catholic commentator Dr. Taylor Marshall that she had been at Sunday Mass at Holy Trinity Catholic church in Dallas with her husband and one-year-old baby when she was approached by the pastor, Fr. Milton Ryan. She said Ryan told her that if she didn’t put on a mask, he would call the police and have her arrested.

The pastor made good with his threat. After returning from Holy Communion with her baby in her arms, Hairston saw three police officers at the back of the church, where she and her husband had been socially distanced from the rest of the congregation. Having not yet consumed the Host, Hairston knelt down upon returning to her seat, only to be told at once to get up.

Hairston’s husband recorded a woman police officer saying to the young mother, “Ma’am, I’m going to put you in handcuffs if you don’t stand up.”

Hairston asked what crime she had committed, and the officer stated that that the “church” did not want her there and that she was trespassing. The young mother insisted that she was not breaking any law, and the police repeatedly told her that the church was a business. Although Texas no longer has a mask mandate, some businesses are still asking people to don masks before coming inside.

Fearing for the safety of her infant child, Hairston left the church with the officers. She said that after she did so, an usher ran into the parking lot to take photographs of her car license plate, shouting, “Write her up! Write her up!”

“It almost reminded me of, not to flatter myself, but it was like, ‘Crucify her! Crucify her!’” Hairston told Marshall.

Hairston and her husband continued to film and to remonstrate with the police, saying that wearing a mask is not a requirement. The officer said, however, that the church required one. When Hairston explained that “that one man is not the church,” the officer replied that the priest was a “representative of the business.”

“This is not a business,” Hairston insisted. “This is a church!”

“Somebody owns it,” the officer replied.

Hairston reflected later that the bishop of Dallas, who was not present, does have jurisdiction over the church building.

Hairston’s husband told the police that Fr. Ryan had been verbally abusive to his pregnant wife. To the argument that the church is a business, the young man explained that it is a 501(c)(3), that is, a charitable organization.

Hairston was not fined but given a ticket that said she could never again go back to her church without being arrested. She remarked to Marshall that although she’s a Catholic in the state of grace, she has been de facto barred from the sacraments, which is against canon law.

“Our own government is more lenient [about masks] at this point than our church,” Hairston told Taylor Marshall, “and that’s a problem.”

“You’re more likely to be treated with Christian charity and grace at a Taco Bell than you are at church, unfortunately.”

The young mother also said that Catholics need to “wake up” about the situation in their churches.

She said, “People need to wake up to realize that this is … the state of our church right here, right now, and we need to stand up. The church belongs to us; we are the laity. That priest — the church does not belong to him. We can’t allow these things to happen.”

Hairston wonders if parish mask mandates are really about health, or if they are about control.

The Diocese of Dallas issued a statement on March 29, two days after Marshall interviewed Hairston, and just over two weeks after the incident took place. The statement said that the young woman “was not arrested or ticketed” but “issued a trespass warning.”

“The pastor of the parish has required masks at Mass out of concern for the health and welfare of his entire congregation,” it reads.

“Canon law grants pastors jurisdiction over their parishes, and while the bishop has not mandated masks for every parish, he has left these specific details to the pastors of the Diocese, adding that he expects the faithful to wear masks out of charity and concern for others,” it continues. “We recognize that not everyone can wear masks, but that those who can, should.”

The Diocese added it was “looking into the details” of the incident.

In his Palm Sunday homily, Fr. James Altman blasted priests and bishops who indulge in the “godless madness” and “godless fear” of the coronavirus at the expense of the faithful.

“A priest in Dallas, Texas, called the police to arrest a woman for trespassing in that parish because she, who was carrying a child in her womb, and holding her one-year-old baby in her arms, was sitting way in [the] back, not near anyone but her family, but was so lightheaded due to being with child that she could not wear a mask,” he said.

“That priest, that imposter of a priest, called the police,” he continued. “Bishop of that parish, what kind of priest are you allowing to operate in your diocese, or — worse — what kind of mindset have you inculcated into the priests of your diocese?”

Altman said that if priests can’t get over their “abundance of cowardice masquerading as ‘caution’” to fulfill their vocation, then they are overdue for the “millstone” treatment.

“Amen, amen, I say to you that if such shepherds as that represented the truth of the Catholic Church, I’d be out the door,” Altman said.

“I’d be the first one out that door and I would never look back. But you and I, we know better,” he continued. “They do not represent the Catholic Church, only the depths of hell to which some of them have fallen.”

Altman acknowledged that his words might seem “strong,” but that it was Palm Sunday, and they had all just heard the Passion of the Lord Jesus Christ. Earlier in his homily, he assured his congregation that if hell “has many levels,” like those described in Dante’s Inferno, “the lowest, hottest levels are the final burning place for those shepherds who were complicit in the godless [COVID-19] restrictions.”

“Like … some of those Texas shepherds who refused the government exemptions,” he added.

LifeSiteNews has contacted both the Diocese of Dallas and Fr. Milton Ryan, but has not received a response.