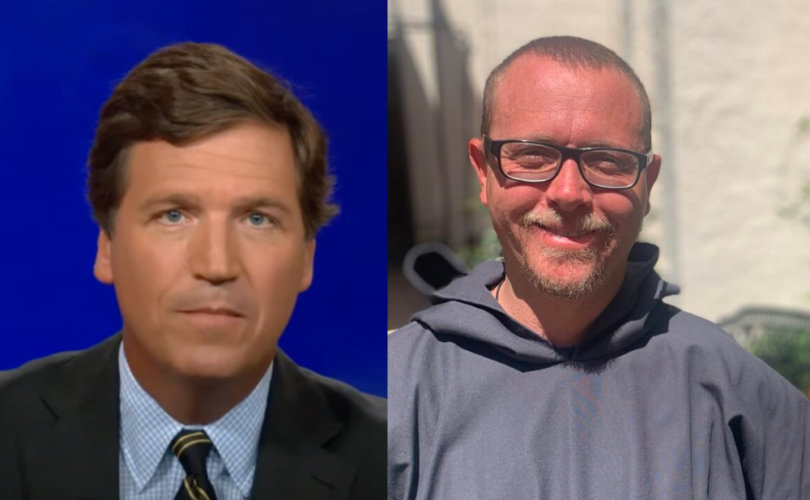 “Tucker Carlson (an Episcopalian) had the most openly Christian segment I’ve ever seen him do tonight,” wrote Fr. Nix. “He repeatedly talked about persecution against Catholics in the US this weekend. Now is our chance to inspire evangelicals to become Catholic by fortitude in suffering well.”

Tucker Carlson (an Episcopalian) had the most openly Christian segment I've ever seen him do tonight. He repeatedly talked about persecution against Catholics in the US this weekend. Now is our chance to inspire evangelicals to become Catholic by fortitude in suffering well.

Yes, defend your families and Churches. But if there comes a moment when God allows our enemies to crown us with the eternal and imperishable crown of martyrdom, let’s not be found complaining about it on Twitter.

Doubling down on his exhortation to martyrdom, Fr. Nix wrote in a separate message: “They threw a Molotov cocktail inside the crisis pregnancy center in WI much like they put burning chemicals into the uterus to kill a baby. Which is worse? We should brace for more persecution if we truly ‘stand with the unborn’.”

In his May 9 opening monologue, Carlson addressed the wave of vandalism and violence which has been launched against pro-lifers by pro-abortion supporters in light of a leaked Supreme Court draft opinion, which looks set to overturn Roe v. Wade.

“This isn’t just about intimidating Supreme Court justices, five of them, into changing their views on Roe v. Wade,” he said. “It’s about attacking Christianity because Christianity stands in their way.”

Carlson, while an Episcopalian, also called out Joe Biden over his self-identification of “Catholic” while not taking action to prevent pro-abortion protestors’ plan to “burn[] the Eucharist to show our disgust for the abuse Catholic Churches have condoned for centuries.”

“Joe Biden purports to be a Catholic,” said Carlson, “But no. The Biden administration did not try and stop this.”

A 2017 New Yorker magazine report described Carlson as an Episcopalian who “loves the liturgy, though he abhors the liberals who run the denomination.”

Yet analyzing Carlson’s recent coverage of the anti-Catholic vandalism, Fr. Nix suggested that the veteran news host could be open to conversion and join other evangelicals who have converted to the Catholic faith. Such a work of evangelization is drawn from the words of Christ at the close of St. Matthew’s Gospel, when He commanded the disciples to “teach ye all nations; baptizing them in the name of the Father, and of the Son, and of the Holy Ghost. Teaching them to observe all things whatsoever I have commanded you.”

This has been echoed throughout the Catholic Church’s teaching, particularly in the 1949 letter from the Holy Office to the Archbishop of Boston, noting that:

Not only did the Savior command that all nations should enter the Church, but he also decreed the Church to be the means of salvation, without which no one can enter the kingdom of heavenly glory.

Such teaching was already pre-empted in 1928 when Pope Pius XI issued his encyclical Mortalium Animos on the subject of religious unity.

In setting out the position of the Church regarding ecumenical matters, Pius XI wrote: “It follows that there can be no true religion other than that which is founded on the revealed word of God: which revelation, begun from the beginning and continued under the Old Law, Christ Jesus Himself under the New Law perfected.”