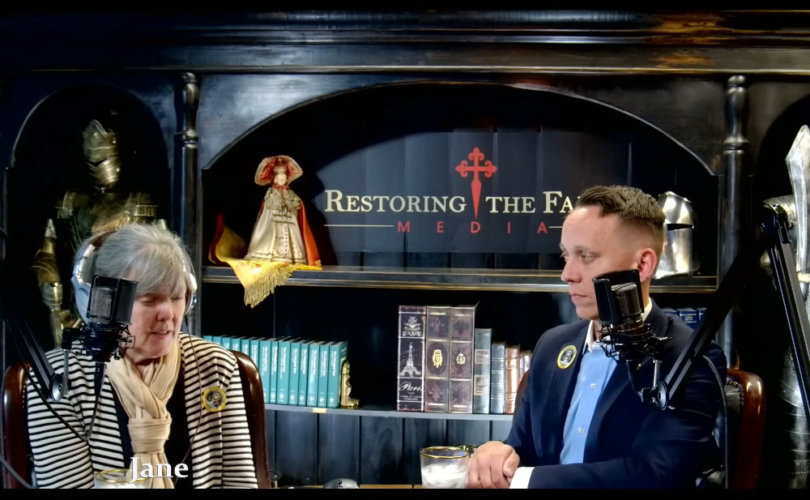 Mother of 11 interviewed by Restoring the Faith Media

KANSAS CITY, Missouri, November 24, 2020 (LifeSiteNews) — The pastor of a Catholic Church in Kansas City, Missouri, had a woman arrested as she prayed with her children in the pews of Our Lady of Perpetual Help Church for refusing to wear a mask, despite instructions in the church’s previous Sunday bulletin and the diocesan website stating that masks are required “except when remaining in the pew.”

The mother of 11 children, six of whom are adopted, said in an interview with Restoring the Faith Media that she came to the church with her family to pray Vespers, as she does every year on Halloween. She had arrived early and was praying private devotions with her husband and children when police arrived and arrested her, at the request of the church pastor, Rev. Gary Ziuraitis, C.Ss.R.

The bulletin issued by Our Lady of Perpetual Help Church on October 25 reads, “In accordance with diocesan rules and the current Kansas City ordinance, everyone must wear a mask in church, unless you are seated in your pew.”

The Kansas City police incident report says the pastor told the officers that the mother, whose name she wishes to remain anonymous, was not wearing a mask when she entered the church, and neither were her children.

The mother said that the keyholder of the church yelled at her and her children as they entered for not wearing masks, even though no one was in the church at the time. She continued on to a pew to pray the Divine Mercy chaplet with her children, after which, she reported, the pastor approached them, without wearing a mask himself, and told her that she would have to put on a mask or leave the church.

The police report says, “It is not the Police Department’s position to enforce the mask ordinance in KC, the Health Department does that here. It was [the pastor’s] request that we ask her to leave or arrest her for trespassing.”

The report continues, “About 7 pm the pastor called and relayed to the officers that in addition to the order by Mayor Lucas to wear a mask, it’s the policy of the Catholic Diocese that everybody inside the church wear a mask. There are several signs outside the Church indicating masks are required.”

The website of the Diocese of Kansas City-St. Joseph currently states, “The faithful are obliged to wear a mask upon entering the church and during the celebration of Mass, except when remaining in the pew [emphasis in the original] unless the local city/county health directives so require and for the brief moment of receiving Holy Communion.”

Not only does the bulletin of Our Lady of Perpetual Help Church restate this exception for those in a pew, but the church is what the mother described as a “monstrosity of a cathedral the size of a football field.” It seats up to 800 people, and has the “longest aisle in Kansas City,” according to the church website.

The bulletin itself said regarding the All Saints Vespers service that evening, “We have plenty of good, safe space in the Church for you to come and enjoy this beautiful hour of prayer.”

LifeSiteNews reached out to Our Lady of Perpetual Help Church, which declined to comment on the mother’s arrest. LifeSiteNews has also reached out repeatedly to the Diocese of Kansas City-St. Joseph, but has not received a response.

“Nobody’s asked me to mask for six weeks in any store in Kansas City,” the mother said.

When asked what she thought was wrong with wearing a mask, she said, “If I was made to do that, I would probably faint or throw up. I really physically know I couldn’t mask in church. I just have to go with my gut, and that’s what I did.”

“I did lean on some interviews I saw with priests that were encouraging not to mask and that gave me hope,” she added.

The diocese’s communications office has stated, “The Diocese has no objection to charges being dismissed against the disruptive attendee but that decision would need to be made by the arresting officer.”

However, the Kansas City police said, “The decision to drop the charge of trespassing would be between the Church and Municipal Court.”

The mother was emotional as she recounted how one of her children, Mary, who is autistic, had noticed her rosary fell to the floor as she was being handcuffed, and asked why the police had thrown her rosary down.

The mother had told her, “’Mary, I don’t think they threw my rosary on the floor, I don’t know what happened, but they had to handcuff me, so my rosary was in my hands, and it probably just fell to the floor.’ Mary picked it up and put it in my purse.”

The mother was asked what she would say if she had an opportunity to address the chancery.

“First of all, anyone who has the right to right this — it has to be done. And is it gonna be done? No, I don’t think it’s gonna be done until people say, ‘Stop it. I want my holy water back. I want my confessional. I want my singing. I want my church back.’”

“This is our church, guys. We have to do something. We can’t wait. Now is the time. We cannot wait until the second lockdown. No, that’s going to be too late,” she continued.

“‘Oh, the second lock down, I will get handcuffed, I will do it then.’ No, now. We have to stay in the fight, we are Church Militant.”